Hematite is a low band gap, earth abundant semiconductor and it is considered to be a promising choice for photoelectrochemical water splitting. However, as a bulk material its efficiency is low because of excessive bulk, surface, and interface recombination. In the present work, we propose a strategy to prepare a hematite (α-Fe2O3) photoanode consisting of hematite nanorods grown onto an iron oxide blocking layer. This blocking layer is formed from a sputter deposited thin metallic iron film on fluorine doped tin oxide (FTO) by using cyclic voltammetry to fully convert the film into an anodic oxide. In a second step, hematite nanorods (NR) are grown onto the layer using a hydrothermal approach. In this geometry, the hematite sub-layer works as a barrier for electron back diffusion (a blocking layer). This suppresses recombination, and the maximum of the incident photon to current efficiency is increased from 12% to 17%. Under AM 1.5 conditions, the photocurrent density reaches approximately 1.2 mA/cm2 at 1.5 V vs. RHE and the onset potential changes to 0.8 V vs. RHE (using a Zn-Co co-catalyst). View Full-Text
Keywords: hematite; cyclic voltammetry; photoelectrochemical performance; oxygen evolution reaction (OER) catalyst; nanorods hematite; cyclic voltammetry; photoelectrochemical performance; oxygen evolution reaction (OER) catalyst; nanorods
►▼ Show Figures 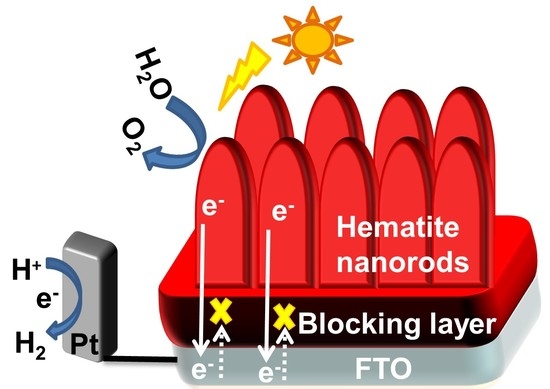