Archaeology, The Academy, and Women: Finding One’s Own Path
Next Article in Special Issue

Archaeometallurgical Analyses on Two Renaissance Swords from the “Luigi Marzoli” Museum in Brescia: Manufacturing and Provenance

:
Miniaturized bronze flasks represent a small portion of a wide metallurgical production that flourished in Sardinia (Italy) between the Final Bronze Age (FBA) and the Early Iron Age (EIA). They replicate a well-known and symbolic type of object, the pilgrims’ flask, common in all Europe and Mediterranean basin, and have but few archaeological parallels. For these reasons, their characterization can be considered important from an archaeological perspective. Three flasks, preserved at the Antiquarium Arborense museum (Oristano), were analyzed by X-Ray Fluorescence Spectroscopy (XRF) and Raman spectroscopy, integrated by multispectral images. The samples, coming from illegal excavations, posed two problems: establishing their authenticity and investigating the alloy composition of such particular objects. All specimens presented a widespread degradation in the outer surface: XRF and Raman spectroscopy indicated the presence of copper oxides, calcium and copper carbonates deposits. The abscence of Zn, a clear marker of forgeries, was not detected by XRF. In two of the flasks, an unusual Sn content above 20%, was detected. For FBA and EIA, especially regarding southern Europe, Sn was extremely rare, and was possibly used with caution. Further results are presented herein.
Keywords:
Sardinia; miniature bronze objects; pilgrim flask; XRF; Monte Carlo; Raman

In the period between the Final Bronze Age and Early Iron Age in Sardinia, the Nuragic civilization was responsible for a large and diverse metallurgical production, mostly with bronze [1]. Bronze flask pendants are miniaturistic reproductions of similar Early Iron Age ceramic vessels [2,3,4,5] that replicate the basic characteristics of the pilgrim flask’ prototype: they have a flat-convex body with a truncated cone shape decorated with concentric grooves, four handles, and a long cylindrical neck surrounded by stylized straps that end with an original ring of suspension.
Nineteen (19) miniature bronze flasks have been found in Sardinia and the Italian peninsula (Figure 1): one from an unknown site [4], one from Nughedu San Nicolò [2,3,6], one from Borore [2,3], two from the nuraghe Nurdòle-Orani [2,3], two from the sacred well of Su Tempiesu-Orune [2,3,7], one from the sanctuary of Su Monte-Sorradile [4], one from Mont’e Prama-Cabras [8], and four from the territory of Sinis [9], but without a proper archaeological context. The remaning six flasks come from the Etruscan necropolis of Montaione [10], San Cerbone-Populonia [10] and Vetulonia [10]. The flasks from Sinis area (Figure 2) [9], recovered during a police operation in 1992, are currently preserved in Oristano (Sardinia), at the museum Antiquarium Arborense.
Due to the relative rarity of these miniature bronze flasks, many questions remain open. First, their use and importance within the Nuragic civilization and, second, their authenticity. Three of the four flasks thought to belong to the Sinis region were investigated in this work. It is not uncommon that forgeries are inserted among authentic lots [11], so an authenticity check is almost always mandatory. Furthermore, they lack a proper archaeological context and were obtained possibily through illegal excavations. The flasks were retrieved by the police and their authenticity and/or site of origin is unknown.
These flasks are the first and only miniature pilgrim bronze flasks to be analyzed with multispectral techniques. Their bulk material chemical composition, representing the alloy originally used for the artifact manufacture, was obtained with X-Ray fluorescence (XRF) analyses coupled with a Monte Carlo algorithm (XRMC) capable of simulating X-rays interactions with matter [12,13].
The corrosion products, deposited in the objects’ surface through the course of time, were investigated with Raman spectroscopy and with the XRF-XRMC method. The patina can be used as an indicative of the object’s originality, as millenia-old corrosion layers are very hard to replicate artifically [14]. Furthermore, the patina can also provide information regarding the depositional conditions of the artefact [15].

X-ray fluorescence analysis (XRF) is a well-known and non-destructive technique frequently used in archaeometry [16]. It is portable and capable of determining the chemical composition of the sample under investigation. Due to the penetrative nature of X-rays, the results obtained with XRF alone when investigating corroded artefacts, reflect the composition of the outermost layer instead of the bulk [17,18]. To overcome this problem, we made use of a Monte Carlo algorithm capable of simulating X-rays interaction with matter. This is achieved by simulating the experimental parameters (tube profile, setup geometry, etc.) and the sample itself (layers and composition). In this way, the sample parameters can be used to determine, with a quality superior to that obtained with XRF measurements, the real composition of the sample bulk, as well as determining the layers and their spatial distribution [13]. An initial guess of the patina layer composition was obtained with Raman spectroscopy.

The XRF experimental system used is composed of an X-ray tube (Amptek’s Mini-X, Ag anode) operating at 40 keV, 5–20 A and one X-123 SDD detector (also from Amptek). The unfiltered X-ray spectrum was collimated to 1 mm diameter, while no detector collimation was applied. Each measurement took approximately 60 s. Several spectra were collected at different spots, to assure repeatability.

Near-Infrared (NIR) micro Raman scattering measurements were carried out in backscattering geometry with the 1064 nm line of an Nd:YAG laser. Measurements were performed under standard temperature and pressure conditions (STP) with a compact spectrometer (B&W TEK, Newark, NJ, USA) i-Raman Ex integrated system with a spectral resolution of less than 8 cm.
The spectra were collected with different acquisition times, between 20 and 80 s, and power excitations between 20 and 30 mW concentrated in a spot of 0.3 mm of the surface through the BAC151B Raman Video Micro-Sampling System. A 20× Olympus objective was used to select the analysis spots.

First, the XRF system response has to be fully characterized. This includes a precise digital reproduction of the system geometry and the X-ray detector response. Then, fluorescence peaks detected in the spectrum under simulation are used to build a guess model of the sample. The sample layers are first modelled according to an initial guess, prior the iterations that follow. The patina/corrosion layer composition and the protective layer (if any) parameters are initialized according to the Raman spectroscopy outputs and a careful visual inspection.
Following the creation of the initial sample model, a simulation is performed. The measured and simulated spectra are compared. The sample model is updated iteratively after each simulation, until it returns a perfect reproduction of the experimental XRF spectrum. When this is obtained, the simulated model, both in composition and structure, can be considered a faithful reproduction of the real sample.
This approach has shown a superior performance when compared to the more traditional approaches, based on background extraction and peak fitting, such as the Fundamental Parameter Method [19,20,21,22]. The Monte Carlo code used here is XRMC [12,23,24]. It is specialized for any type of X-Ray interaction with matter up to 100 keV of energy, well above the typical energies used in XRF. It is based on a continuously updated atomic database called xraylib [25]. This Monte Carlo code is fast, allowing one to obtain a good quality simulation, comparable to that from the real XRF experiments, in a handful of minutes, even on a laptop computer. XRMC performance is reported in [13], together with a minute description of its applications for Cultural Heritage materials.
Finally, the flasks investigated were modelled as a two or three-layered structure of infinite parallel planes accordingly. The modelled layers were: the protective film (if present), the patina/corrosion layer, and, lastly, the bulk, i.e., the alloy. The corrosion layer can be sub-divided into two or more layers, according to the modelled sample, as corrosion strata of ancient bronzes can present multiple complex layers [26,27]. The Monte Carlo code was executed on a laptop (Intel® Core i7). Each simulation took approximately 4 min.

Three miniature bronze models of pilgrim flasks have been analyzed. Their composition turned to be essentially a binary Cu-Sn alloy for flask #1 and a ternary Cu-Pb-Sn for the remaining two. No zinc was detected, scoring in favor of the miniatures’ authenticity, and addressing the first research question. All flasks presented a very high weight percentage of Sn in their alloy composition. The possibility of tinning was dismissed as the models made with a thin tin-rich layer on top of the bulk resulted in mismatching spectra.
Tin was a relatively rare and precious metal in Sardinia and the south of Europe during the LBA and EIA, being most of it imported from outside the island. The excessive amount of Sn detected is surely intentional and possibily with a specific objective/application in mind. One of its most common use in metalsmithing is to strenghten the material, confering it more tensile strength. However, such quantities of Sn would make the metal more difficult to work instead [27]. Furthermore, it seems unreasonable to spend so much precious material to improve the mechanical properties of an object unlike to benefit from such improvements.
The more credible explication, is related to the nature of the objects themselves, i.e., being a pilgrim flasks’ reproduction, and possibly a votive or otherwise iconic object that could be worn. The addition of Sn changes the final product colour, turning it more silver-like as Sn content increases [27,38]. Combined with the inherit value of the metal, Sn can render the object more “precious”, from a votive perspective as well. These results are entirely new and fuel a new interpretation of such objects. Future works will aim in increasing the number of miniature pilgrim flasks examined to confirm this preliminary hypothesis.

The data generated in this study is available upon request. 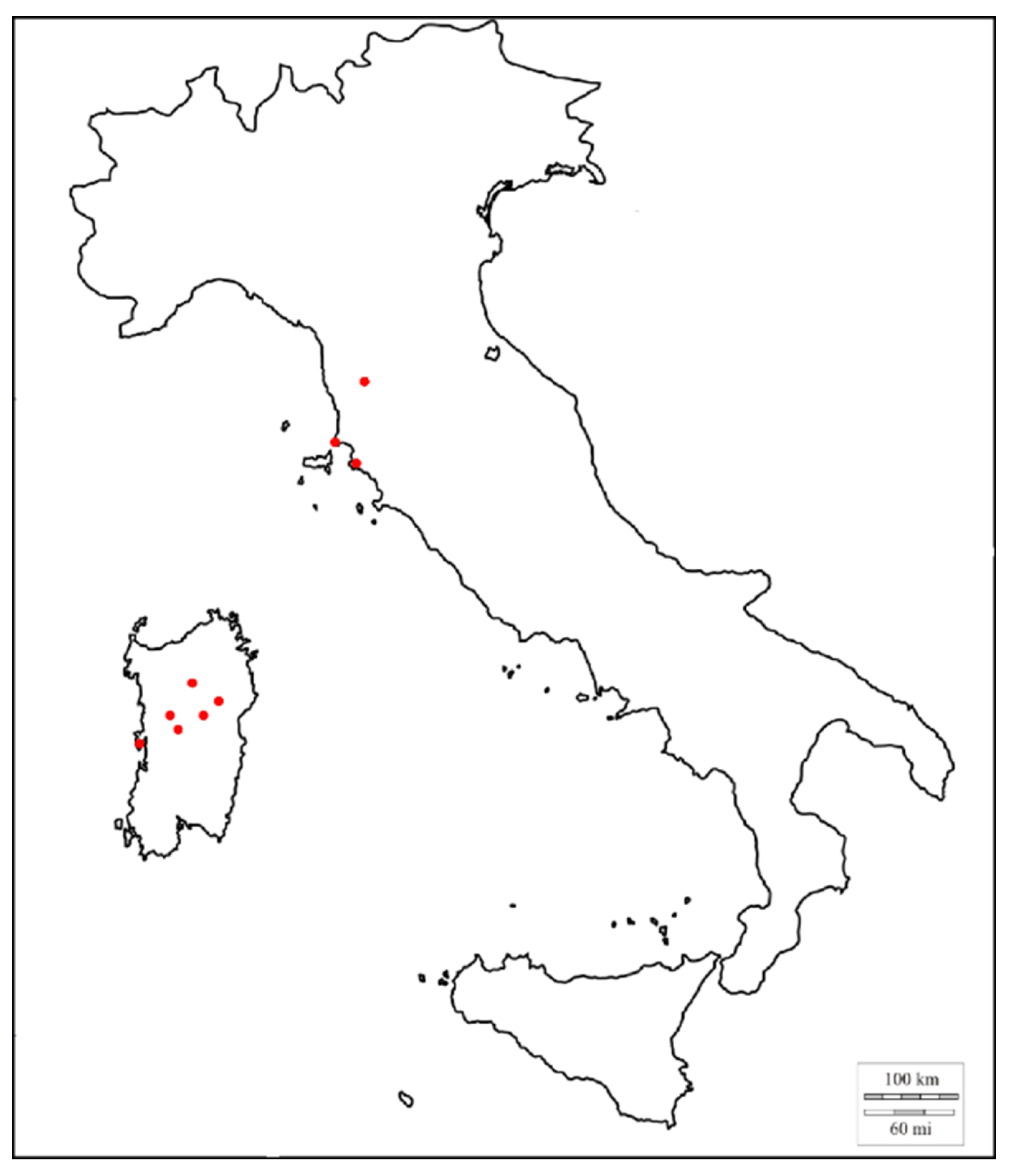 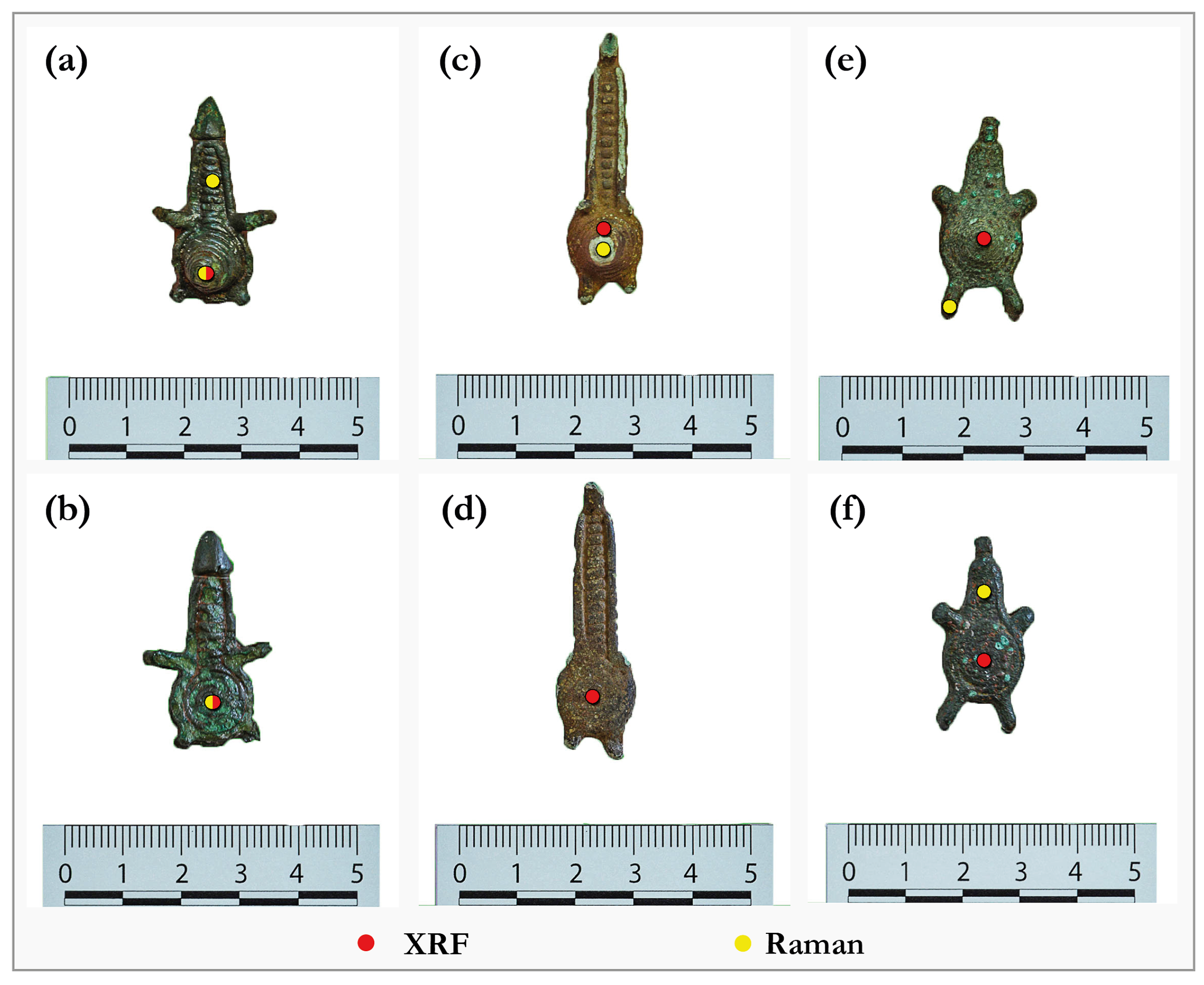