Revisiting the Relationship between Financial Wealth, Housing Wealth, and Consumption: A Panel Analysis for the U.S.
Previous Article in Special Issue

When supplying energy into the electricity grid, it is important to know the expected output from solar energy systems. While a point forecast of the expected output is valuable, it is only the expected value, whereas a probabilistic forecast gives a range of the most likely values of the output. A probabilistic forecast provides information about all expected outputs and allows one to asses a wide range of uncertainties and that can in turn improve decision making. A probabilistic forecast can be thought of as the error bounds of the forecast. These error bounds are also known as prediction intervals.
Probabilistic forecasting is becoming more prevalent in the renewable energy forecasting literature. Note also that one of the priorities of the International Energy Agency Task 16 on “Solar resource for high penetration and large-scale applications” is developing the best methods for probabilistic forecasting of solar radiation. For a detailed literature review on probabilistic forecasting, please refer to our earlier work [1] on probabilistic forecasting of solar irradiation. Since then, several studies have been reported in the literature. Please note that a glossary describing the symbols used is given at the end of the paper in Section 6.
Lauret et al. [2] develop three probabilistic forecasts based on nonparametric methods of linear quantile regression. Scolari et al. [3] develop ultra-short-term (from 500-millisecond to 5-min) probabilistic forecasts of global horizontal irradiance. They use a nonparametric method based on k-means clustering of historical data according to certain influential variables; average clear-sky index and clear-sky index variability. Chu and Coimbra [4] develop very short-term (5-, 10-, 15- and 20-min) probabilistic forecasts of direct normal irradiance (DNI) based on a k-nearest neighbor ensemble (kNNEn) method. An assessment of machine learning techniques for intra-hour point and probabilistic forecasting is performed by [5].
David et al. [6] develop probabilistic forecasts on time scales of ten minutes to six hours of global horizontal irradiance. They use a clear-sky model to model the annual and diurnal cycles and a combination of the auto regressive moving average (ARMA) model to describe the serial correlation and the parametric generalized auto regressive conditional heteroscedasticity (GARCH) model to model the volatility.
Trapero [7] develops one-step-ahead hourly uncertainty forecasts of global horizontal irradiation (GHI) using kernel density estimates, GARCH and Single Exponential Smoothing methods, and a combination of the before mentioned methods. They find that the combination of methods is a good compromise between coverage and interval width.
Voyant et al. [8] uses two persistent and four machine learning point forecasting methods for one-step-ahead hourly GHI. The probabilistic forecast (one to six hours) method is based on the bootstrap sampling of a training set using the k-fold method, together with the cumulative distribution function (CDF).
It is important to note that most of the studies in the literature use a clear-sky model to encapsulate the climatology (de-trending) of GHI. We instead use Fourier series to model the climatology.
In this paper, we develop a new probabilistic forecasting method. Our new probabilistic forecasting method extends our previous bootstrap method [1,9] to a case of an exponentially decaying heteroscedastic model for tracking dynamics in solar radiance. For the remainder of this paper we refer to our old method as unconditional and our new method as conditional. The unconditional method catered for the global systematic variation in variance of solar radiation, whereas the conditional method also caters for the local variation in variance—in other words the conditional heteroscedastic nature. One could say that the unconditional picks up the climate variation in variance, while the conditional picks up the variation because of the weather. The performance of the unconditional method was very good, except in one aspect. Since the prediction interval construction was based solely on bootstrapping errors for the particular time of day and year, the present weather conditions were not taken into account. Thus, on a systematically clear day, the prediction intervals, although they exhibited the correct coverage criteria, they were much wider, less sharp, than one would hope. The conditional method presented here takes into account the conditions on the day as well as the time of day and year, and thus the intervals are sharper. Please note that even though the analysis is performed on hourly data similar procedures can be used for shorter time scales. In particular, they will be adapted to be used for forecasting output on a five-minute time scale for solar farms in Australia, under an Australian Renewable Energy Agency (ARENA) funded grant.
Boland and Soubdhan [10] use Fourier series for the climate variation, and then an autoregressive model to forecast the residual series after removal of the seasonal component. In that paper prediction intervals are formed for the forecasts at the three sites studied using an ARCH model technique. However, they do not take into account the interplay of systematic and conditional changes in variance that is integral to the treatment here.
This paper is organized as follows. A description of the data is given in Section 2. Section 3 describes both the point forecasting model and its performance. In Section 4 we describe our conditional probabilistic forecasting method, and report on its performance and compare the results to the literature in Section 5. The paper is concluded with a discussion of our findings and ideas for future work in Section 6.

Observed hourly GHI was obtained from the Australian Bureau of Meteorology [11] for three locations: Adelaide, Darwin, and Mildura. The three locations have three different climate types. We chose different climate types to determine how sensitive our methods might be to location.
Each data set consists of ten years of hourly GHI values with units of watt-hours per square meter, Wh·m. The first eight years were used for generating the point forecasting and probabilistic forecasting models (in-sample). The last two years were used for out-of-sample testing. Observations on 29 February in leap years were omitted. The Adelaide data set contains 1803 missing hourly GHI values and these were omitted.
Table 1 provides a summary of the climate types for the three locations. A map showing the three locations is shown in Figure 1.

We begin with a description of our one-step-ahead point forecasting model. We use Fourier analysis to account for the seasonality and an autoregressive model to account for the serial correlation. Our hourly GHI model for Mildura is given by: where is a seasonal component, is an autoregressive component, and is a noise such that , if and . That is, may be heteroscedastic. The autoregressive component is a linear combination of previous time steps.
We use power spectrum analysis to identify the significant frequencies in the Fourier component . We use 11 significant frequencies at cycles 1, 2, 364, 365, 366, 729, 730, 731, 1094, 1095 and 1096 cycles per year. These correspond to once-a-year (1) and twice-a-year (2) cycles, once-a-day (365), twice-a-day (730) and three-times-a-day cycles (1095), as well as the beat frequencies for the once-a-day (364, 366), twice-a-day (739, 731) and three-times-a-day cycles (1094, 1096). As [12] points out, the beat frequencies, also known as sidebands, are used to modulate the amplitude to suit the time of year. For our three locations, explains between 80–85% of the total variance.
We then use an autoregressive model of order 3, AR(3), to model the serial structure in the residuals after has been removed. The final step was to zero any night time values; solar altitudes less than zero degrees.
Similar point forecasting models were also developed for Adelaide and Darwin but are not shown here. For a detailed description of our point forecasting method, the reader is encouraged to read our previous paper [1].

Table 2 shows the out-of-sample normalized root means square error (NRMSE), mean bias error (MBE) and mean absolute error (MAE) for the point forecasting method for Adelaide, Darwin, and Mildura. The NRMSE is normalized using the mean daytime value. With an adequately performing one-step-ahead point forecast, the next step is to develop a probabilistic forecast. It is not our intent here to compare our point forecasting model to a smart persistence model, as is commonly done in the literature, as we did this in our previous paper [1] and showed our method’s superior performance. In addition, our proposed methodology for generating a probabilistic forecast can be extended to other point forecasting methods, such as those proposed in, for example, [12,13,14] and the references therein.

5.5. Results in the Literature

In this section, we compare our method to similar methods in the literature. Where applicable, we believe our conditional probabilistic forecasting method performs well compared to other methods.
Unfortunately, it is not clear what the nominal prediction intervals are in [8]. Therefore, we do not make a comparison.
David et al. [6] do not report on prediction interval widths but do provide reliability diagrams that shows the PICP. However, as they acknowledge, the coverage of their probabilistic forecasts do not match the nominal prediction intervals for all coverage probabilities—with deviations away from the ideal line.
Pedro et al. [5] reports on the PICP and PINAW metrics for time scales up to thirty minutes. The results from their reliability diagrams are mixed with deviations from the ideal line for some methods. They provide PINAW results for 80% prediction intervals with the best performing method scoring 9.9%. Our best performing location, Mildura, scored 16.4%. It is important to note that our time scale is hourly, not thirty minutes, so a higher percentage is expected.
Trapero [7] have well calibrated prediction intervals for their combined method with the PICPs matching the nominal coverages. To measure how sharp their probabilistic forecast is, they do not use the PINAW metric. Instead they use the average interval width metric which is calculated by dividing the interval range by its midpoint. For their combined method for a nominal coverage of 95%, the average width is 1.32. For a nominal coverage of 95% for Mildura, we used their average interval width metric and our conditional method scored 0.79.

In the paper we have described our new conditional probabilistic forecasting method which extends our old unconditional method to a case where we cater for the heteroscedastic nature of the series by constructing an exponentially weighted smoothing average model for forecasting the variance. The conditional method caters for both the global systematic variation in variance of solar radiation and the local variation in variance. Results show that the conditional method performs better than the unconditional method for locations exhibiting more clear-sky days, while results are mixed for the location with less clear-sky days. It could be that this would be improved if the point forecast model were to be developed separately for the different seasons for locations such as Darwin with pronounced differences in cloud cover in different seasons. Results also show our method compares well to the literature.
Future work will examine if there is an optimal way of combining the two probabilistic forecasting methods, perhaps using gradient boosting. We would also like to incorporate a numerical weather prediction (NWP) forecast into our point forecast to see if this improves performance of both the point forecast as well as the probabilistic forecast. 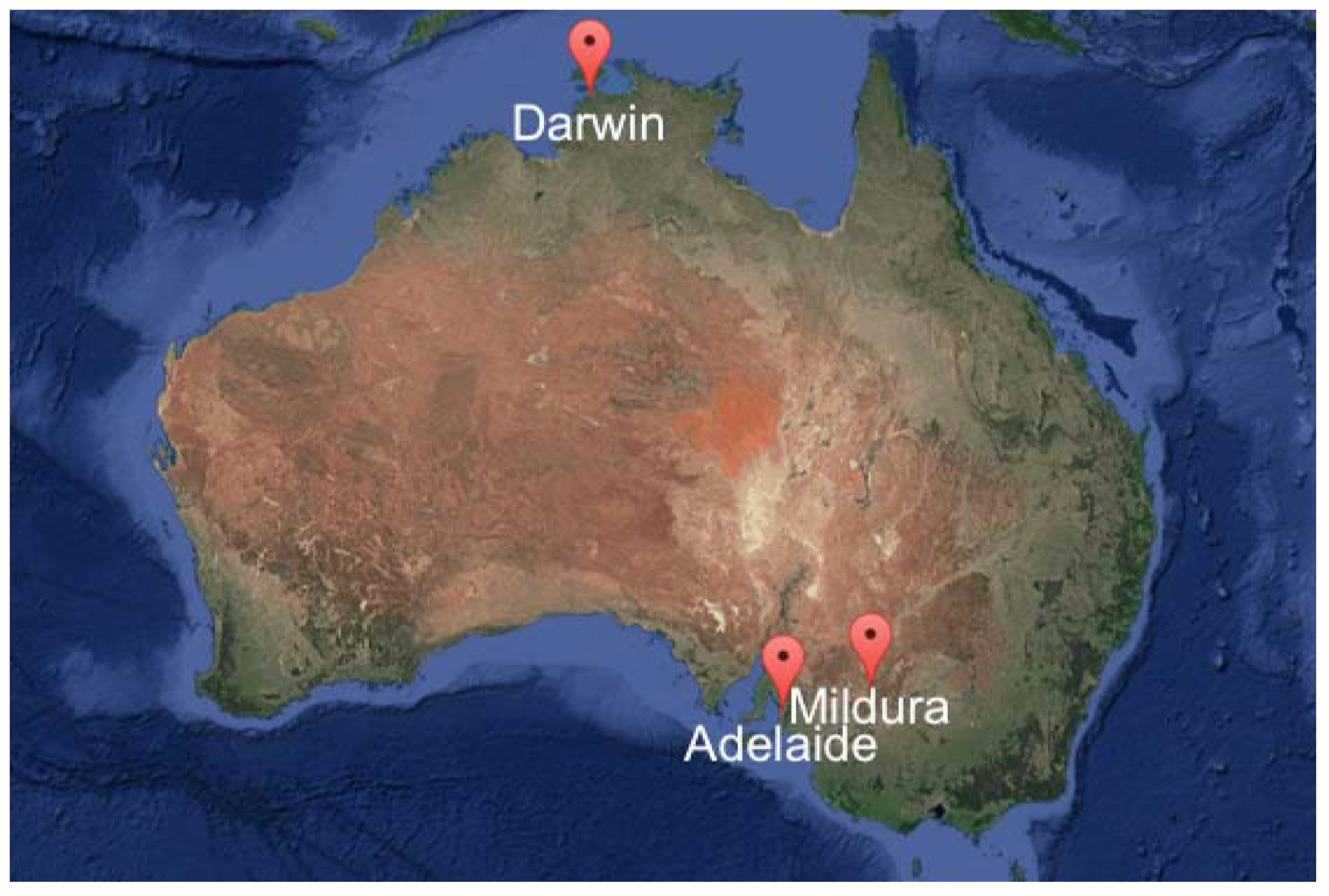 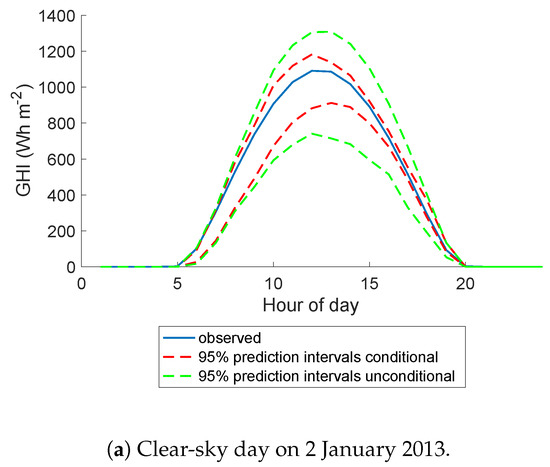 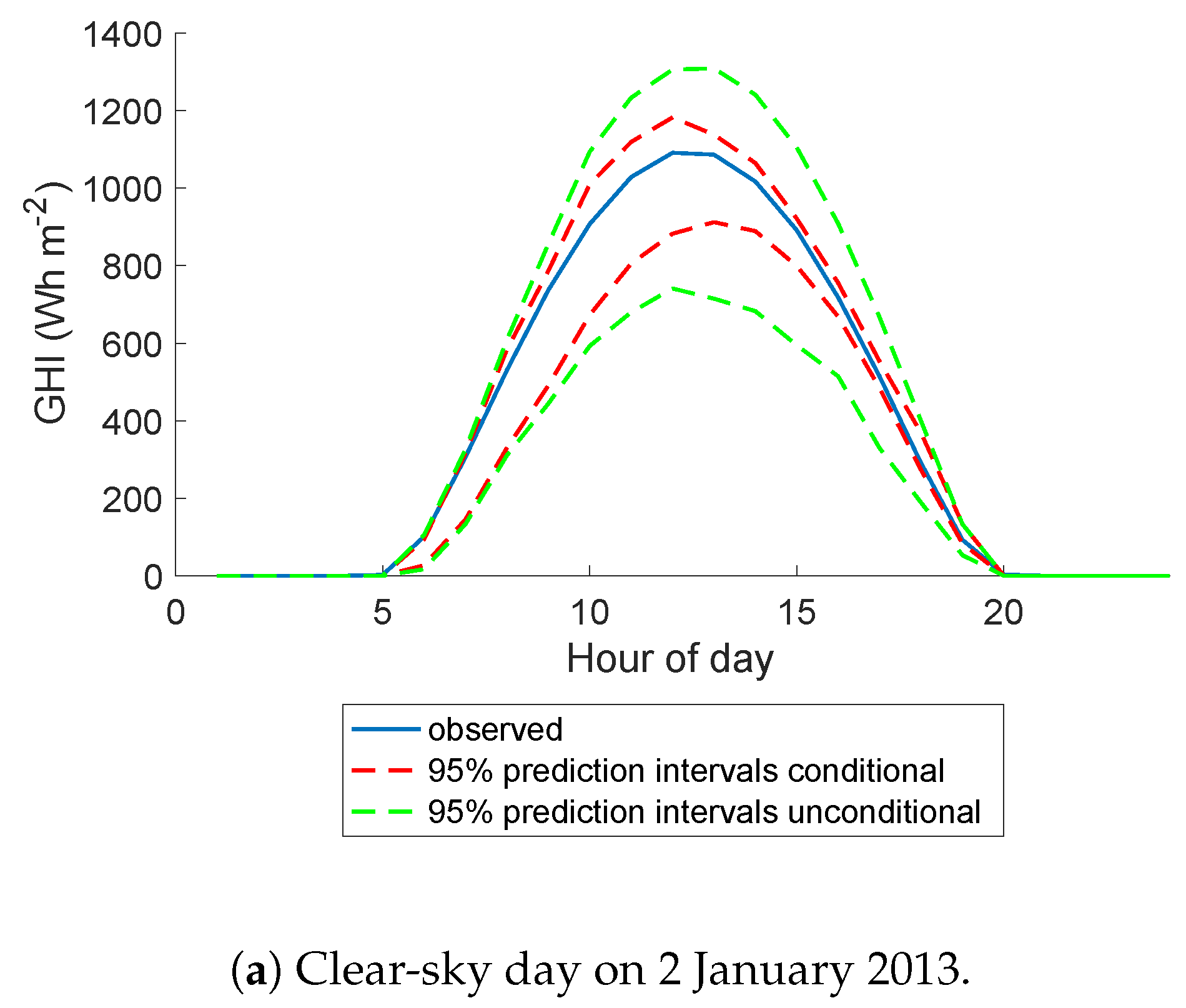 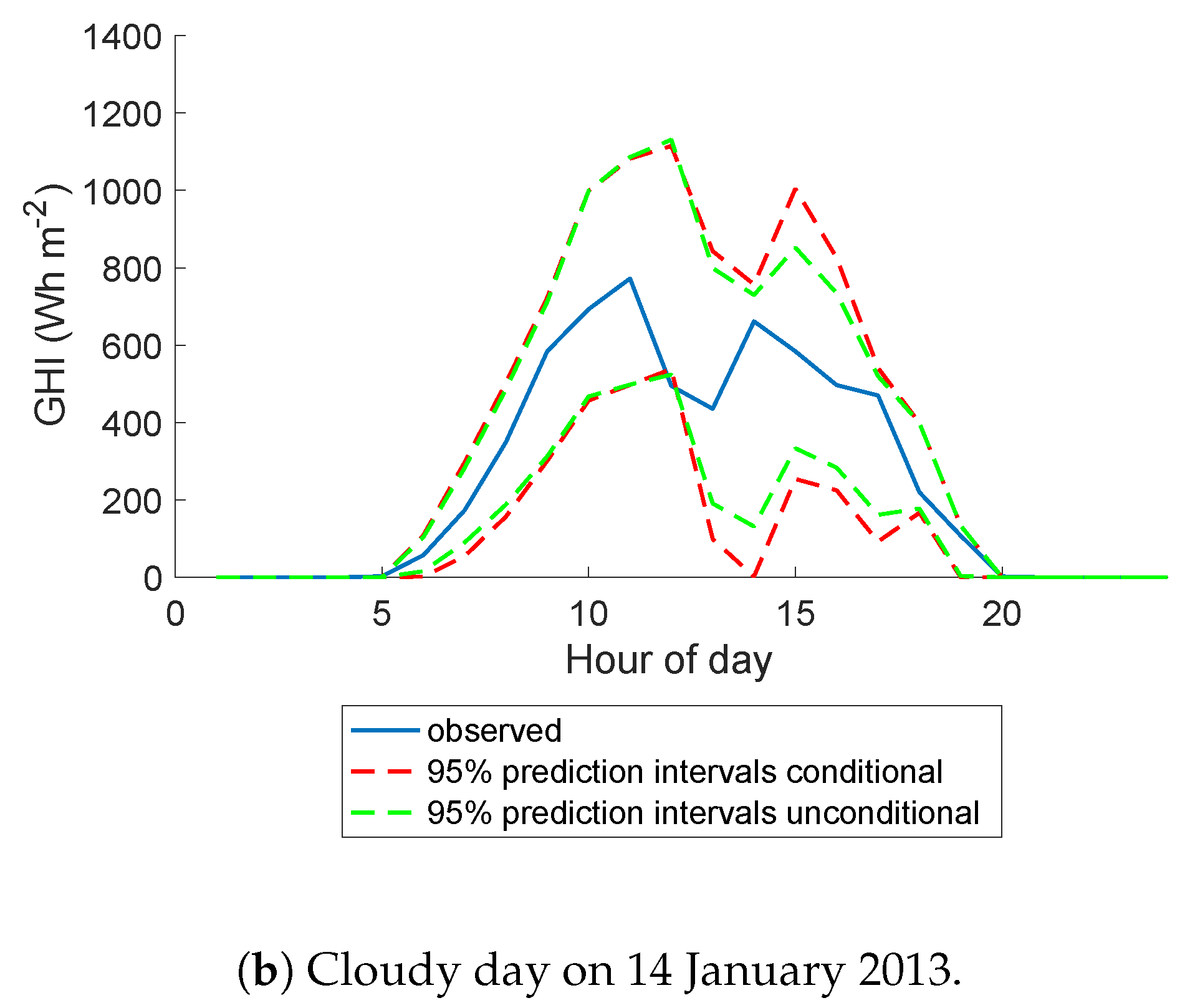 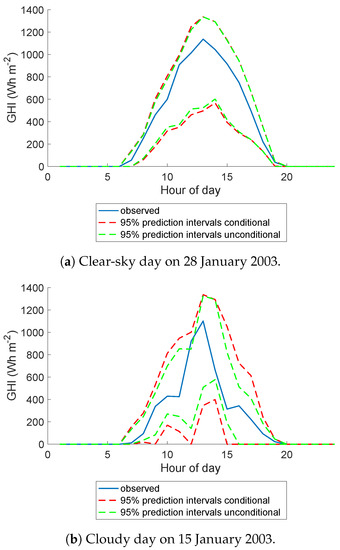 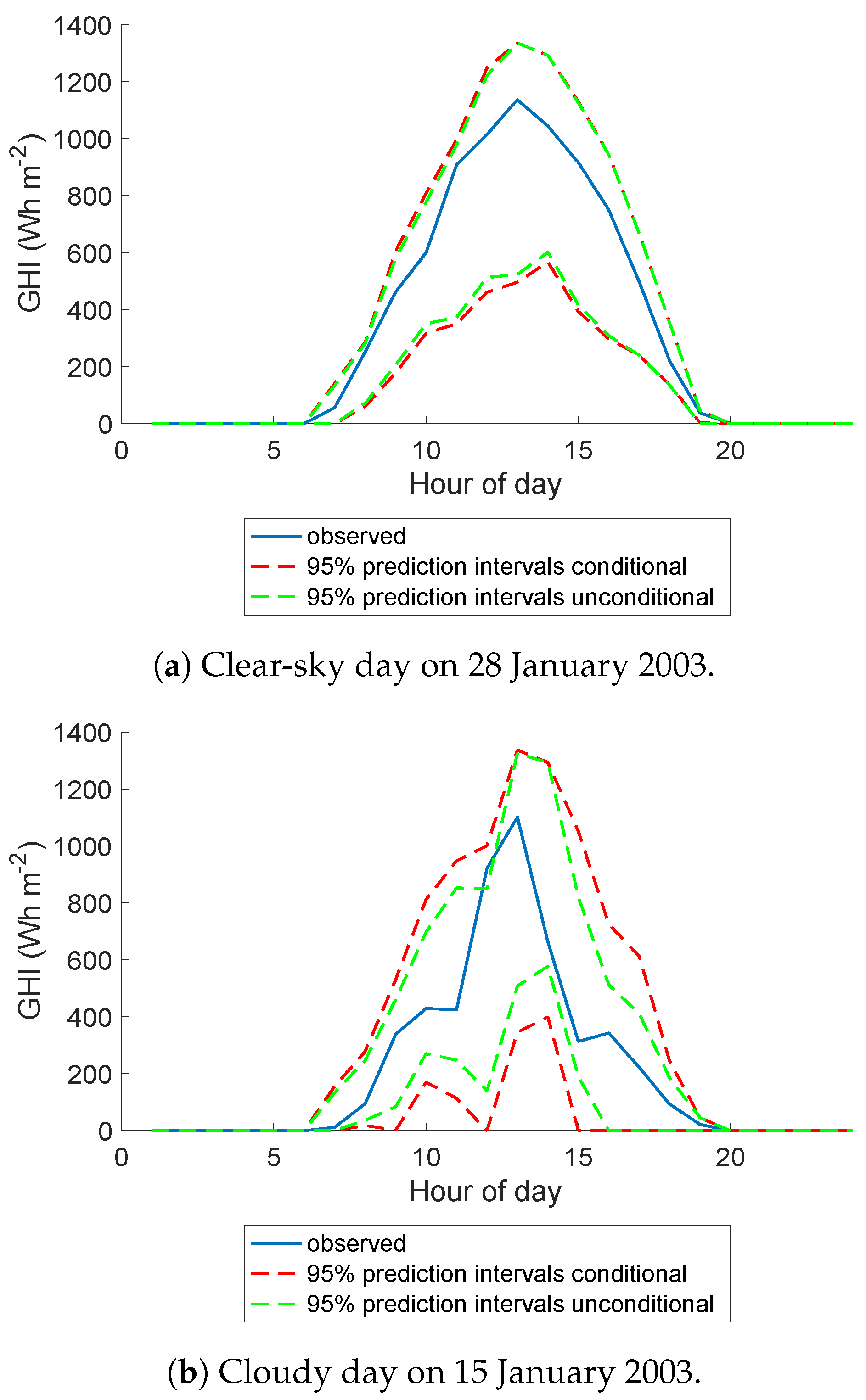 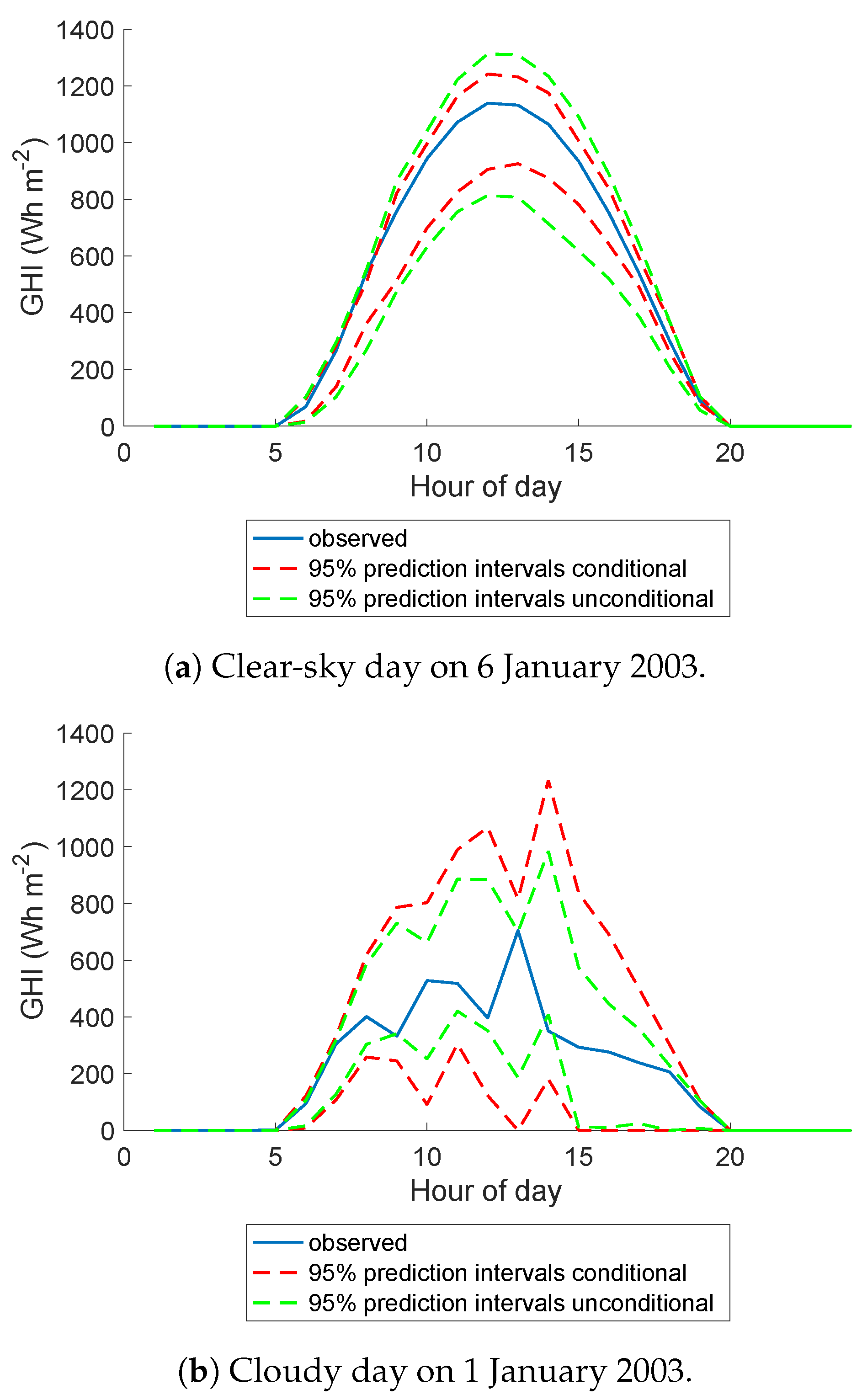 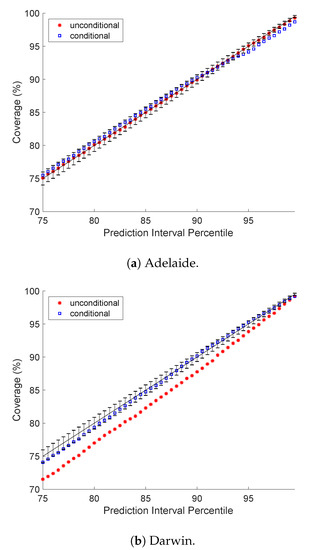 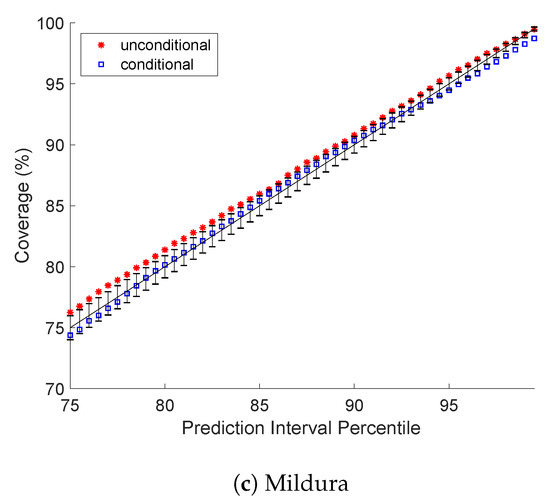 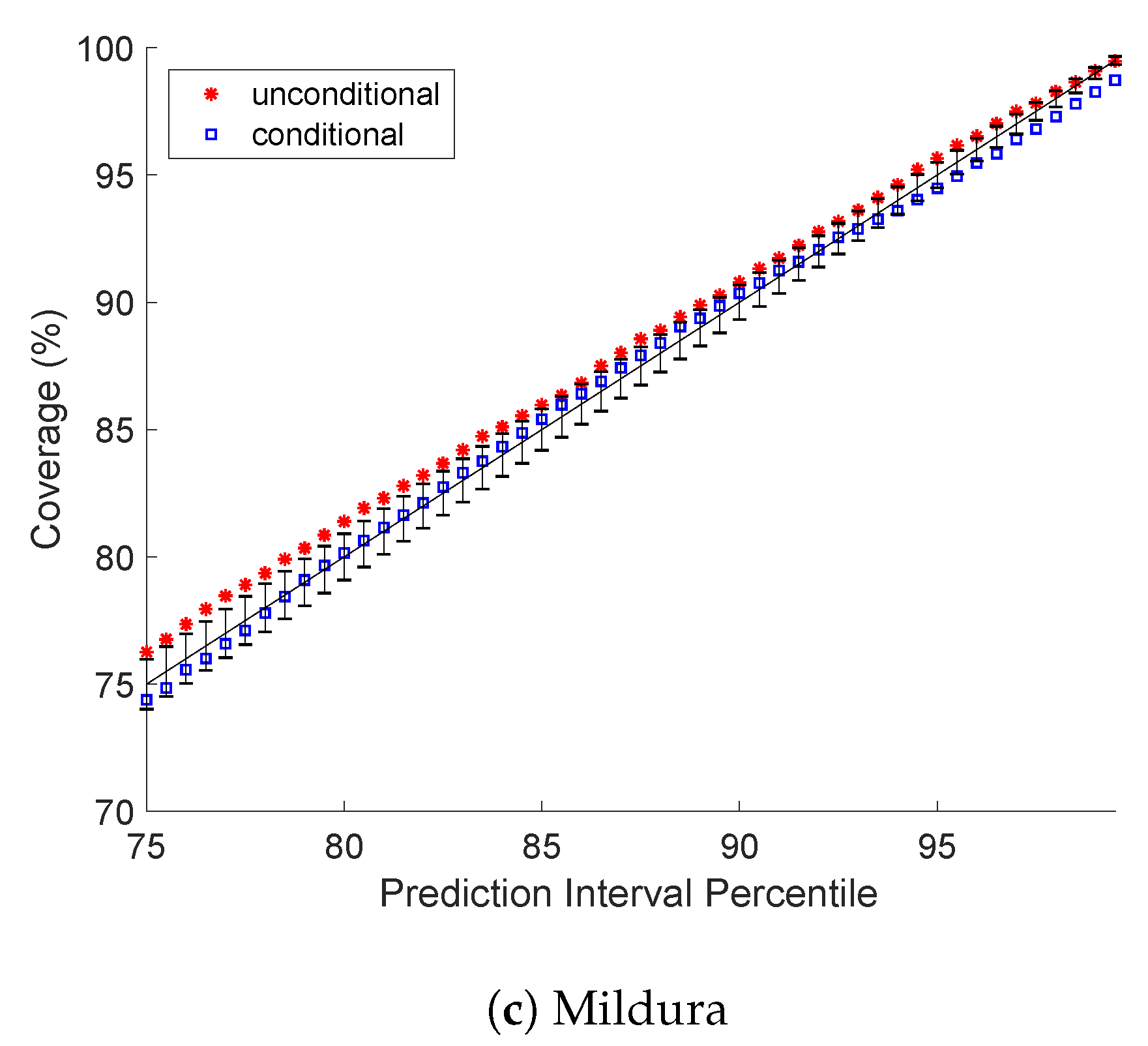 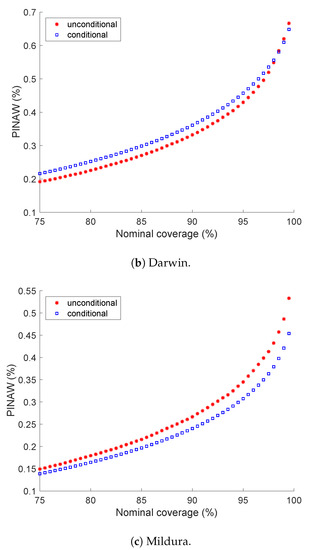 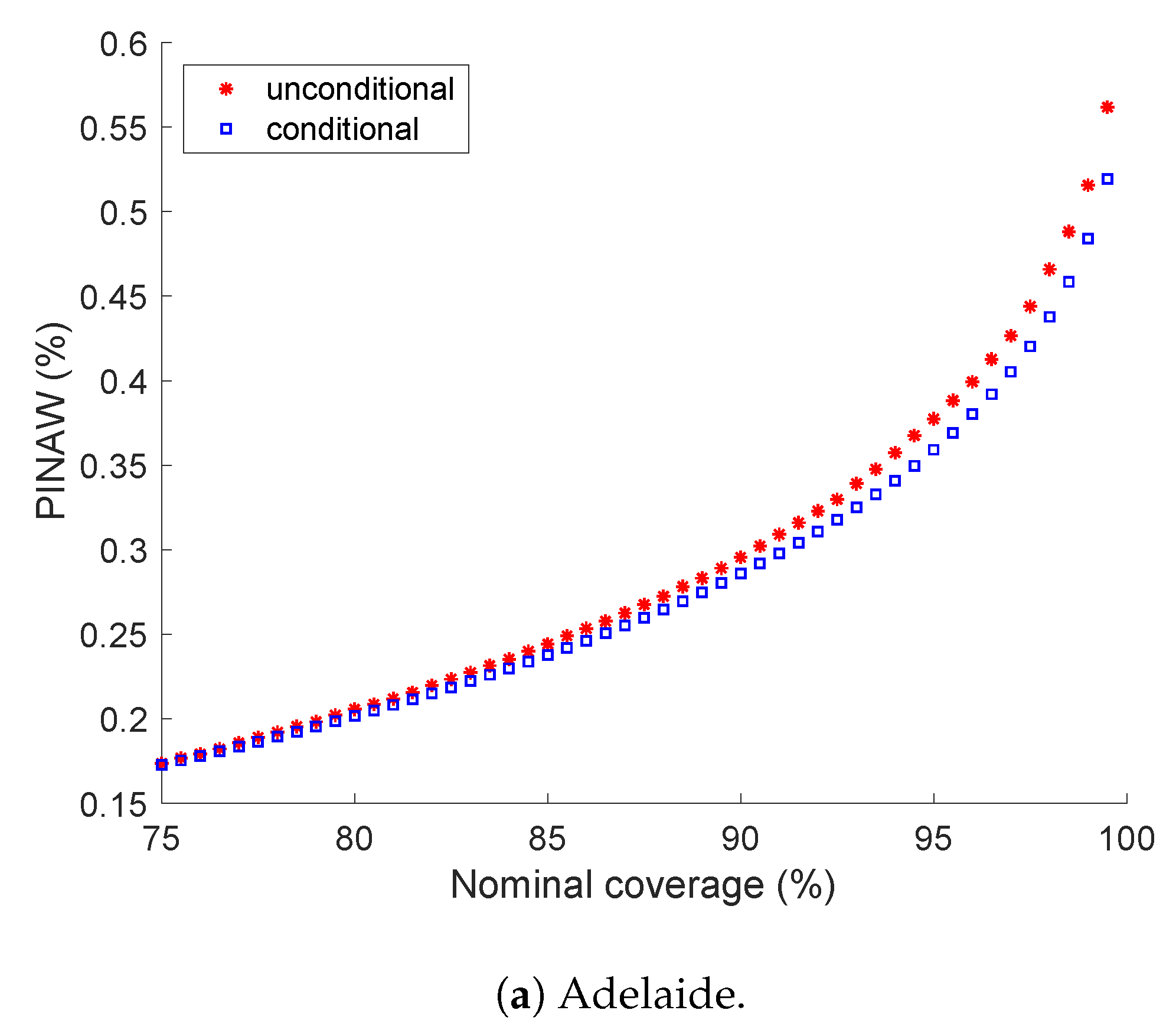 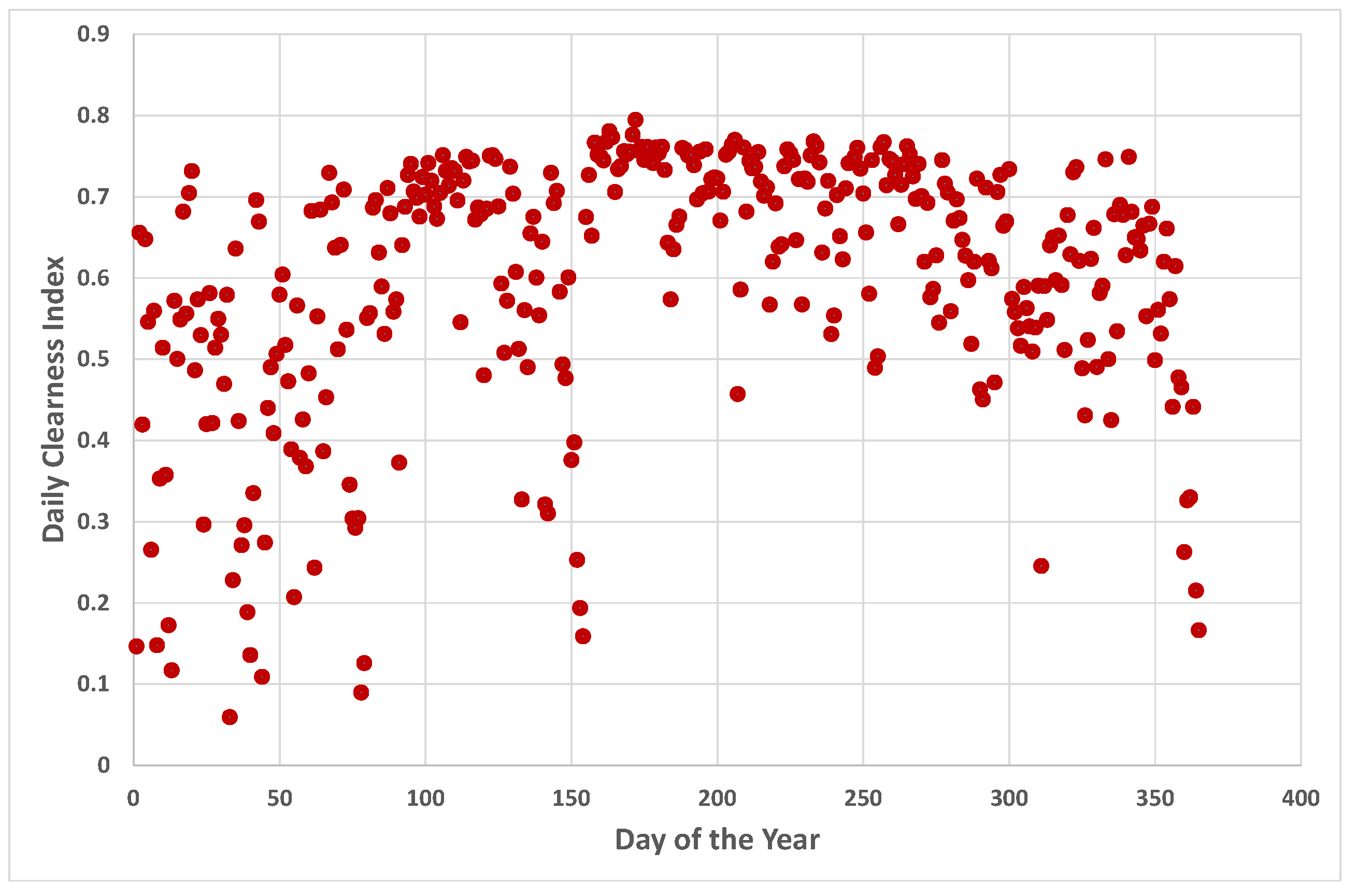 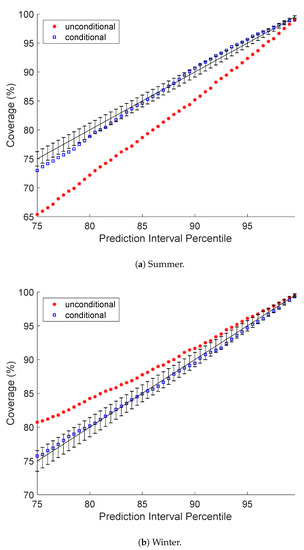