Revisiting the Relationship between Financial Wealth, Housing Wealth, and Consumption: A Panel Analysis for the U.S.

Based on the seminal paper of Case, Quigley, and Shiller (2013), we investigated the effects of financial and housing wealth on consumption. Using quarterly data from 1975 to 2016 for all states of the U.S. economy, and a different methodology in measuring wealth, we report relatively greater financial effects than housing effects on consumption. Specifically, in our basic utilized model, the calculated elasticity for financial wealth was 0.060, while for housing it was 0.045. The results were not in agreement with the ones obtained by Case, Quigley, and Shiller. In an attempt to investigate this disparity, we proceeded by incorporating the introduction of the Tax Reform Act in 1986, which increased incentives for owner-occupied housing investments. Finally, due to distributional factors at work, and taking into account the pronounced uneven distribution of wealth, we investigated the effects of wealth for eight states that included the metropolitan areas comprising the well-known Case–Shiller 10 City Composite Index. Now the housing effect on consumption was much stronger and larger than the financial effect. Additionally, we forecasted the consumption changes at the time of high rise and large drops in house prices for these states. Forecasts showed a recession from the fall of Lehman Brothers until the fourth quarter of 2011. These forecasts were not verified. Probably, the new techniques used by policies played an important role. We also found that extreme behaviors cannot be predicted. View Full-Text
Keywords: consumption; financial wealth; housing wealth; wealth effects consumption; financial wealth; housing wealth; wealth effects
►▼ Show Figures 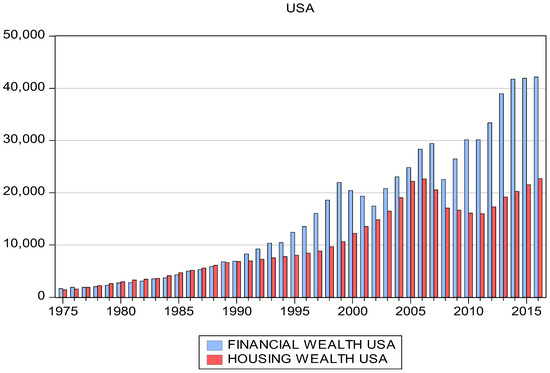