Synthesis and Properties of SBA-15 Modified with Non-Noble Metals

Anomalous Interfacial Structuring of a Non-Halogenated Ionic Liquid: Effect of Substrate and Temperature

We investigate the interfacial properties of the non-halogenated ionic liquid (IL), trihexyl(tetradecyl)phosphonium bis(mandelato)borate, [P6,6,6,14][BMB], in proximity to solid surfaces, by means of surface force measurement. The system consists of sharp atomic force microscopy (AFM) tips interacting with solid surfaces of mica, silica, and gold. We find that the force response has a monotonic form, from which a characteristic steric decay length can be extracted. The decay length is comparable with the size of the ions, suggesting that a layer is formed on the surface, but that it is diffuse. The long alkyl chains of the cation, the large size of the anion, as well as crowding of the cations at the surface of negatively charged mica, are all factors which are likely to oppose the interfacial stratification which has, hitherto, been considered a characteristic of ionic liquids. The variation in the decay length also reveals differences in the layer composition at different surfaces, which can be related to their surface charge. This, in turn, allows the conclusion that silica has a low surface charge in this aprotic ionic liquid. Furthermore, the effect of temperature has been investigated. Elevating the temperature to 40 °C causes negligible changes in the interaction. At 80 °C and 120 °C, we observe a layering artefact which precludes further analysis, and we present the underlying instrumental origin of this rather universal artefact. View Full-Text
Keywords: non-halogenated ionic liquids; interfacial layers; atomic force microscopy; surface forces; surface charge; surface interactions; thermal instability non-halogenated ionic liquids; interfacial layers; atomic force microscopy; surface forces; surface charge; surface interactions; thermal instability
►▼ Show Figures 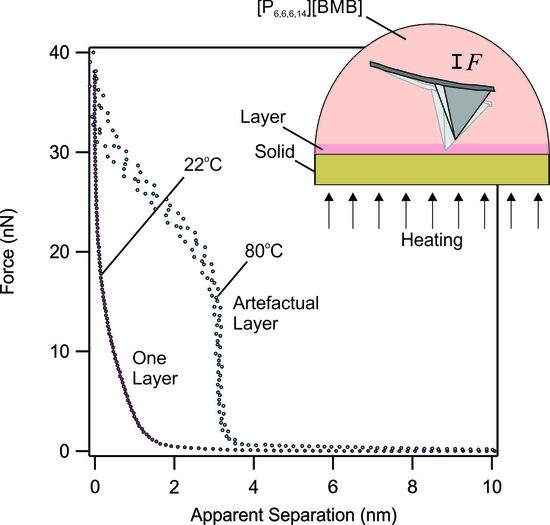