The Carbon fiber reinforced polymer (CFRP) prepreg was purchased from Hexcel. The carbon fiber is a taffetas fabric (0/90°, 300 g/m2) with 34% in weight in a M79 epoxy resin. Multiwall carbon nanotubes (NC-7000TM) were kindly provided by Nanocyl® (Sambreville, Belgium). This grade corresponds to MWCNT with an average diameter of 10 nm and a mean length comprised between 100 and 1000 nm. Epolam 2020 epoxy resin & amine hardener were purchased from Axson Technologies (Saint-Ouen, France), glass fiber was purchased from Composites Distribution® (Orvault, France) and chloroform (99%) was purchased from Sigma-Aldrich (Saint-Quentin, France).

Calculated amounts of CNT and epoxy resin were homogenized in chloroform by ultra-sonication with a Branson 3510 sonicator for 90 min at 25 °C, and further degassed for 5 min. After dispersion of the CNTs in the epoxy resin, an amine hardener was added and the mixture was sonicated for 30 min. The obtained mixing contains 3% by weight of CNT in the epoxy. 7 mm × 3 mm thin-film sensors were obtained by the technique of spraying via layer-by-layer (sLbL) deposition and can be seen in Figure 2b. The electrical connections were made with silver-based ink. The solutions were sprayed with our homemade device onto the supporting glass fiber/epoxy film allowing a precise control of nozzle scanning speed (10 cm s−1), solution flow rate (50 mm·sec−1), stream pressure (0.20 MPa), and target to nozzle distance (8 cm). The QRS was then insulated with a layer of glass fiber/epoxy substrate. The QRS are embedded into the CFRP during the stacking sequence (16 plies). 4 locations are selected and their coordinates are related to the position of loading pin (X; Z), as illustrated in Figure 2a,c. A pair of QRSs aligned on the centreline of the loading pin (X0), under the first ply (X0; Z0) and in the mid-thickness of the CFRP (X0; Z-1/2), respectively. A second pair is located at the same depths, but offset by a quarter of the length of the sample, (X1/4; Z0) and (X1/4; Z-1/2) respectively. Curing is carried out by a 6 h heat treatment at 80 °C ensuring complete crosslinking and the resulting CFRP sample dimensions are 400 × 50 × 3.2 mm3.

An Instron 5566A servo-hydraulic was used to perform static three-point bending experiments, according to the standard NF EN ISO 14125. An Instron Electropuls E10000 was used to perform dynamic three-point bending experiments with the same apparatus as for the static tests.
The fracture profile was obtained by Scanning Electron Microscopy (SEM) using a Jeol series model (JSM-6031F) (JEOL Europe SAS, Croissy Sur Seine, France).
In situ electrical measurements were carried out by an HBM quantum 840 device with a direct current of 1 V applied to the QRS.

3.1. Mechanical Properties of the Sample with and without Embedded QRS

In order to study the effect of QRS on the mechanical performance of the CFRP sample, three-point static bending experiments were performed with and without QRS embedded in the sample core, as presented in Figure 3a. Both cases show similar behavior with first a linear increase in stress with strain up to 0.5% in the elastic range, followed by a slight reduction in the stress increase due to the initiation cracks at the 90° fibers interfaces and their propagation in the matrix until final failure around 1.4% [51]. The resulting mechanical properties, summarized in Table 1, are consistent with the literature data for the pristine 0/90° carbon fiber epoxy composite [52,53]. In addition, the introduction of QRS modifies the modulus, failure stress and failure strain by 1.2, 6.0 and 5.6% respectively, which are still within the measurement uncertainty.
The regions where the rupture occurred were observed by the SEM as shown in Figure 3b,c. It was detected that the onset of failure occurred on both sides of the sample and propagated through the thickness while the delaminations are parallel to the plane of the fabric. This behavior is in line with that expected for the 0/90° composite under bending solicitation [53]. Samples with in-core QRS do not show additional delamination or failure compared to the blank samples, confirming that the mechanical properties are not affected by the introduction of QRS.

3.2. Electrical Response of QRS According to Their Location in the Specimen

The integration of an array of four Quantum Resistive Sensors was carried out for the first time to map the deformation gradient inside epoxy-carbon fiber laminate composite samples, i.e., in plane and through thickness. It was also demonstrated that the presence of QRS did not affect the mechanical behavior and properties of the CFRP samples. The gauge factor of QRS was selected around 3, being a compromise between sensitivity and noise ratio. Although higher gauge factor can be found in the literature, this sensitivity was found sufficient to monitor very small deformation in the core of the composite (0.06%). The integration inside a carbon fiber reinforced composite was made possible thanks to insulation of the sensors which opens applications in the high-performance composites area previously reserved for optical fibers. QRS were tested in both static and dynamic experiments. The robustness of sensors to follow sinusoidal solicitation at different amplitude was demonstrated.
In addition, the electrical response of QRS, conditioned by their location in the samples, allowed to determine the local deformation. A positive response was observed on the side of the composite sample submitted to tension, whereas the sensors located near the neutral axis exhibited almost no response. For the two sensors located in the same ply, a lower response was found for the QRS located away from the loading span being consistent with the beam theory. The precise spatial location of sensors could thus be used to map the deformation gradient and eventually feed a simulation software.
A part from deformation measurements, the sensors proved to be able to follow damage up to failure in static mode. In dynamic mode, a transition in behavior was observed through the variation of sensitivity of sensors over a limit of 0.8%, assumed to be the elastic limit, suggesting that sensors could be used to track damage accumulation.
Further investigations will concern the implementation of a larger number of QRS in 3D in a laminate composite part in order to map the strain field in selected area. Other modes of solicitation such as compression, shear or impact, as well as long-term experimentation (fatigue) should be studied in order to broaden the fields of application and specially to get closer to the real environmental conditions of use
This could be of great interest to monitor the health of composite in the energy and transport fields, such as turbine blades or boat foils.

The authors would like to specially thank Hervé Bellegou for developing the electrical acquisition system. 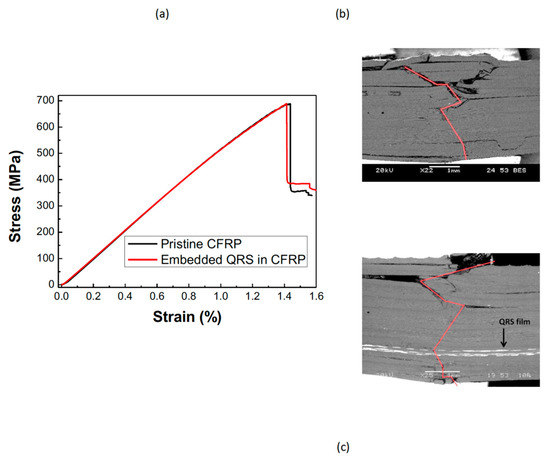 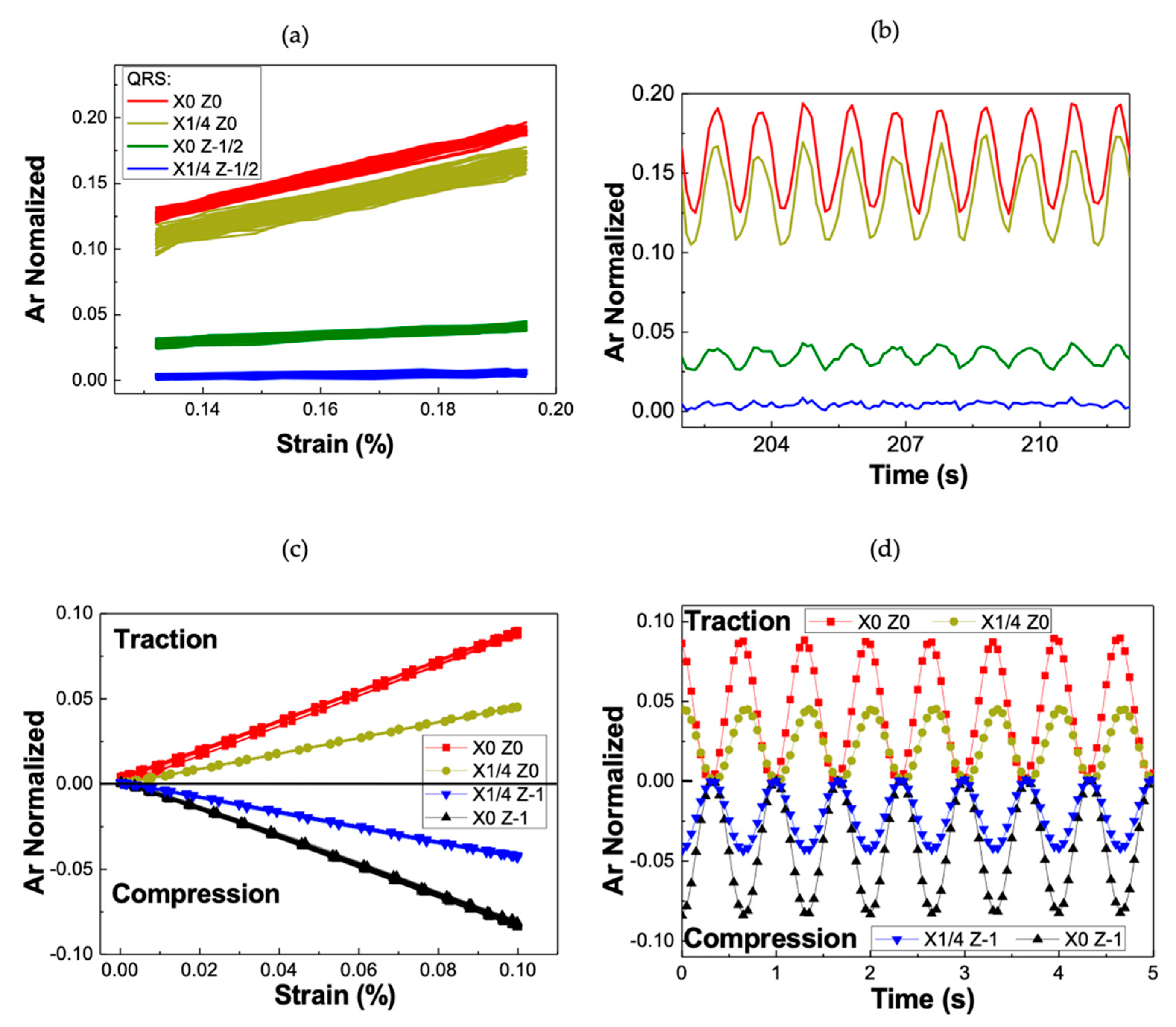 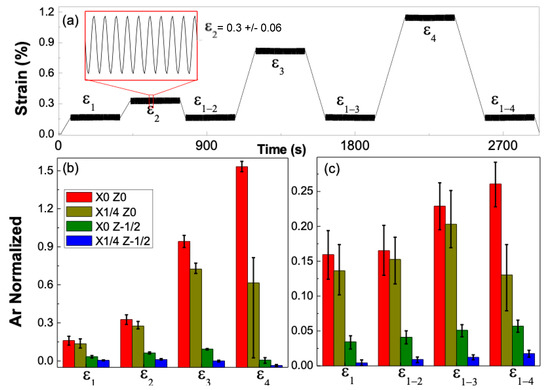 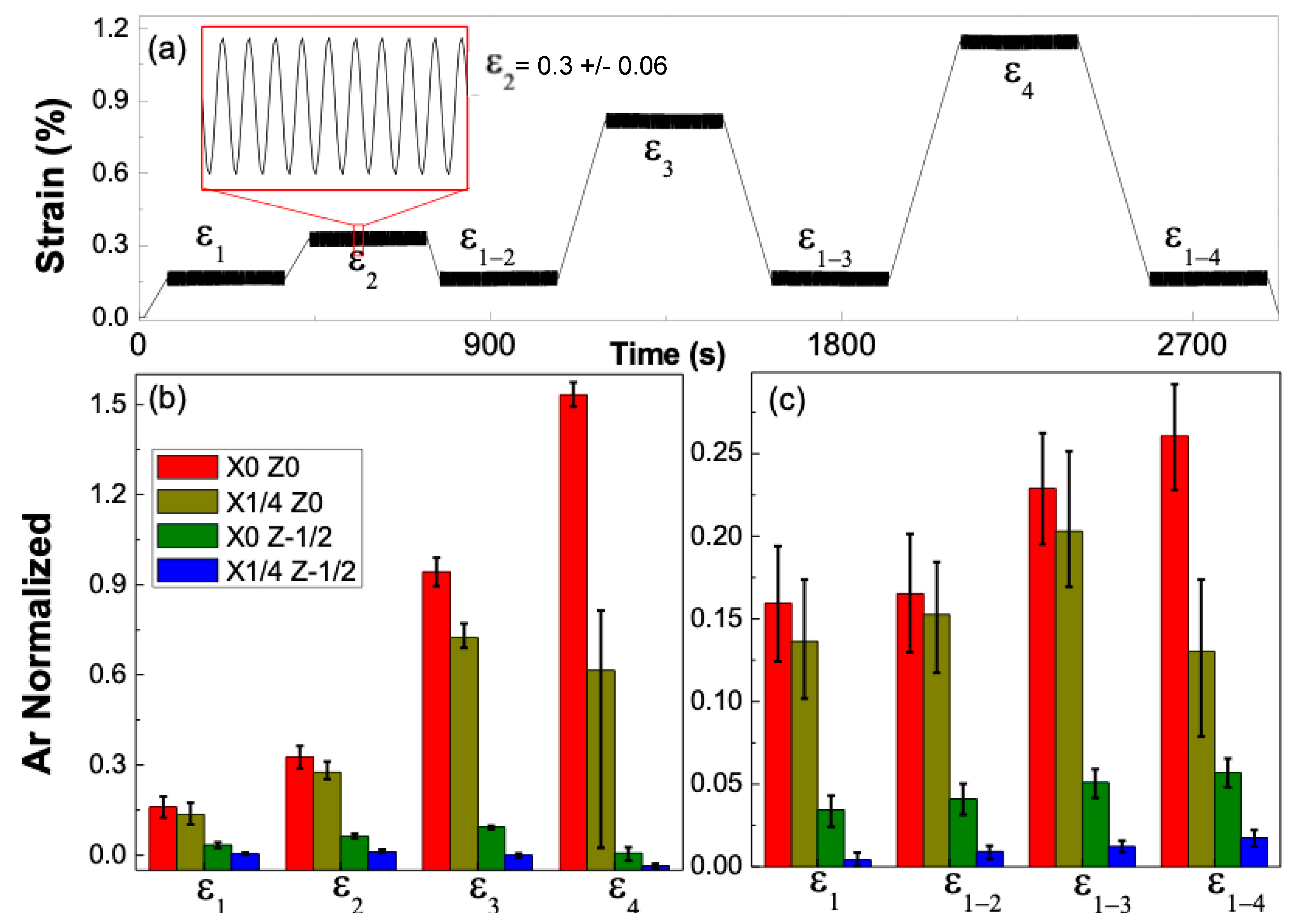 Table 2. QRS response amplitude during the cycling steps.
Table 2. QRS response amplitude during the cycling steps.
© 2021 by the authors. Licensee MDPI, Basel, Switzerland. This article is an open access article distributed under the terms and conditions of the Creative Commons Attribution (CC BY) license (http://creativecommons.org/licenses/by/4.0/).
We use cookies on our website to ensure you get the best experience. Read more about our cookies here.
Accept
We have just recently launched a new version of our website. Help us to further improve by taking part in this short 5 minute survey here. here.
Never show this again