Effect of Different Types of Block Copolymers on Morphology, Mechanical Properties, and Fracture Mechanisms of Bisphenol-F Based Epoxy System
Previous Article in Journal

The Role of Multiwalled Carbon Nanotubes in the Mechanical, Thermal, Rheological, and Electrical Properties of PP/PLA/MWCNTs Nanocomposites

A discretization of the unit sphere is necessary in order to represent the ODF numerically. Equidistant angular steps of and in a polar coordinate system can be used in principle but are rather ineffective. Because of the inadequate spatial distribution of the resulting grid points on the surface of the unit sphere using equidistant angular steps, the density of the grid points at the poles is considerably higher than at the equatorial plane. Accordingly, depending on the choice of the angular steps, both the computational effort is too high and/or the resolution at the equatorial plane is too low.
Weber et al. used an improved formulation of the unit sphere using equidistant angular steps in the pole direction and azimuth angular steps as a function of the pole angle. This results in a surface grid with almost identical surface areas [31]. However, the shapes of the surface areas are very different at the equatorial plane and the poles.
Another simple method to create a unit sphere with approximately the same density of grid points is to create an icosphere. The starting point of this method is a regular icosahedron, which is represented by the following 12 points: with . The convex hull of the point cloud is the regular icosahedron. The convex hull consists of 20 triangles of equal size. To refine the regular icosahedron to the icosphere, each of the triangles is divided into 4 smaller triangles. For this purpose, the center of each edge of the triangles is calculated and projected onto the surface of the unit sphere. This procedure can be repeated as often as needed. In this paper, the center points of the surfaces were used as grid points for the evaluation of . Therefore, the number of grid points is equal to the number of triangles. Figure 3 shows the evolution of the icosphere with increasing refinement level . A refinement level of with a total of 20,480 grid points was used entirely in this work.

The two reconstruction methods considered in this contribution are described shortly in the following section. They are, on the one hand, the spherical harmonics and, on the other hand, the method of maximum entropy.

Spherical harmonics is based on the description of fiber orientation as a Laplace series or a generalized Fourier series [2]. Each twice-integrable function can be represented on the unit sphere surface as a series representation of tensors. The series can be carried out up to order . Due to the symmetry of , only even-order tensors are used here. In the following, the equations for the reconstruction by spherical harmonics are listed, and a general derivation of the equation can be found in [2,32]. The reconstruction of the fiber orientation is determined by the sum of the moments:
The general definition for the moments is: with: and:
The integrals occurring in Equation (15) for the calculation of are replaced by the corresponding entries of the fiber orientation tensors of Equation (9).

The reconstruction methods were evaluated by comparing the results in terms of accuracy and computational effort. The basis for the investigation was provided by various test scenarios, whose creation is explained in more detail in the following section. One test scenario is an explicitly given initial ODF. This initial ODF was used to estimate the fiber orientation tensors, which were used as inputs for the reconstruction methods. With this approach, it is possible to compare the reconstructed ODFs against each other as well as against the initial ODF. Both the accuracy of the reconstruction and the numerical effort, measured by the required computing time, were compared. The spectral decomposition was repeated for the steps to . In addition, the higher-order tensors were calculated once from the initial ODF and once by closures from the lower-order tensors. Table 4 gives an overview of the reconstruction methods used and their variants. The fiber orientation tensors used for the reconstruction are indicated. In the following, the methods are only indicated by their abbreviations. ME stands for maximum entropy and SH for spherical harmonics. The number after SH indicates the maximum order used for the reconstruction. The abbreviation HY at the end stands for the use of the hybrid closure of the highest tensor, and HYHY for the consecutive use of the hybrid closure.

In addition to the synthetic benchmarks in Section 5.3, measured fiber orientation was used for comparison. These data originate exclusively from the literature.
The first set of data was taken from [7] and is shown in Figure 12 together with the reconstructions. The methods SH2 to SH8 can reconstruct the data relatively well, whereby the absolute height at the expected value is clearly underestimated, especially for SH2 and SH4. The scatter of the reconstructions is wider than the original ODF. The reason for that was already discussed for the Bingham test scenarios: The number of moments used is too low to be able to represent the peak. The reconstructions based on the hybrid closure again show a completely different behavior. Several maximum values are reconstructed, as well as a shift of the expected value. The ME method reconstructs the ODF relatively well, although with a too-low probability density around the maximum of the initial ODF and a too-wide scattering, especially at −30° and +50°.
The second set of data was taken from [43]. The fiber orientation was measured by μComputer Tomography (µCT) of injection molded samples. Subsequently, the ODF was subdivided into shell and core layers, with the shell layer used here. In this dataset, the peak at 90° is particularly interesting in respect of to what extent it can be reconstructed (see Figure 13). In the area around the expected value, the behavior is basically similar to that of the first set of data. The methods SH2 to SH8 and ME underestimate the absolute value at the expected value. With SH2 and ME, the reconstructed probability at ±50° is again too high, and the peak at 90° cannot be reconstructed. Here, only the methods SH4, SH6, and SH8 can generate something that is similar to a second peak. The reconstruction methods with hybrid closure reconstruct several maxima symmetrically to the expected value again.
The third ODF was taken out of Lenke [44]. In this case, however, the direct numerical values of the μCT-experimentally-measured ODF were not used, but a probability density function that represents the measured data in an extremely good approximation. The probability density function is described in Lenke’s work by:
The reconstruction of the methods is exactly analogous to the previous examples. Figure 14 shows the results. The methods SH2 to SH8 become better with each increasing moment to reconstruct the ODF. Here, an oscillation is very noticeable apart from the expected value. The reconstructions with hybrid closures generate several maxima again. In addition to that, it becomes evident that the ME method does not work well enough here, because the original ODF is not a Bingham distribution.

K.B., M.S. and W.K. conceived the investigation. K.B. wrote the software. K.B. and M.S. analyzed the data. K.B. did the visualization. Writing the paper was done by all three authors.

This research was supported by the German National Science Foundation (DFG) within the Project STO 910/13-1. 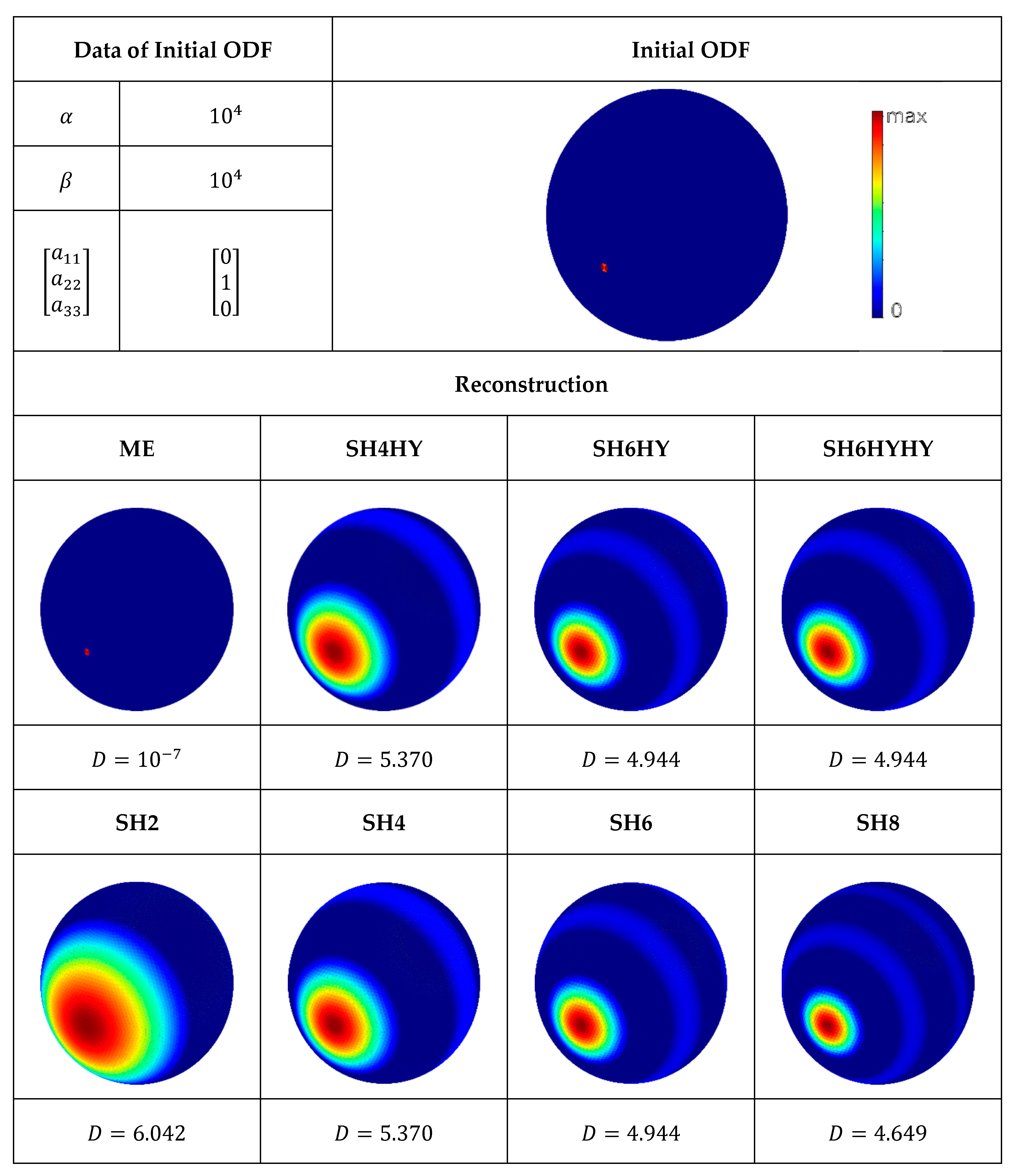 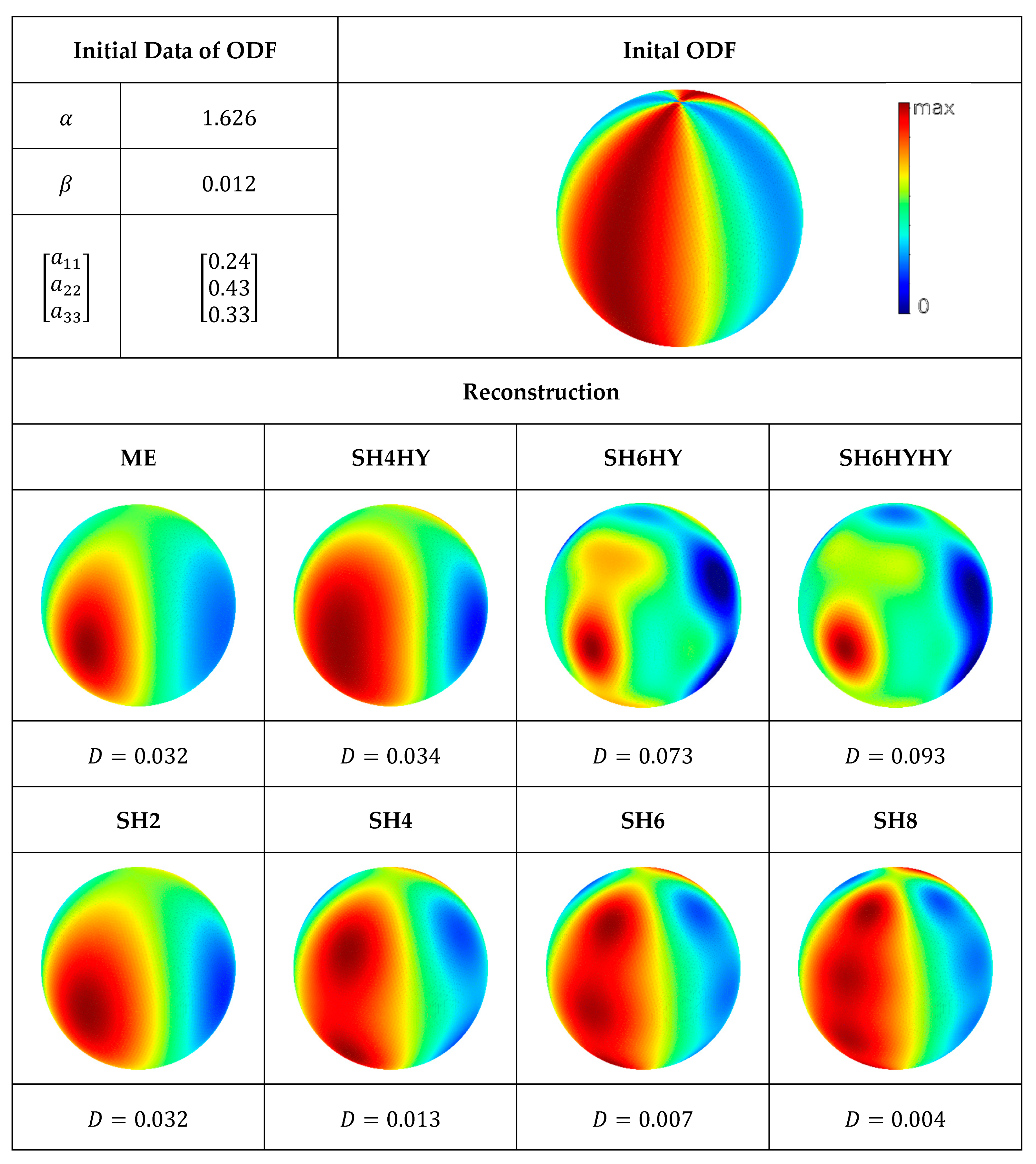 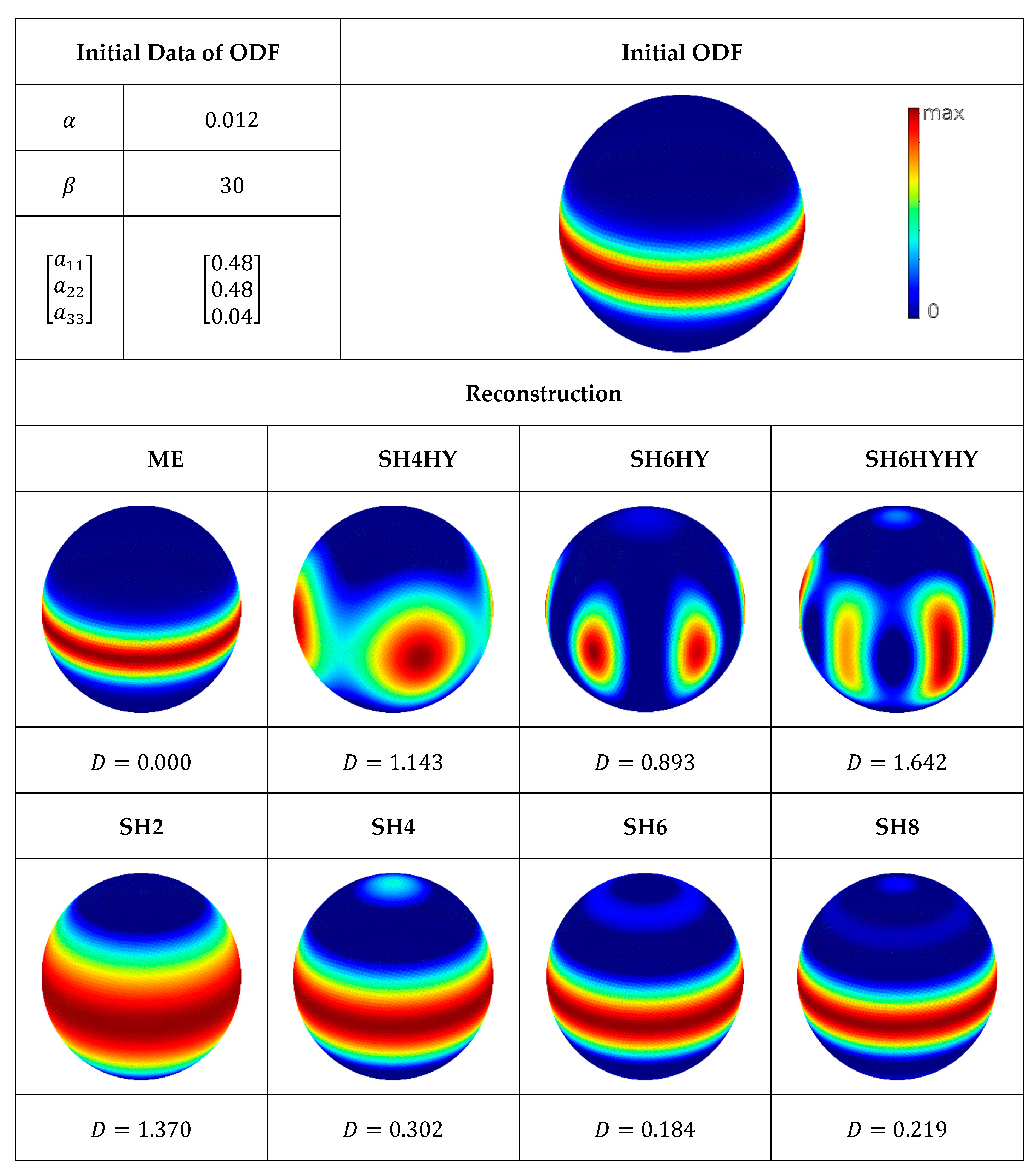 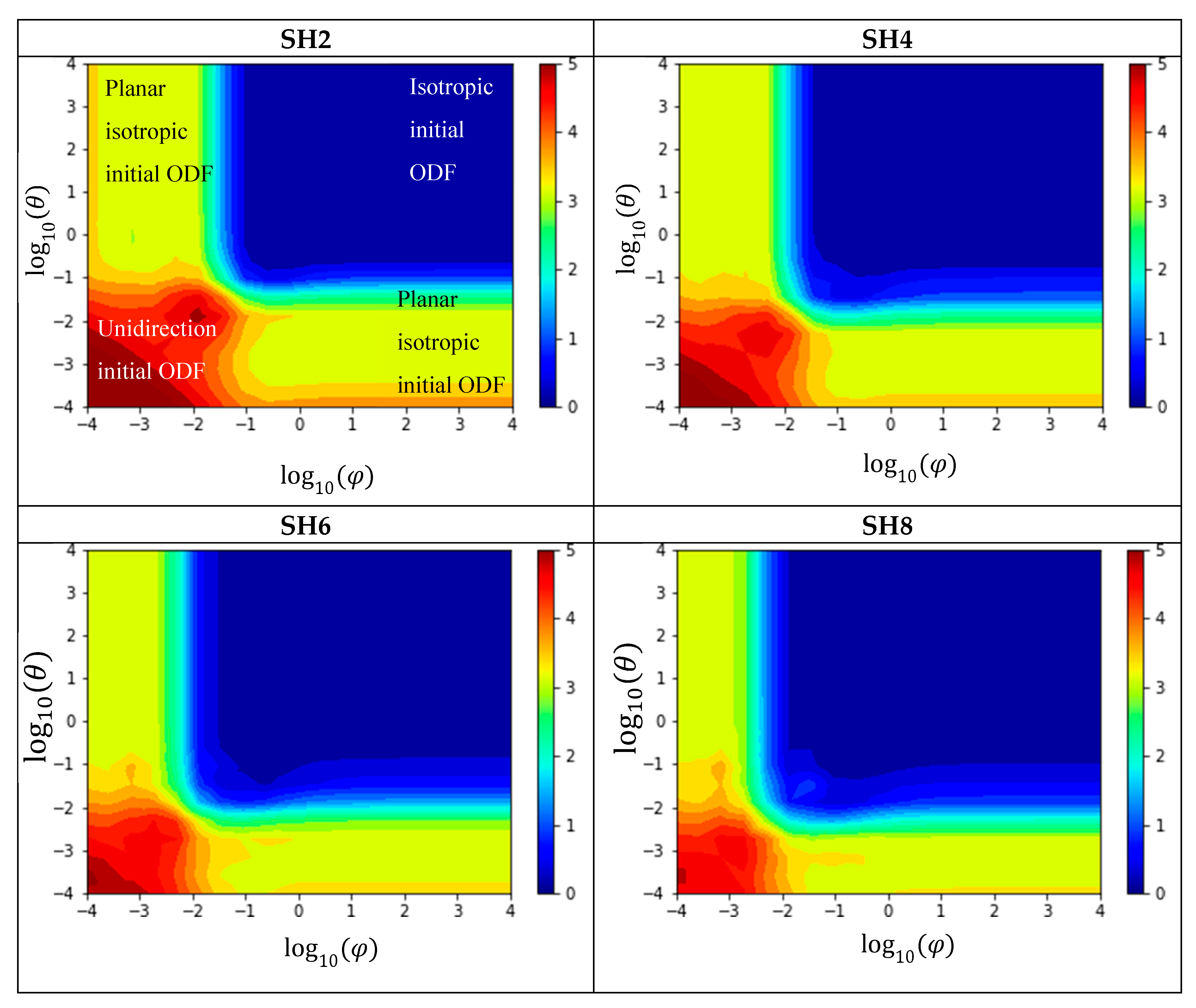 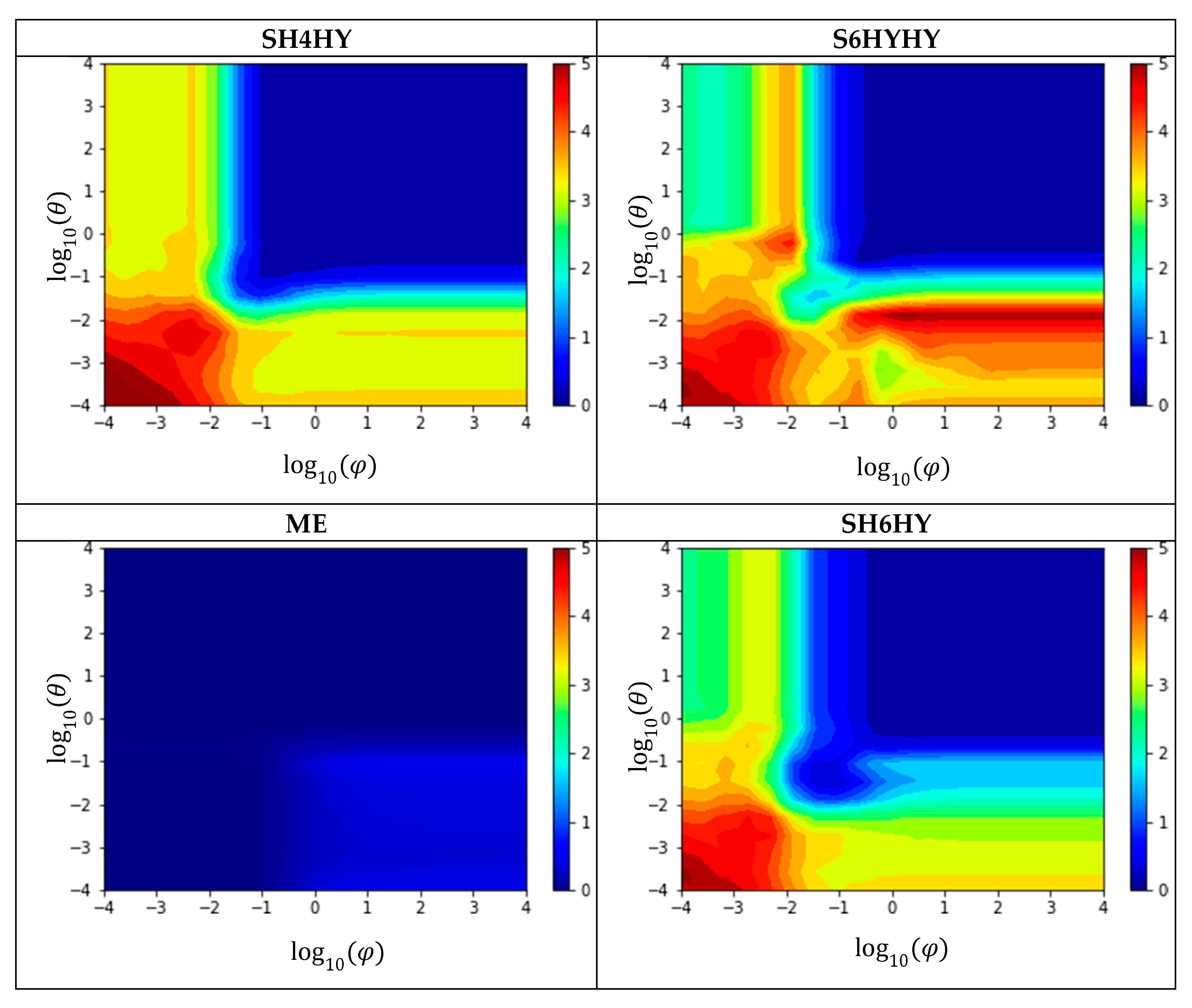 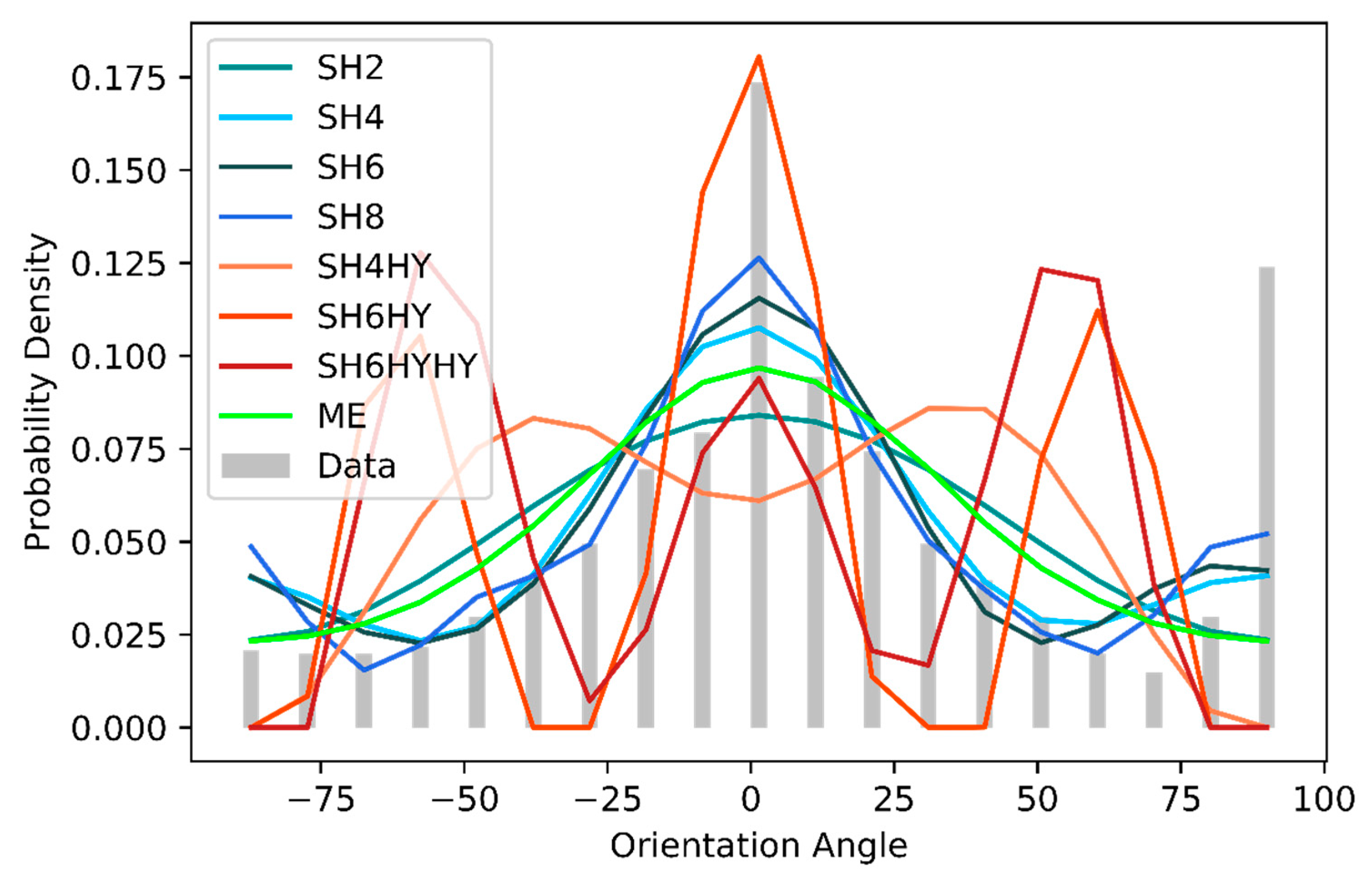