Drone Monitoring of Breeding Waterbird Populations: The Case of the Glossy Ibis

Waterbird communities are potential indicators of ecological changes in threatened wetland ecosystems and consequently, a potential object of ecological monitoring programs. Waterbirds often breed in largely inaccessible colonies in flooded habitats, so unmanned aerial vehicle (UAV) surveys provide a robust method for estimating their breeding population size. Counts of breeding pairs might be carried out by manual and automated detection routines. In this study we surveyed the main breeding colony of Glossy ibis (Plegadis falcinellus) at the Doñana National Park. We obtained a high resolution image, in which the number and location of nests were determined manually through visual interpretation by an expert. We also suggest a standardized methodology for nest counts that would be repeatable across time for long-term monitoring censuses, through a supervised classification based primarily on the spectral properties of the image and a subsequent automatic size and form based count. Although manual and automatic count were largely similar in the total number of nests, accuracy between both methodologies was only 46.37%, with higher variability in shallow areas free of emergent vegetation than in areas dominated by tall macrophytes. We discuss the potential challenges for automatic counts in highly complex images. View Full-Text
Keywords: UAV; aerial survey; long-term monitoring; Plegadis falcinellus; bird censuses; supervised classification; image processing UAV; aerial survey; long-term monitoring; Plegadis falcinellus; bird censuses; supervised classification; image processing
►▼ Show Figures 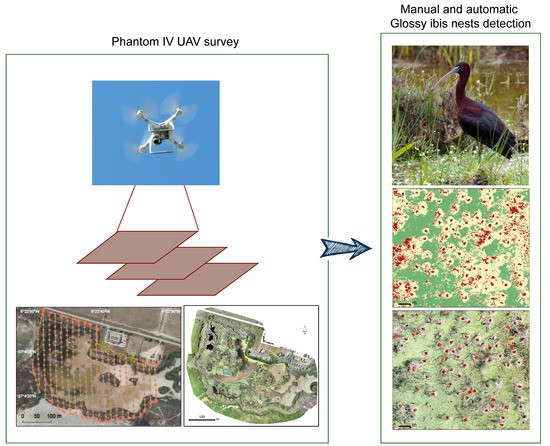