Drone Monitoring of Breeding Waterbird Populations: The Case of the Glossy Ibis
Previous Article in Journal

Use of UAV-Borne Spectrometer for Land Cover Classification

As with other species of great apes, chimpanzee numbers have declined over the past decades. Proper conservation of the remaining chimpanzees requires accurate and frequent data on their distribution and density. In Tanzania, 75% of the chimpanzees live at low densities on land outside national parks and little is known about their distribution, density, behavior or ecology. Given the sheer scale of chimpanzee distribution across western Tanzania (>20,000 km2), we need new methods that are time and cost efficient while providing precise and accurate data across broad spatial scales. Scientists have recently demonstrated the usefulness of drones for detecting wildlife, including apes. Whilst direct observation of chimpanzees is unlikely given their elusiveness, we investigated the potential of drones to detect chimpanzee nests in the Issa valley, western Tanzania. Between 2015 and 2016, we tested and compared the capabilities of two fixed-wing drones. We surveyed twenty-two plots (50 × 500 m) in gallery forests and miombo woodlands to compare nest observations from the ground with those from the air. We performed mixed-effects logistic regression models to evaluate the impact of image resolution, seasonality, vegetation type, nest height and color on nest detectability. An average of 10% of the nests spotted from the ground were detected from the air. From the factors tested, only image resolution significantly influenced nest detectability in drone-acquired images. We discuss the potential, but also the limitations, of this technology for determining chimpanzee distribution and density and to provide guidance for future investigations on the use of drones for ape population surveys. Combining traditional and novel technological methods of surveying allows more accurate collection of data on animal distribution and habitat connectivity that has important implications for ape conservation in an increasingly anthropogenically-disturbed landscape. View Full-Text
Keywords: UAV; great apes; conservation; survey; Tanzania; image resolution UAV; great apes; conservation; survey; Tanzania; image resolution
►▼ Show Figures 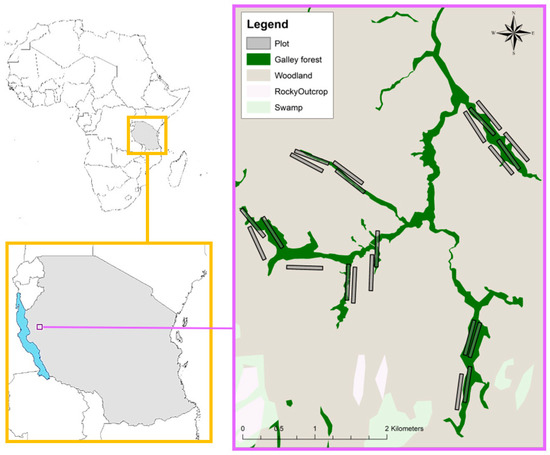