Understanding the Importance of Front Yard Accessibility for Community Building: A Case Study of Subiaco, Western Australia
Next Article in Special Issue

A Method for Mapping Future Urbanization in the United States

Cities are poised to absorb additional people. Their sustainability, or ability to accommodate a population increase without depleting resources or compromising future growth, depends on whether they harness the efficiency gains from urban land management. Population is often projected as a bulk national number without details about spatial distribution. We use Landsat and population data in a methodology to project and map U.S. urbanization for the year 2020 and document its spatial pattern. This methodology is important to spatially disaggregate projected population and assist land managers to monitor land use, assess infrastructure and distribute resources. We found the U.S. west coast urban areas to have the fastest population growth with relatively small land consumption resulting in future decrease in per capita land use. Except for Miami (FL), most other U.S. large urban areas, especially in the Midwest, are growing spatially faster than their population and inadvertently consuming land needed for ecosystem services. In large cities, such as New York, Chicago, Houston and Miami, land development is expected more in suburban zones than urban cores. In contrast, in Los Angeles land development within the city core is greater than in its suburbs. View Full-Text
Keywords: population; NLCD; land use; CONUS; impervious surface; CIESIN population; NLCD; land use; CONUS; impervious surface; CIESIN
►▼ Show Figures 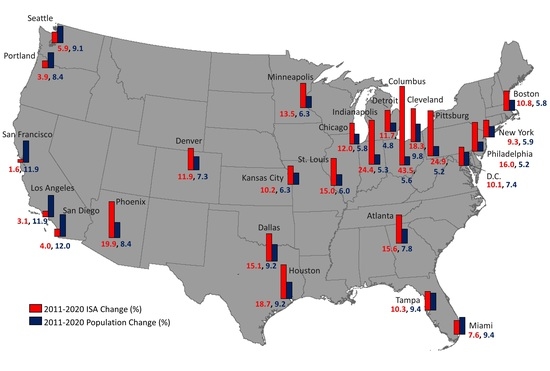