Effects of the Use of Good Agricultural Practices on Aflatoxin Levels in Maize Grown in Nandi County, Kenya

This study assessed farmers’ perception of climate change, and estimated the determinants of, and evaluated the relationship among, adaptation practices using the multivariate probit model. A survey in 300 agricultural households was carried out covering 10 sample districts considering five agro-ecological zones and a vulnerability index. Four adaptation choices (change in planting date, crop variety, crop type and investment in irrigation) were deemed as outcome variables and socioeconomic, demographic, institutional, farm-level and perceptions variables were deployed as explanatory variables. Their marginal effects were determined for three climatic variables—temperature, precipitation and drought. Age, gender and education of head of household, credit access, farm area, rain-fed farming and tenure, were found to be more influential compared to other factors. All four adaptation options were found to be complimentary to each other. Importantly, the intensity of the impact of dependent variables in different models, and for the available adaptation options, were found to be unequal. Therefore, policy options and support facilities should be devised according to climatic variables and adaptation options to achieve superior results. View Full-Text
Keywords: adaptation; perception; climate change; Nepal; multivariate probit adaptation; perception; climate change; Nepal; multivariate probit
►▼ Show Figures 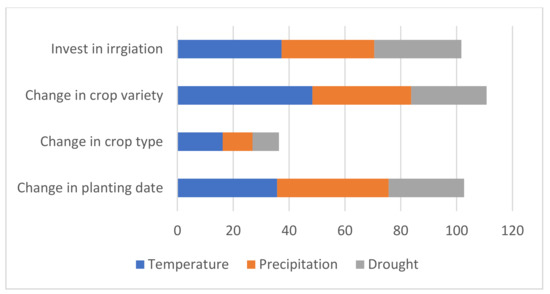