Effects of the Use of Good Agricultural Practices on Aflatoxin Levels in Maize Grown in Nandi County, Kenya

Aflatoxin contaminated maize is of public health concern in Kenya. Training farmers on good agricultural practice (GAP) has been touted as a mitigative measure. Little is known of the effect of such training on aflatoxin levels in maize grown in Kenya. This study evaluated what effect training farmers on GAP has on aflatoxin levels in maize grown in Kaptumo, Kilibwoni, and Kipkaren divisions in Nandi County. Ninety farmers were recruited for the study and interviewed on GAP. Maize samples were additionally collected from the participating farmers and analyzed for aflatoxins using competitive enzyme-linked immunosorbent assay (c-ELISA). All farmers prepared the land before planting, applied correct spacing between the planted crops, carried out weeding, cleaned their stores before use, checked the condition of the maize after harvesting, sorted maize after shelling, and knew about aflatoxins. The majority of the farmers (90%) used fertilizers, dried maize after harvesting, knew that aflatoxins were harmful to humans, and used clean transport in transporting the harvested maize. About 98% of farmers did stooking after harvesting and 97% used wooden pallets in the maize stores. The percentage of farmers who practiced early planting, top dressing, crop rotation, raising stores above the ground, applying insecticide after shelling and feeding damaged/rotten seeds to their animals was 84–96%, 62–80%, 67–85%, 86–98%, 63–81%, and 7–21% respectively. About 18/90 (20%) of all farmers reported that they had a relative who had died from liver cancer, and the mean aflatoxin levels in season 1 were significantly different from those in season 2 (1.92 ± 1.07 ppb; 1.30 ± 1.50 ppb). Our findings suggest that although training farmers to adopt good agricultural practices was observed to be efficient in mitigating the problem of aflatoxins, the receptiveness of farmers to different aspects of the training may have differed. Therefore, in designing an optimized regional aflatoxin contamination strategy, local applicability should be considered. View Full-Text
Keywords: good agricultural practice; aflatoxin; Nandi County; mycotoxins; Kenya; maize good agricultural practice; aflatoxin; Nandi County; mycotoxins; Kenya; maize
►▼ Show Figures 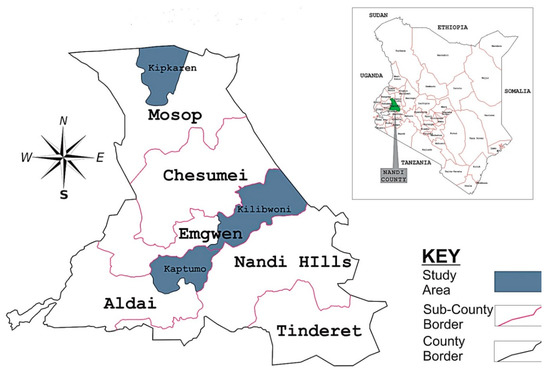