In the present study, a new approach to the installation of fiber Bragg grating (FBG) sensors in three asphalt pavement layers (the surface layer and both base layers) was implemented for the first time in Belgium. Fiber Bragg grating sensors (FBGs) are diagnostic tools that accurately and efficiently monitor in situ structural behavior. However, nowadays, this technology is not commonly used in asphalt due to its application restrictions under installation and service conditions. FBGs are fragile and break easily under loading. Therefore, there is a need for suitable protection of FBG sensors if they are to be installed during the rough construction process and exposed to heavy-duty loading afterwards. The main objective of the present study is to show the FBG results only for the initial construction process, and, if successful, to continue studying this FBG monitoring system and to plan the next research step by adjusting the system for its application in heavy-duty pavements. Two approaches to FBG installation in three asphalt layers (placed at the bottom of each layer) were tested in the present study: (1) installation of FBGs in prefabricated asphalt specimens in the base layer, directly on the base, and (2) installation of FBGs on the surface of the previously constructed asphalt layer. Both innovative approaches allow the implementation of FBGs without sawing the whole layer into two parts. The obtained results proved a survival rate of 100% for the FBGs. It can be concluded that these new described methods of FBG installation—using a cross-section configuration to carry out strain measurements in two directions (transverse and longitudinal)—can be applied for the monitoring of heavy-duty pavements, while providing the possibility to further re-evaluate current pavement design methods used in Flanders (Belgium).
Keywords: fiber Bragg grating (FBG) sensors; asphalt; cross-section configuration; real-time monitoring; Flanders fiber Bragg grating (FBG) sensors; asphalt; cross-section configuration; real-time monitoring; Flanders

FBGs are rather fragile and can break easily under loading; therefore, there is a need for suitable protection of these sensors if they are going to be installed during the rough construction process. For appropriate protection, which guarantees the accuracy of both strain and temperature measurements, in the present study, commercially available, organic modulated, ceramic-coated Draw Tower Gratings (DTG®), embedded in a glass fiber reinforced plastic (GFRP) round profile with an outer diameter of 1 mm and protected with an additional high-density polyethylene (HDPE) coating with outer diameter of 0.5 mm, were used (see Figure 1). These DTGs can measure very high strain levels (>10,000 µm/m) and are supposed to show an excellent long-term stability under mechanical fatigue conditions. Draw Tower Gratings (DTG®s) are produced during the drawing process of the fiber itself, before the primary coating is applied. Considering that it is a cost-effective production process for high quality fiber Bragg gratings, it offers unique characteristics, such as extremely high breaking strength, an operational temperature range of up to 200 °C (for ORMOCER®), insensitivity to bending, spliceless array configurations, and uniform coating coverage, which are very important for application of these fibers in asphalt pavement.

In the present study, FBG chains of 30 DTG® (1529.7–1567.4 nm) and 5 DTG® (1530–1558 nm) were selected for installation in each of three superimposed asphalt layers (the surface layer and both base layers). The FBGs were placed in a cross-section configuration in order to carry out measurements in two directions—transverse and longitudinal directions (in a bicycle path with width of 4 m and length over 3.2 m) (see Figure 2b). The asphalt mix was applied at a temperature between 120 and 160 °C. It was very important to allocate each fiber at the bottom of each layer in transverse (T) and longitudinal (L) directions. Two new approaches to FBG installation in three asphalt layers were tested: (1) installation of FBGs in prefabricated asphalt in the bottom of the base layer (see Figure 2a) and (2) installation of FBGs in the surface of the previously constructed asphalt layer (see Figure 2b). Both innovative approaches allow the implementation of FBGs without sawing the whole layer into two parts. The FBG configuration is shown in Figure 3.
After an extensive literature review study, it was concluded that the protection of sensors is an ongoing challenging issue to deal with, especially the protection of FBG sensors installed at very high asphalt temperatures and during heavy compaction loadings. Several protection measures, including fiber reinforced polymer (FRP), steel tubing, and carbon fiber reinforced epoxy resin coatings, have been shown to be able to provide adequate protection. However, in order to guarantee the survival of FBGs during the installation process in the base asphalt layer in this case study, it was decided to embed them in prefabricated asphalt specimens (see Figure 4) and adjust on-site during the construction process.
For this first approach to FBG installation, asphalt slabs with dimensions 600 × 400 × 50 mm were produced under laboratory conditions, with the same asphalt mix composition as the base layer used during the bicycle path construction process. The slabs were sawn into specimens with dimensions 500 × 50 × 15 mm, and a groove with a depth of 2 mm was made in each specimen. The FBGs were positioned in a groove of the prefabricated asphalt specimens on-site and covered with a thin layer of mastic to keep FBGs in the desired position inside the groove. Prefabricated asphalt specimens were connected to each other on-site by gluing them together with a layer of mastic. Prefabricated asphalt specimens were placed with the groove facing down on the unbound material base layer. In order to avoid collapse of the prefabricated asphalt specimens, steel plates with dimensions of 340 × 300 × 5 mm were placed on top of the specimens during the construction process when the asphalt truck and the paver were driving over them (see Figure 5).

2.3. Monitoring of FBGs during the Pavement Construction Process

The installation of the FBG monitoring system was a part of a larger project—CyPaTs (www.uantwerpen.be/cypats), in which a bicycle path (length—96 m and width—4 m) was accomplished over 3 days (one asphalt pavement layer per day). During the first day, FBGs (T1 and L1) were installed in the prefabricated asphalt specimens, and the first strain measurements were carried out after the first base layer (AC-14) was laid down. FBGs (T2 and L2) were installed in grooves (in the upper section of this base layer) after 2 h on the same day. In order to ensure the bonding of the interfaces between asphalt layers, a tack coat was applied (see Figure 6). During the second day, FBGs (T1, T2, L1, L2) were monitored during construction of the second base layer (AC-10) while the asphalt truck and the paver were crossing the sensing zone. FBGs (T3 and L3) were installed in grooves after 2 h on the second day. During the third day, all FBGs in T and L directions were monitored during construction works. The strain and temperature data were obtained using an interrogator FBG-SCAN 808D with eight channels (1510–1590 nm wavelength range, 250 Hz measurement speed for all channels).

Considering that the FBG monitoring system was installed in the bicycle path within the CyPaTs project (September 2017) for the first time in Belgium, the aim of the present study is to show the FBGs results only for the initial construction process, and, if successful, to continue studying this FBG monitoring system and to plan the next research step by adjusting the system for its application in heavy-duty pavements. The results obtained during the initial pavement construction process showed that the FBGs are a feasible technology to monitor strain progression during asphalt layer construction. It was observed that, during the construction process, one side of the road was always overstressed compared to the other side; this can be detected only by the application of FBGs. This different compaction grade can eventually lead to different deformation behavior, although the same asphalt mix was used for this section. However, within this study, the conclusion cannot be made for the service life of the asphalt layers. Obtained results proved a survival rate of 100% for the FBGs. Two approaches to FBG installation in three asphalt layers (placed at the bottom of each layer): (1) installation of FBGs in prefabricated asphalt specimens in the base layer, directly on the base, and (2) installation of FBGs on the surface of the previously constructed asphalt layer, are feasible to implement properly on-site. Numerous sensors installed between the asphalt layers allow better descriptions of the behavior of asphalt layers under loading during real-time monitoring. This technology may be able to provide strain data for the service life of the asphalt layers during a subsequent monitoring campaign. Since the accuracy is very high, this technology is appropriate for monitoring the deformation of the asphalt layers over time, taking into account aging, fatigue, rutting, and even healing properties. As a result, this will allow design of an accurate pavement response model, using real-time monitoring data from the FBG sensors embedded in asphalt layers, and possibly re-evaluate current pavement design methods used in Flanders (Belgium).

P.K.D.M. and W.V.d.b. designed experiments; P.K.D.M. performed experiments, analyzed the data and wrote the original paper draft; P.K.D.M., W.V.d.b. and C.V. worked on the final draft of the paper. 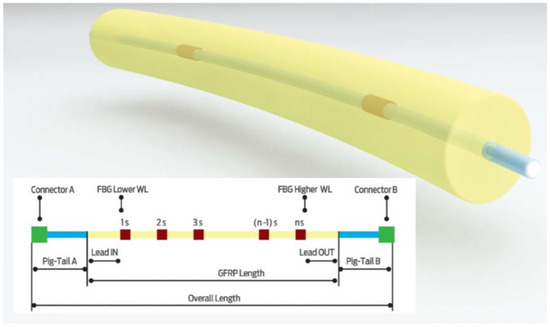 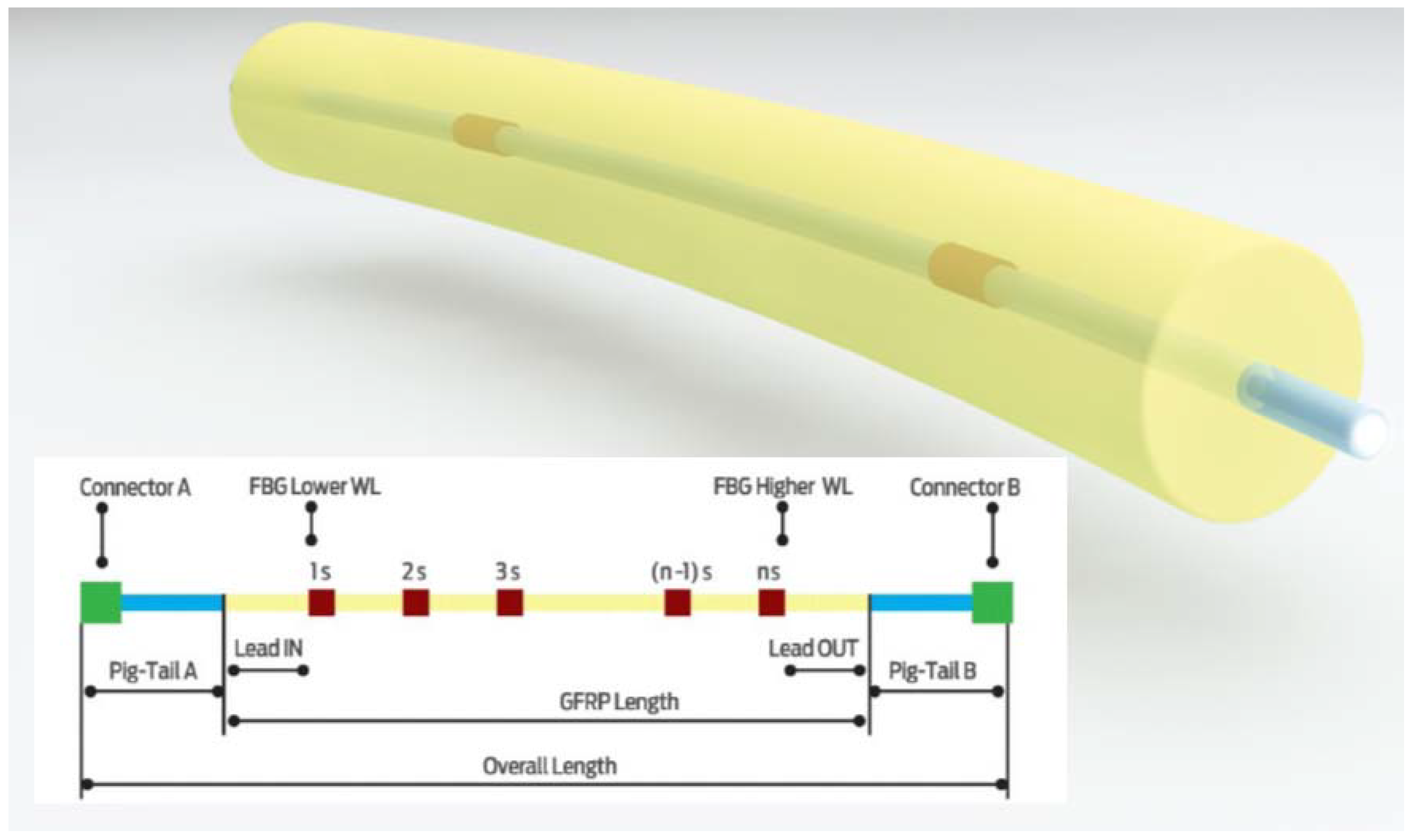 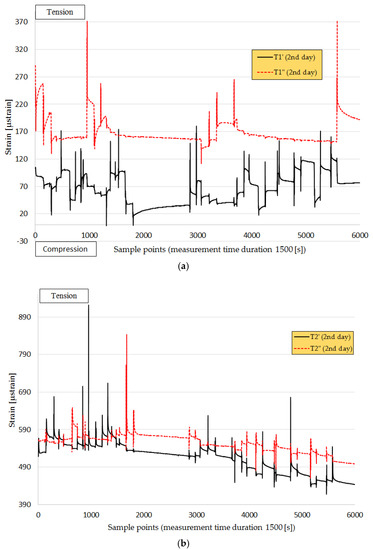 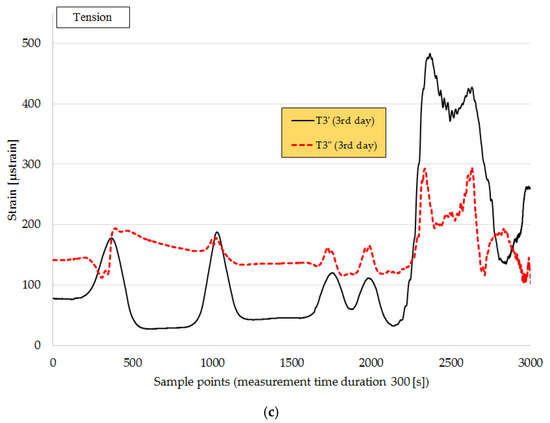 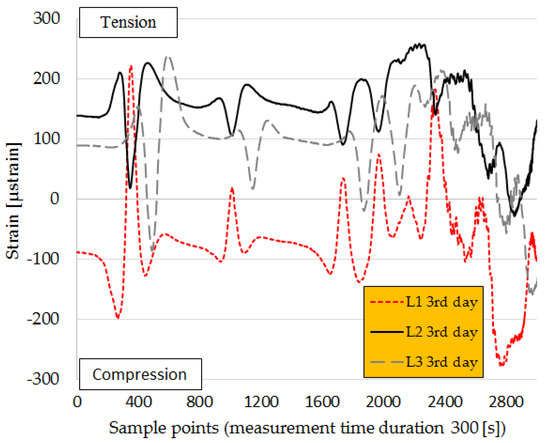 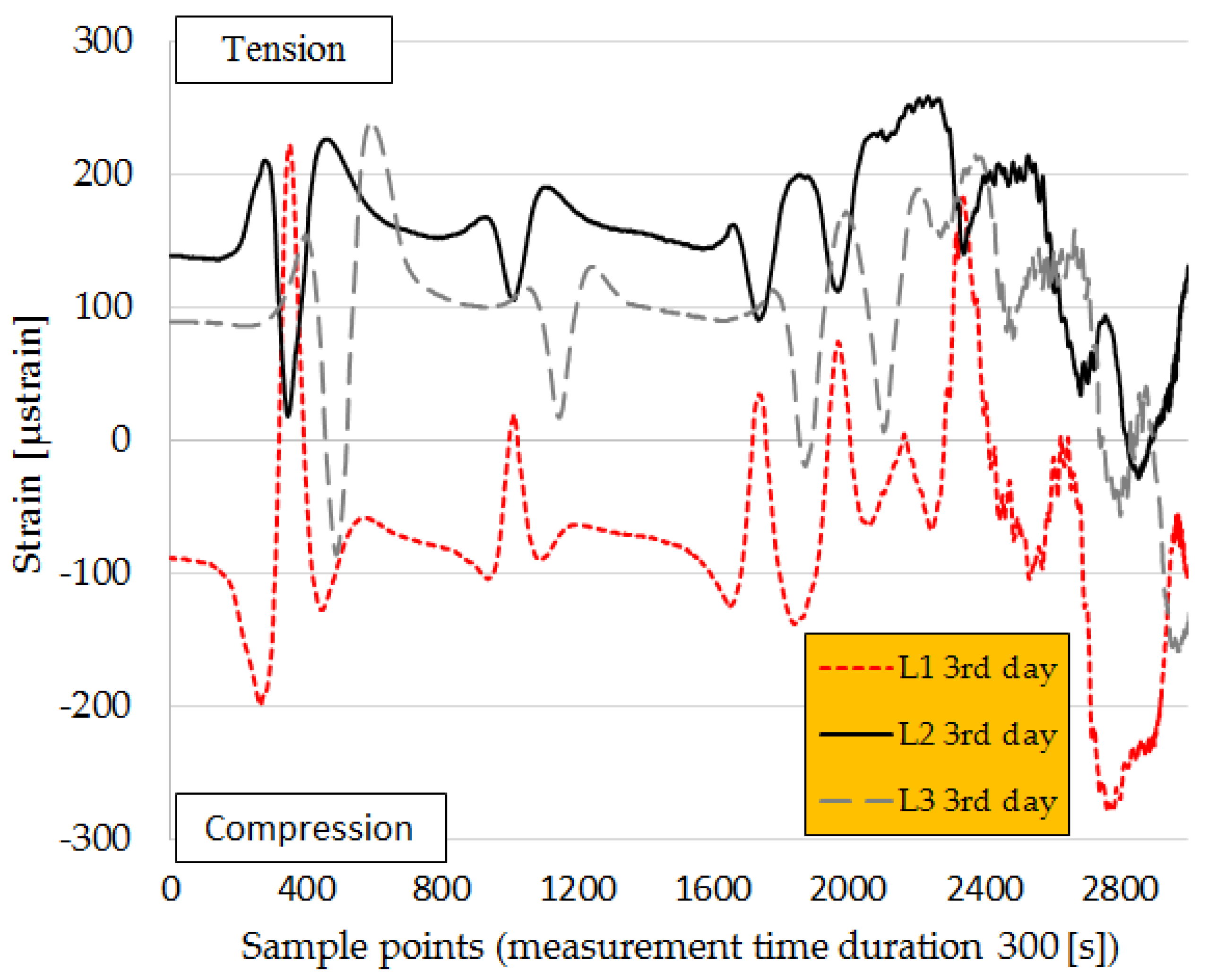 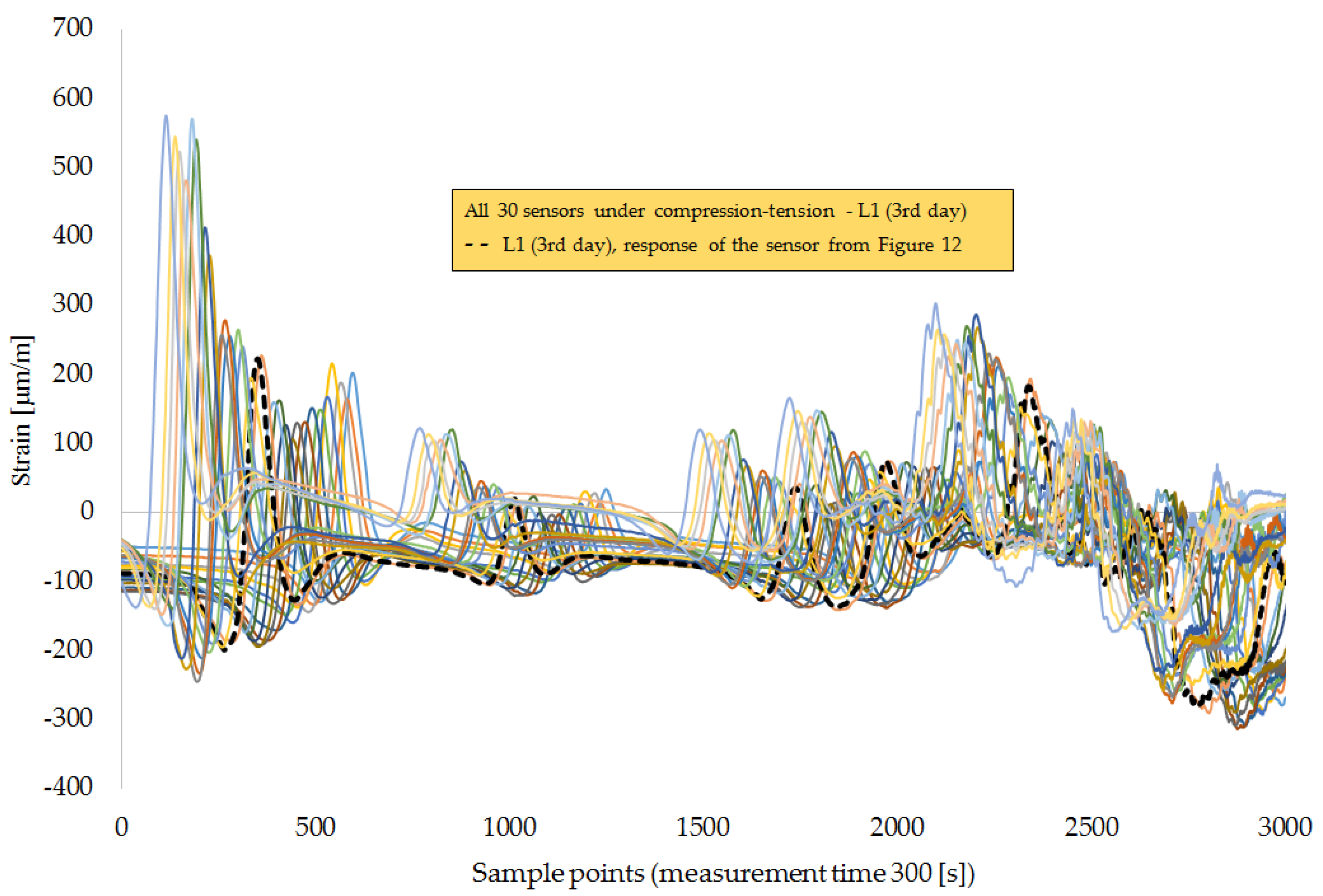