Tunneling in highly permeable ground using a slurry shield machine can be challenging because it is difficult to form the so-called filter cake on the tunnel face to transport the support pressure. Consequently, destructive accidents might happen, such as face instability and water inrush. How to form an efficient filter cake in time is crucial during engineering practice, especially in ground with high permeability. Various theoretical and experimental analyses regarding the formation of filter cakes have been conducted. However, due to the complexity of this problem, which has to incorporate the mechanical and hydraulic behaviors of the fluid–solid mixture system, few numerical simulations are found in the literature. In this paper, with the aid of a newly developed numerical tool, a coupled CFD (computational fluid dynamics)–DEM (discrete element method) simulation is established to study the slurry infiltration and filter cake formation during slurry shield tunneling. The slurry infiltration process is simulated by modelling the scheme of the infiltration column test, in which sedimentation behaviors of slurry particles are captured and compared with experimental results. The results show that the sedimentation behaviors of the slurry particles and filter cake formation phenomenon are well captured by simulations and in accordance with the experiments, which indicates the robustness of the coupled CFD–DEM simulation used in present work. View Full-Text
Keywords: slurry shield tunneling; filter cake; coupled CFD–DEM simulation slurry shield tunneling; filter cake; coupled CFD–DEM simulation
►▼ Show Figures 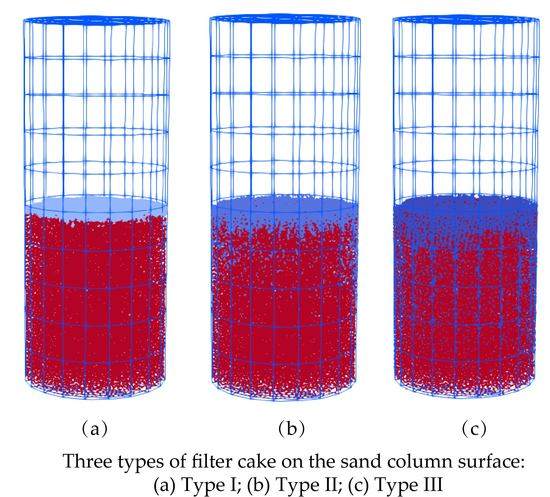