Open Tibial Fracture in a Non-Compliant Patient: A Case Report
Next Article in Special Issue

The rate of force development (RFD) is vital for power athletes. Lean body mass (LBM) is considered to be an essential contributor to RFD, nevertheless high RFD may be achieved by athletes with either high or low LBM. The aim of the study was to describe the relationship between lower-body LBM and RFD, and to compare RFD in taekwondo athletes and track and field (T&F) throwers, the latter having higher LBM when compared to taekwondo athletes. Nine taekwondo athletes and nine T&F throwers were evaluated for countermovement jumping, isometric leg press and leg extension RFD, vastus lateralis (VL), and medial gastrocnemius muscle architecture and body composition. Lower body LBM was correlated with RFD 0–250 ms (r = 0.81, p = 0.016). Taekwondo athletes had lower LBM and jumping power per LBM. RFD was similar between groups at 30–50 ms, but higher for throwers at 80–250 ms. RFD adjusted for VL thickness was higher in taekwondo athletes at 30 ms, but higher in throwers at 200–250 ms. These results suggest that lower body LBM is correlated with RFD in power trained athletes. RFD adjusted for VL thickness might be more relevant to evaluate in power athletes with low LBM, while late RFD might be more relevant to evaluate in athletes with higher LBM. View Full-Text
Keywords: combat sports; muscle power; body composition; muscle architecture combat sports; muscle power; body composition; muscle architecture
►▼ Show Figures 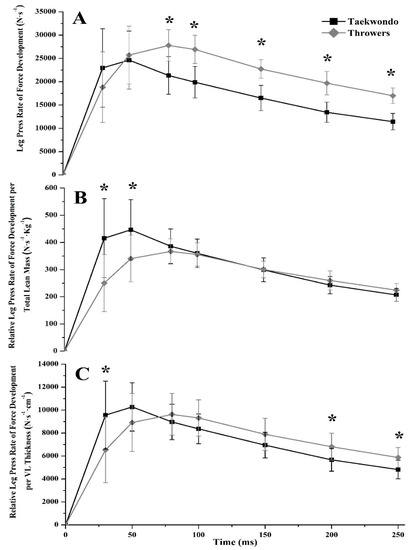