Traditional methods to measure strain such as foil strain gauges are commonly used on large scale structural tests. However, they are limited to measuring strain at discrete locations. Novel approaches using optical fibers have been developed to measure large and high-spatial distributions of strain. These optical fibers can also be embedded within composite structural aircraft components. For example, Minakuchi et al. [1] monitored the entire life-cycle of a component structural panel using a fiber-optic-based Brillouin scattering technique. It was determined that a single embedded optical fiber could monitor the internal strain from the manufacturing process and post impact tests [1]. The efficacy of the optical fibers to measure strain distributions has also been extended to structural joints. Graves et al. [2] used optical fibers to understand the internal strain distributions of metallic lap joints and a patch repair of a composite I-beam. Interestingly, damage can be indicated from internal strain fields due to a reduction in axial strain from interlaminar shear stresses. In addition, Davis et al. [3] evaluated the use of distributed optical fibers to detect strain responses under fatigue loads and acoustic signals [3]. Optical fibers demonstrated a potential to detect crack propagation with multiple fiber passes on an open-hole tensile coupon.
The primary advantage of distributed optical fibers is the tailorability of the sensor to measure high-spatial strain distributions in any in-plane orientation. This capability allows for the development of optical fiber sensors comprised of unique patterns or configurations that would be otherwise difficult with traditional systems. Batte et al. [4] used a grid-like pattern of optical fibers at varying depths within a composite laminate to estimate residual stresses after impact. Similarly, Choi and Kwon [5] bonded optical fibers in the hoop direction along the length of a composite cylinder to estimate the extent of residual strain away from an impact site. Drake et al. [6] used a serpentine configuration of optical fiber to estimate the residual stresses from the curing process of carbon/epoxy laminates. Meadows et al. [7] used a looping configuration to estimate the shape of the crack front generated from end-notch flexural tests. A variety of configurations are being used to detect damage and determine residual stresses. However, a critical assessment of these configurations has not been performed.
In this paper, strain distributions obtained from optical fibers for different optical fiber configurations (rosette, grid, and spiral designs) bonded to aluminum were investigated. Three cantilevered prismatic aluminum beams were subjected to tip loads. Analytical calculations from traditional mechanics of materials and strain gauge measurements were used to compare strain results obtained from the optical fiber sensors. In the following sections, an overview of the optical fiber sensing technique, analytical computations, the fabrication process, experimental procedure, and results are discussed.

The Euler-Bernoulli beam theory is used for comparison to the optical fiber strains for each cantilever beam. The internal bending moment in the cantilevered beam (Figure 1a) is determined from its free-body diagram (Figure 1b) as where M and P are the internal moment and applied force, respectively. The distance a corresponds to the distance between the end of the applied beam and the applied force.
To estimate the stress σ in the cross-section of the cantilever beam, the flexure formula [11] is used as where z is the coordinate from the neutral axis, I is the moment of inertia, and M is the moment. The maximum stress is obtained when z equals the furthermost distance c from the neutral axis as where b and h are the width and height of the rectangular cross-section, respectively, as shown in Figure 1c. Hooke’s law, with Young’s modulus E, is used to estimate the maximum strain (ε) on the surface of the cantilever beam as

Each beam was clamped to a beam test apparatus as shown in Figure 4. A tip load was applied using a turn-buckle in 4.45 N increments to a maximum of 22.25 N. To remove effects from the mounting/curing processes as well as any deviation from the surface, all measurements from the optical fibers and strain gauges were tared to a zero value prior to loading the cantilevered beams. The applied loading was kept below the proportional limit of the aluminum beam to minimize the amount of hysteresis that may occur during loading and unloading. Research has shown that the hysteresis of plastic optical fibers is significantly reduced when mounted to a metallic substrate [13]. Also, since the optical fiber used in this study has a glass core, the hysteresis effects are regarded to be minimal and within the error of the system. An SML-200 load cell was used to measure the load with a 0.05% accuracy and a maximum capability of 890 N. The surface strains from each optical fiber sensor were measured using the LUNA Technologies ODiSI-B system. Additionally, strains were measured from each strain gauge using the Vishay Micro-Measurements P3 Strain Indicator and Recorder.

This material is based upon work supported by the National Aeronautics and Space Administration Marshall Space Flight Center under Grant No. NNX16AN40G. This research was also supported by the Office of Research and Economic Development at Mississippi State University through the Undergraduate Research Program. 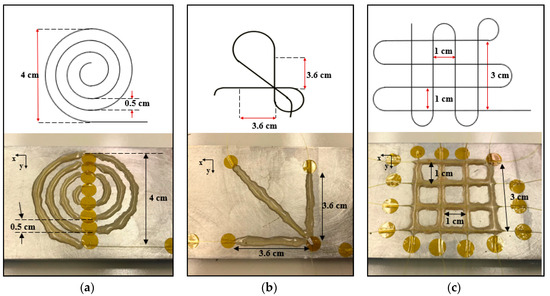 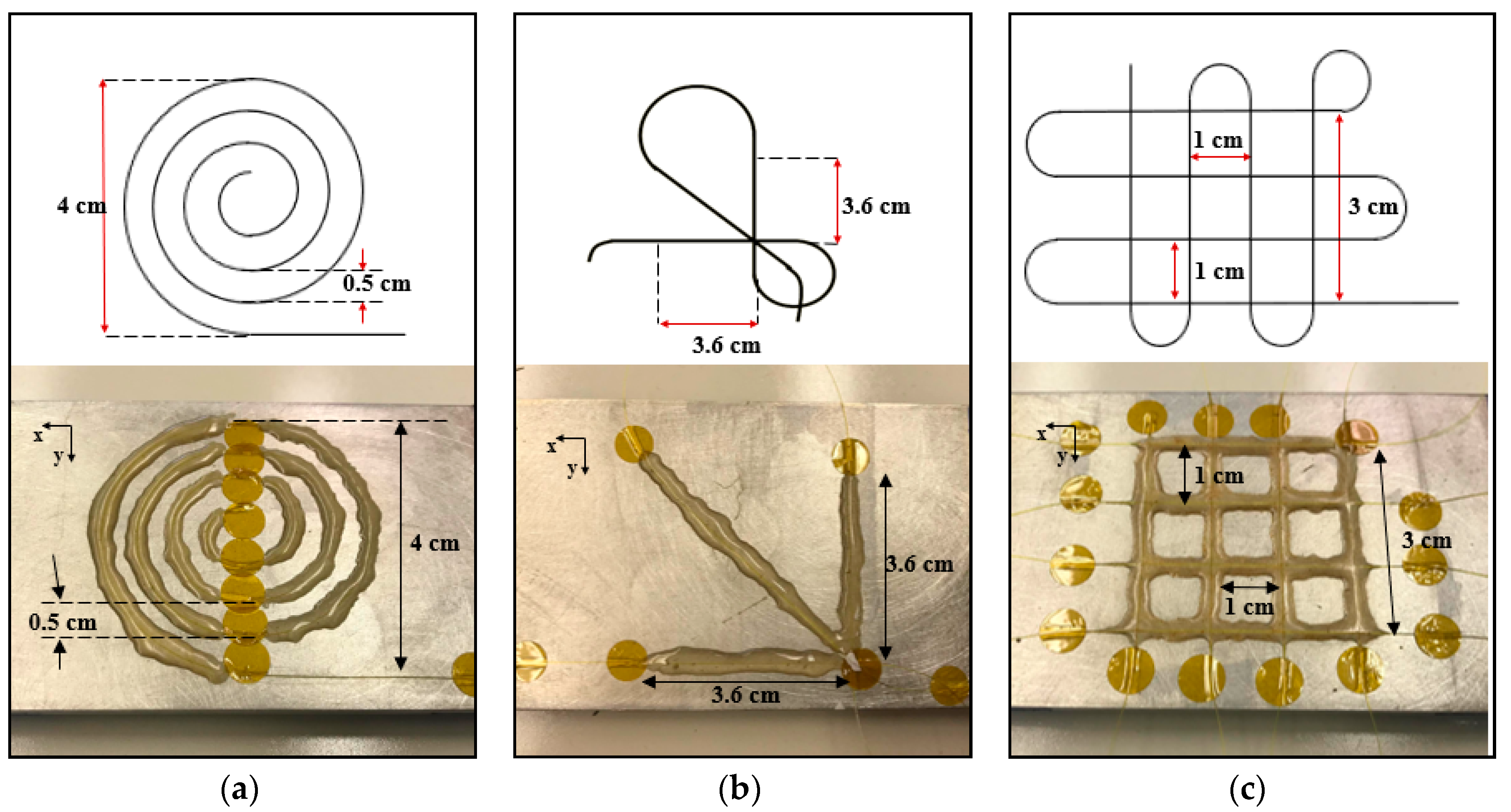 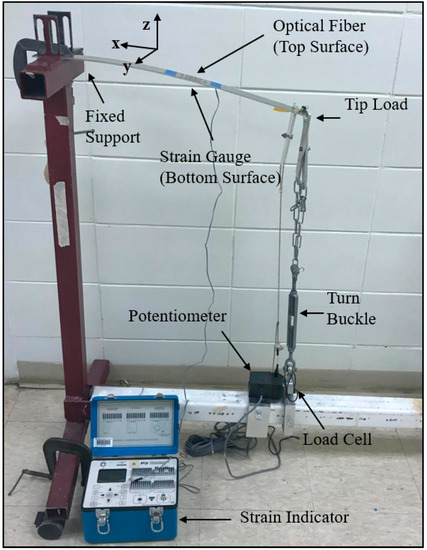 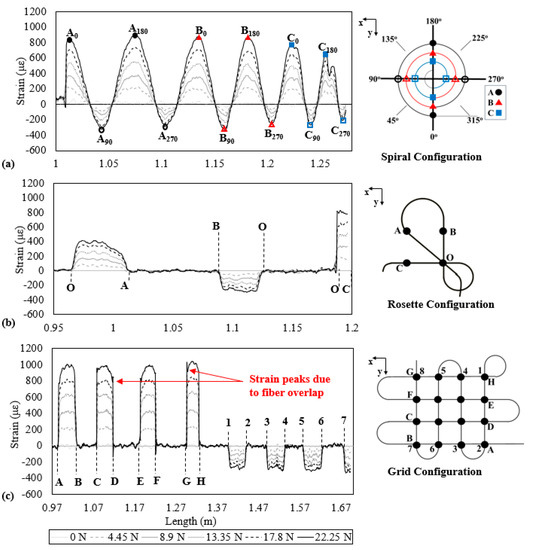 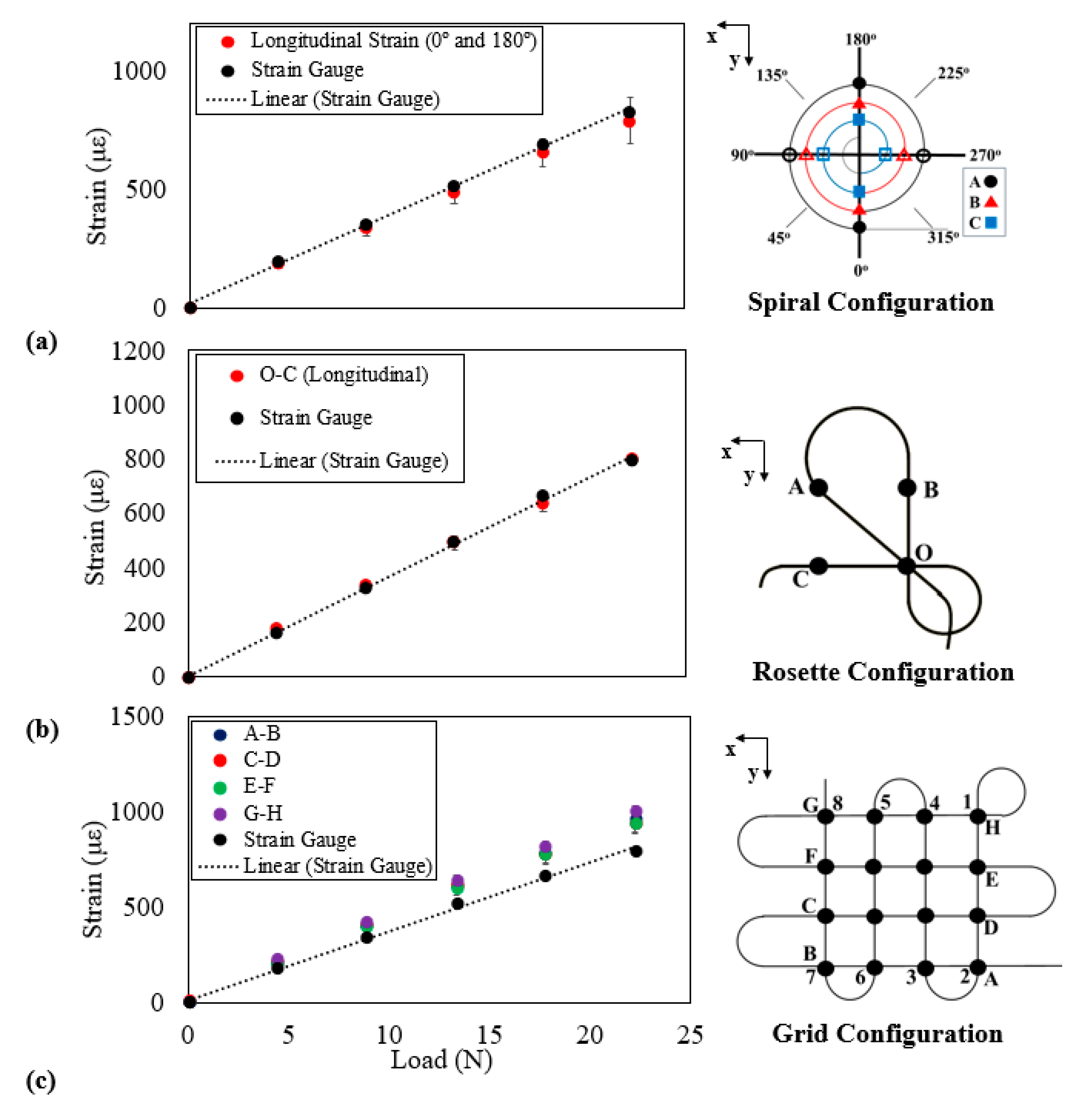 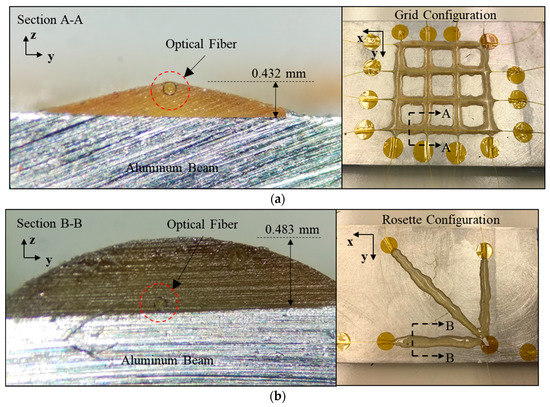 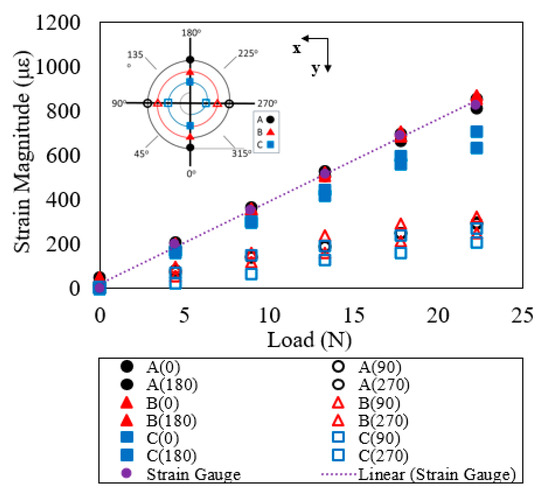