Returning to Our Roots: Tribal Health and Wellness through Land-Based Healing

(1) Background: Settler colonialism has severely disrupted Indigenous ancestral ways of healing and being, contributing to an onslaught of health disparities. In particular, the United Houma Nation (UHN) has faced large land loss and trauma, dispossession, and marginalization. Given the paucity of research addressing health for Indigenous individuals living in Louisiana, this study sought to co-identify a United Houma Nation health framework, by co-developing a community land-based healing approach in order to inform future community-based health prevention programs. (2) Methods: This pilot tested, co-designed and implemented a land-based healing pilot study among Houma women utilizing a health promotion leadership approach and utilized semi-structured interviews among 20 UHN women to identify a UHN health framework to guide future results. (3) Results: The findings indicated that RTOR was a feasible pilot project. The initial themes were (1.) place, (2.) environmental/land trauma, (3.) ancestors, (4.) spirituality/mindfulness, (5.) cultural continuity, and (6.) environment and health. The reconnection to land was deemed feasible and seen as central to renewing relationships with ancestors (aihalia asanochi taha), others, and body. This mindful, re-engagement with the land contributed to subthemes of developing stronger tribal identities, recreating ceremonies, and increased cultural continuity, and transforming narratives of trauma into hope and resilience. Based on these findings a Houma Health (Uma Hochokma) Framework was developed and presented. (4) Conclusions: Overall, this study found that land can serve as a feasible therapeutic site for healing through reconnecting Houma tribal citizens to both ancestral knowledges and stories of resilience, as well as viewing self as part of a larger collective. These findings also imply that revisiting historically traumatic places encouraged renewed commitment to cultural continuity and health behaviors—particularly when these places are approached relationally, with ceremony, and traumatic events tied to these places, including climate change and environmental/land trauma, are acknowledged along with the love the ancestors held for future generations. View Full-Text
Keywords: Indigenous; Native American; American Indian; land-based healing; place and health; health promotion; community engaged research; transformation of trauma; Indigenous mindfulness Indigenous; Native American; American Indian; land-based healing; place and health; health promotion; community engaged research; transformation of trauma; Indigenous mindfulness
►▼ Show Figures 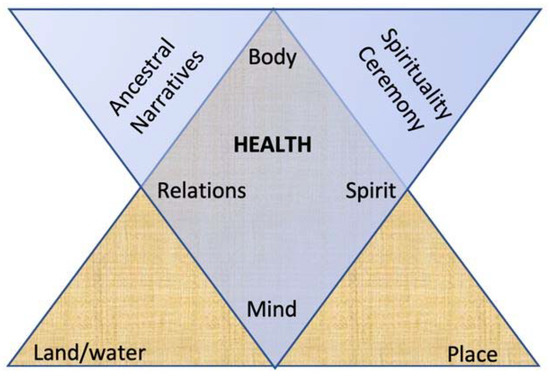