Rutile FeOF was used as a conversion-type cathode material for Li-ion batteries. In the present study, 0.6Li, 1.4Li, and 2.7Li per mole lithiation reactions were carried out by changing the electrochemical discharge reaction depth. The thermal characteristics of the FeOF cathode were investigated by thermogravimetric mass spectrometric (TG-MS) and differential scanning calorimeter (DSC) systems. No remarkable HF release was detected, even up to 700 °C, which indicated a low toxic risk for the FeOF cathode. Changes in the thermal properties of the FeOF cathode via different conversion reaction depths in the associated electrolyte were studied by changing the cathode/electrolyte ratio in the mixture. LiFeOF was found to exothermically react with the electrolyte at about 210 °C. Similar exothermic reactions were found with charged FeOF cathodes because of the irreversible Li ions. Among the products of the conversion reaction of FeOF, Li2O was found to exothermically react with the electrolyte at about 120 °C, which induced the main thermal risk of the FeOF cathode. It suggests that the oxygen-containing conversion-type cathodes have a higher thermal risk than the oxygen-free ones, but controlling the cathode/electrolyte ratio in cells successfully reduced the thermal risk. Finally, the thermal stability of the FeOF cathode was evaluated in comparison with FeF3 and LiFePO4 cathodes. View Full-Text
Keywords: Li-ion battery; FeOF; thermal stability; conversion-type cathode Li-ion battery; FeOF; thermal stability; conversion-type cathode
►▼ Show Figures 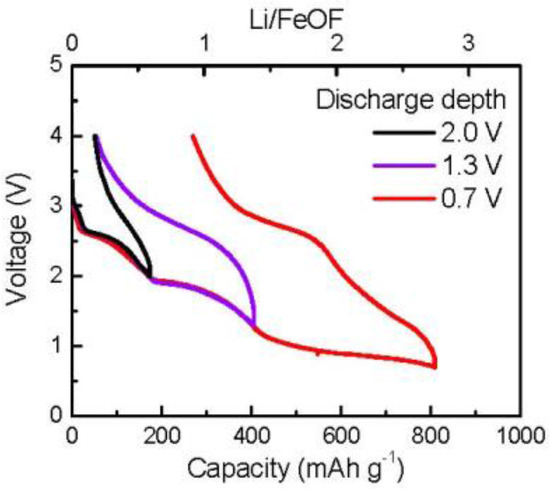