The Underexplored Field of Lanthanide Complexes with Helicene Ligands: Towards Chiral Lanthanide Single Molecule Magnets
Next Article in Special Issue

In this study, we performed a quantum mechanical examination of thermodynamic, structural, elastic, and magnetic properties of single-phase ferromagnetic FeCoAl with a chemically disordered B2-type lattice with and without antiphase boundaries (APBs) with (001) crystallographic orientation. FeCoAl was modeled using two different 54-atom supercells with atoms on the two B2 sublattices distributed according to the special quasi-random structure (SQS) concept. Both computational models exhibited very similar formation energies (−0.243 and −0.244 eV/atom), B2 structure lattice parameters (2.849 and 2.850 Å), magnetic moments (1.266 and 1.274 /atom), practically identical single-crystal elastic constants ( = 245 GPa, = 141 GPa, and similar = 132 GPa) and auxetic properties (the lowest Poisson ratio close to −0.1). The averaged APB interface energies were observed to be 199 and 310 mJ/m for the two models. The studied APBs increased the total magnetic moment by 6 and 8% due to a volumetric increase as well as local changes in the coordination of Fe atoms (their magnetic moments are reduced for increasing number of Al neighbors but increased by the presence of Co). The APBs also enhanced the auxetic properties. View Full-Text
Keywords: Fe2CoAl; disorder; antiphase boundaries; elasticity; magnetism; ab initio; auxetic Fe2CoAl; disorder; antiphase boundaries; elasticity; magnetism; ab initio; auxetic
►▼ Show Figures 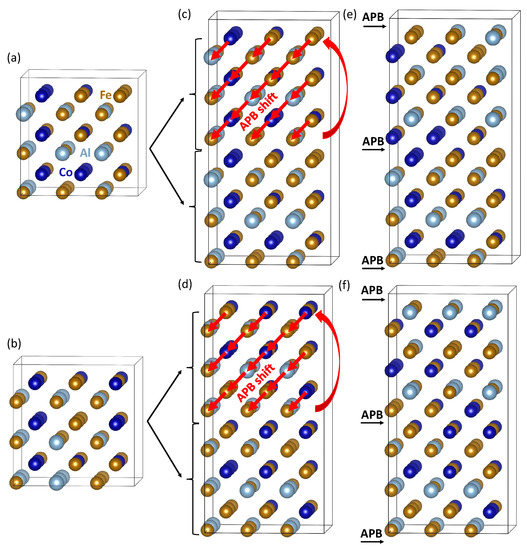