Five strawberry (Fragaria × ananassa Duch.) cultivars were grown in Queensland, Australia to determine whether higher temperatures affect production. Transplants were planted on 29 April and data collected on growth, marketable yield, fruit weight and the incidence of small fruit less than 12 g until 28 October. Additional data were collected on fruit soluble solids content (SSC) and titratable acidity (TA) from 16 September to 28 October. Minimum temperatures were 2 °C to 4 °C higher than the long-term averages from 1965 to 1990. Changes in marketable yield followed a dose-logistic pattern (p < 0.001, R2s = 0.99). There was a strong negative relationship between fruit weight (marketable) and the average daily mean temperature in the four or seven weeks before harvest from 29 July to 28 October (p < 0.001, R2s = 0.90). There were no significant relationships between SSC and TA, and temperatures in the eight days before harvest from 16 September to 28 October (p > 0.05). The plants continued to produce a marketable crop towards the end of the season, but the fruit were small and more expensive to harvest. Higher temperatures in the future are likely to affect the economics of strawberry production in subtropical locations. View Full-Text
Keywords: climate; cultivar; fruit growth; harvest; strawberry; temperature; yield climate; cultivar; fruit growth; harvest; strawberry; temperature; yield
►▼ Show Figures 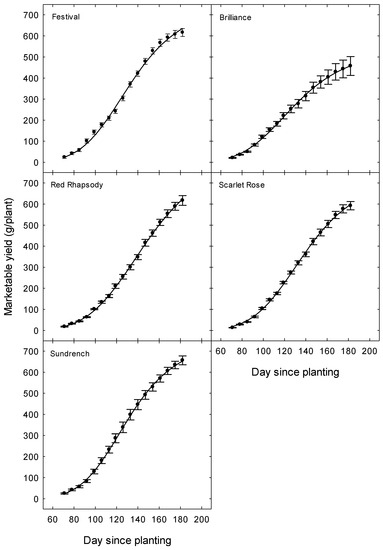