Improving irrigation and fertilization practices is important in the nursery and greenhouse industries to reduce leaching and runoff and to reduce the inputs needed during production. Irrigation and fertilizer applications in container plant production are generally frequent in order to maximize growth [1,2]. Over-irrigation frequently results in the need for additional fertilizer applications during the production cycle because nutrients are leached out of the container. Best management practices (BMPs) suggest a leaching fraction of 10-15% to avoid fertilizer salt buildup in containers [3]. However, it is also possible to reduce fertilizer applications and minimize leaching through more efficient irrigation practices [4].
Plant appearance is important to consumers, with consumers associating appearance with overall plant health [5] and poor plant form or uniformity resulting in reduced sales [6]. Uneven plant growth can be the result of irrigation practices, pruning, or plant growth regulation applications. Over-irrigation, under-irrigation, and poor irrigation uniformity can impact plant growth. Irrigation practices can impact overall plant size, internode length, flower number and size, and leaf size [6,7]. Species-specific information is needed to apply irrigation efficiently and with the most beneficial impact on growth.
Fertilizer BMPs include the use of controlled-release fertilizer which can last the duration of the production cycle along with monitoring substrate nutrient levels by measuring electrical conductivity (EC) during production [8]. Studies have shown that fertilizer applications above an optimum rate can reduce plant quality and growth [9,10].
Previous research has looked at the impact of fertilizer rate or irrigation rate on plant growth [11,12]; however, the effect of reduced irrigation based on plant water use and fertilizer rate on growth and flowering of herbaceous perennial species has not been adequately studied. Research has shown that controlled release fertilizer application rates and irrigation rates have different impacts on various aspects of plant growth and different responses amongst species necessitating species-specific information [4,9,11,12,13].
Flower development is not just important to consumer ornamental appeal of the plant but also to the attractiveness and benefit of pollinators. Abiotic stress from irrigation applications can impact flower trait development and may affect pollinator visitation to those plants [14]. To best support pollinators, it is important to ensure that production practices do not alter flower development to the extent that pollinator visitation decreases. To better understand this the impact of reduced irrigation and fertilizer on flower size and floral features is necessary.
The genus Penstemon has around 250 species with numerous hybrids that are popular in European and North American gardens [15]. Most species and hybrids prefer sunny, dry locations. Winter survival is a challenge in northern areas and the need for well-drained soil is the greatest challenges to Penstemon survival in gardens in the United States and Europe. Penstemon is valued as a landscape plant for its showy flowers. The objective of this research was to quantify the effect of reduced fertilizer rate and irrigation on plant growth and flowering of Ruby Candle beardtongue (Penstemon ‘Ruby Candle’).

Research was conducted in a glass greenhouse at the University of Massachusetts in Amherst, MA, USA from 29 May 2019 to 9 August 2019. Greenhouse air temperature setpoints were 21 °C during the day and 18 °C at night during the experimental period. The greenhouse was set for a 16 h daylength.

Treatment combinations included three fertilizer rates (subplots) of 100% (12 g/plant), 50% (6 g/plant), and 25% of medium bag rate (3 g/plant) and two VWC setpoints (whole plots) 18% or 40% for a total of six treatment combinations. There were two irrigation lines per block to maintain each of the substrate water content setpoints. Two plants receiving each fertilizer rate were on each irrigation line for a total of 6 plants per line and 12 plants per block. Irrigation was controlled using a soil moisture sensor automated irrigation system similar to that described by Nemali and van Iersel [16]. Soil moisture sensors (10HS; Decagon Devices (METER); Pullman, WA, USA) were inserted into the two pots receiving the 100% fertilizer rate for irrigation line for a total of 24 sensors. The sensors were connected to a multiplexer (AM16/32B; Campbell Scientific, Logan, UT, USA) which was connected to a datalogger (CR1000; Campbell Scientific). The datalogger measured sensor voltage output every 60 min. The voltage readings from the sensors were converted to VWC (θ) using our own calibration [θ = − 0.4207 + 0.0009 × output (V)] using the method described by Nemali et al. [17]. When both sensors were below the VWC threshold (40% or 18%), the datalogger signaled a relay driver (SDM16AC/DC controller; Campbell Scientific) to open the proper solenoid valve (Rainbird, Azusa, CA, USA). The solenoid valve was open for 1 min and applied 35 mL of water via drip tubbing connected to pressure-compensated drip emitters (Netafim USA, Fresno, CA, USA). Readings from each sensor were averaged and recorded every 60 min and number of irrigation events per line was recorded daily. Daily and total irrigation volume for a line was calculated from the number of irrigation events and the volume of water applied per irrigation events.
Height and width were measured weekly. Internode length was measured for the longest stem on each plant. Leaf size of ten fully expanded leaves was measured at the conclusion of the experiment using a leaf area meter (LI-3100C; LI-COR, Lincoln, NE, USA). Shoots were cut off at the substrate surface and fresh weight was determined. Relative chlorophyll content was measured using a chlorophyll meter (SPAD 502DL Plus; Konica Minolta, Osaka, Japan). Canopy temperature was measured using an infrared temperature meter (IR Temp Meter, Spectrum Technologies, Inc.; Aurora, IL, USA) at the conclusion of the experiment. Water use efficiency (WUE) was calculated as grams shoot fresh weight/irrigation volume [18]. Inflorescence measurements were taken starting with flower development in July. Inflorescence length and width, number of florets, and weight were measured for individual peduncles along with number of peduncles per plant. A visual rating was made weekly for the final four weeks of the experiment.

Inflorescence measurements including days to flower, inflorescence length, inflorescence internode length, and number of florets were not significantly different (Table 2). Most plants were in flower by day 45. Inflorescence length ranged from 20.4–26.1 cm and inflorescence internode length ranged from 31.5 to 49.9 mm. Number of florets per inflorescence ranged from 9.5 to 13.5.
Alem et al. [9] found that flowering of Petunia × hybrida ‘Dreams White’ was reduced by a combination of high fertilizer rates and high substrate VWC. Maximum flowering occurred at 0.21 to 0.63 g/plant fertilizer and 0.20 VWC threshold. Similarly, James and van Iersel [10] found that flowering of subirrigated petunia and wax begonia (Begonia × semperflorens) increased from a fertilizer EC of 0.15 to 1.8 dS m−1 after which flowering decreased. At seven weeks after transplant, the maximum number of inflorescences for begonia was with a fertilizer rate of 1.6 dS m−1, with the number of inflorescences reduced by 10% or more for plants grown with an EC of less than 0.85 or greater than 2.3 dS m−1. For petunia, the maximum number of flowers was at 2.1 dS m−1, with a 10% of greater reduction in flowers at an EC less than 1.3 or greater than dS m−1.
Number of cut racemes of big bend bluebonnet (Lupinus havardii) was reduced by 35% for plants at 12% and 15% volumetric moisture content (VMC) compared to plants at 20% and 35% VMC [28]. Cai et al. [29] found no difference in flower number for 30% and 40% SMC for Rosa hybrida ‘Radrazz’ and ‘Belinda’s Dream’. For Radrazz flower number was reduced by 27% and 85% for the 20% and 10% SMC and for Belinda’s Dream flower number was reduced by 42% and 75% at 20% and 10% compared to the 30% SMC treatments. Number of flowers for Helenium hybrida ‘Helbro’ (sneezeweed) was greater for plants grown at 40% VWC compared to 20% VWC and there was no difference in flowering of Echinacea purpurea ‘PAS702917′ for plants grown at 25% or 40% VWC [30]. The variability in fertilizer and irrigation treatment on flowering suggests differences in plant water and nutrient requirements, adaptation features, and degree of water stress imposed by the reduced irrigation treatments.

SPAD was greater for the 100% fertilizer rate than the 25% fertilizer rate and not different than the 50% fertilizer rate, with no irrigation effect (Table 3). Alem et al. [9] reported that SPAD readings increased with increasing fertilizer rate, but decreased over the course of the experiment. The effect of fertilizer rate was greatest at low VWC with no difference at the 40% VWC threshold. In contrast to this study, leaf greenness of H. hybrida was greater for plants receiving a RI treatment compared to WW plants but similarly there was no effect of irrigation treatment on SPAD readings of E. purpurea [30]. For H. hybrida, it may be possible that the excessive growth of plants at receiving the WW treatment resulted in depletion of available nutrients in the substrate and subsequently, resulted in lower SPAD readings. Similar to sneezeweed, leaf greenness of big bend bluebonnet was also reduced at lower water contents and the authors postulated that plants at the lower water contents had reached a critical growth stage and began to senesce [28]. Differences in leaf greenness may also be the result of leaf thickness or leaf chlorophyll content [31]. For this study, results may indicate that the 25% fertilizer rate may not have been sufficient to supply adequate nutrients.
As expected, irrigation volume was greater for the WW treatment (40.8 L/plant) than the RI (26.7 L/plant). Visual rating for RI plants (3.9; Figure 1) were greater than the WW plants (3.3; Figure 2), with no effect of fertilizer rate (Table 3). These results are similar to other studies that have reported production of salable plants at reduced irrigation volumes [4,13,20,21,22,23]. Water use efficiency was greater for plants receiving the RI treatment than the WW treatment. This result is similar to that of sneezeweed, which also had greater WUE at RI than WW, but differs from coneflower which was not affected by treatments [30]. These results indicate the RI treatments not only result in water savings, but are beneficial for production and salability of plants.

The results of this research demonstrate the potential for reduced fertilizer applications and reduced irrigation in herbaceous perennial production. Reduced inputs had a significant effect on vegetative plant growth, with fertilizer rate and irrigation level having different impacts on growth. Although RI and reduced fertilizer rates did impact some aspects of vegetative growth, the overall appearance (visual rating) of plants was greater for RI plants with fertilizer rate not impacting the visual rating. Reduced inputs did not impact flowering, which is important for both plant appeal and attractiveness to pollinators. The visual appearance of plants is important for consumer appeal so the improved appearance with reduced inputs shows that not only can reducing inputs improve production but can also increase the appeal to consumers. These results show that, similar to in the landscape, Penstemon perform better in a well-drained substrate that does not remain too wet during production. Improvements in growth of Penstemon hybrids are possible with reduced irrigation practices and appropriate soil/substrate use in production and in the landscape. More research is needed to understand if changes in irrigation or fertilization practices impact other aspects of flower development such as nectar and pollen production. Additional research looking at other genus would provide further information on similarities and differences between genus.

The author wishes to thank Ryan MacMullan for assistance with data collection and project maintenance. 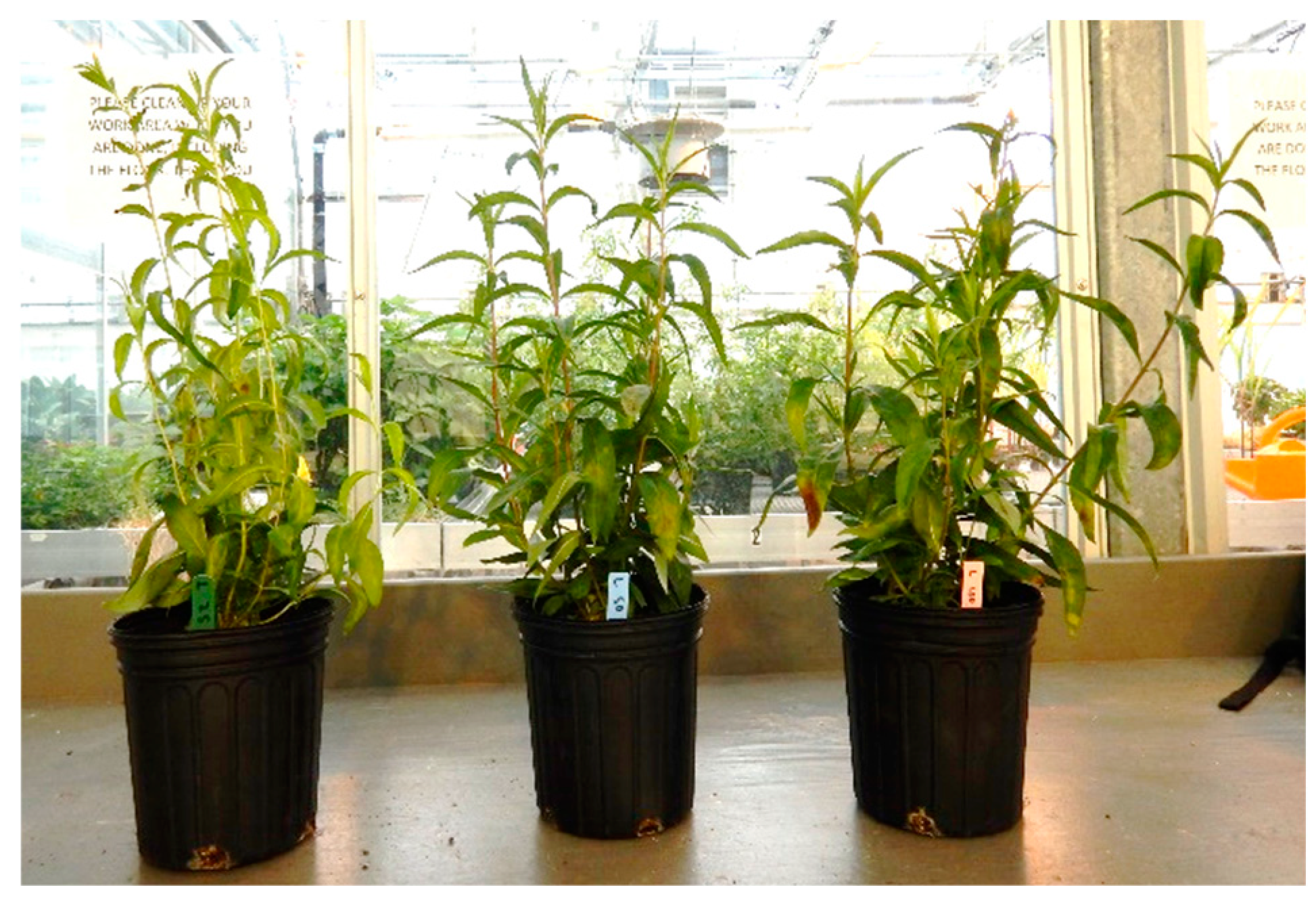