The yield and quality of horticultural crops mainly depend on genotype, environmental conditions, and cultivation management. Abiotic stresses, such as adverse environmental conditions, can strongly reduce crop performance, with crop yield losses ranging from 50% to 70%. The most common abiotic stresses are represented by cold, heat, drought, flooding, salinity, nutrient deficiency, and high and low light intensities, including ultraviolet radiation. These abiotic stresses affect multiple physiological and biochemical processes in plants. The ability of plants to face these stresses depends on their adaptation aptitude, and tolerant plants may express different strategies to adapt to or avoid the negative effects of abiotic stresses. At the physiological level, photosynthetic activity and light-use efficiency of plants may be modulated to enhance tolerance against the stress. At the biochemical level, several antioxidant systems can be activated, and many enzymes may produce stress-related metabolites to help avoid cellular damage, including such compounds as proline, glycine betaine, amino acids, etc. This special issue gathers eight papers; three are reviews and five are research papers. Two reviews are focused on the application of appropriate agronomic strategies for counteracting the negative effects of abiotic stresses. The third review is based on ornamental plant production under drought stress conditions and the effect on their ornamental quality. The research papers report the effect of climate change on crop development, yield, and quality. Abiotic stresses have been proven to reduce crop performance and yield. Research studies are essential for understanding the key adaptation strategies of plants that can be exploited for improving the crop stress tolerance.
Keywords: agronomic tools; dormancy; drought; ornamental; salinity agronomic tools; dormancy; drought; ornamental; salinity

Environmental stresses are the main factor limiting production in agricultural systems. Abiotic stresses, such as adverse environmental conditions, can strongly increase crop yield losses (Figure 1), ranging from 50% to 70% [1]. Climate change is often mentioned as one of the future challenges that the agricultural sector must face. An increase in temperature is considered the crucial factor that will reduce water quantity and quality. The availability of this natural resource affects the lives of human beings, as well as agricultural yields. Fresh water is an essential resource for ecosystems and humanity. The use of water is under increasing pressure in many parts of the word, particularly for agriculture, which is by far the largest water-use sector, accounting for around 70% of the water withdrawal worldwide [2]. Climate change requires a more sustainable management of water resources. However, in several agricultural areas, excessive rain can also induce flooding, with negative effects on crop development and production. In these areas it is important to select suitable crops and control soil water though appropriate agronomic management strategies.
Besides high temperatures, low temperatures can also represent a problem for many macrothermal species that are grown in spring, or fruit trees that have their bloom period in the early spring (such as peaches or almonds). Cold stress can induce chilling injury and damage flowers or leaves with subsequent significant yield losses.
High or low irradiance can also have direct impacts on crop biomass and produce quality since photosynthesis and respiration are tightly correlated with temperature, light intensity, and quality.
Inadequate crop nutrition can induce excesses or lack of some essential elements, with effects on growth, yield, or quality of the produce depending on the species. The excess of heavy metals or xenobiotic compounds can also represent a limiting factor in different urban and agricultural areas. This special issue collects state of the art studies of the effects of abiotic stresses on agricultural crops and ornamental plants in Mediterranean areas. In particular, a compendium of agronomic strategies has been described and re-evaluated for improving crop tolerance in the short term [3,4].

The agricultural market is constantly oriented to produce the most common crops year-round, or to exploit the lower market availability of some products in early spring or late winter for getting the highest prices. The out-of-season production is often performed in greenhouses and requires high energy consumption. Therefore, suboptimal temperatures or light conditions can represent important factors to manage for avoiding crop damage and excessive production costs. Experimental work was performed in bedding plant production in greenhouses during winter, with exposure to low-energy conditions characterized by reduced temperature and light conditions for a two-week period over a growing cycle of eight weeks. Results showed negative effects on flowering and plant growth by the addition of a two-week low-energy exposure. In particular, flowering was delayed, and reductions in flower number, plant size, and biomass were observed. The most affected crops where those that were cold-sensitive, such as impatiens [5]. Further, studies should be carried out on cold tolerant species and in non-flowering species.
Environmental parameters have direct effects on crop performance in different seasons and different nutrient availability. Cultivation carried out with two different lettuce cultivars in different seasons and with different nutrient availabilities showed that suboptimal growing conditions limit nutrient utilization and have effects on biomass accumulation. Secondary metabolites, which can contribute to the antioxidant capacity of lettuce, were affected by the seasons by effects on both composition of different flavonoids and in their total concentrations [6]. Considering the overall results, higher nutrient solution concentrations should be used in spring for maximizing yield and quality in lettuce.
The yield of crops is directly correlated with photosynthesis and the main factors involved in this physiological process. Water is an essential element of photosynthesis, and its availability can be directly correlated with yield and quality. Prediction models have been developed for estimating yield in different stress conditions. In this special issue, a prediction model based on evapotranspiration has been used for estimating the yield of apple under water deficit conditions [7]. The model was studied for apple yield estimation under three cultivation regimens: conventional irrigation, partial root zone drying, and continuous deficit irrigation. Results showed that the model worked well for vigorous cultivars such as ‘Fuji’, while it did not perform well for cultivars like ‘Gala’ that are not able to limit water losses by closing stomates. In pepper, it was demonstrated that salinity and water availability affected the yield and quality at harvest and during postharvest storage [8].
The adaptation of crops to stressful conditions can be achieved through the selection of a suitable genotype with specific traits. Genetic improvement programs can be used for enhancing tolerance to the different stresses, but require long periods of work. In the short term, agronomic strategies can be adopted for reducing stress intensity to the crops. A compendium of old and new agronomic tools has been reported in this special issue. For each stress, specific agronomic strategies have been described for lowering their negative effects and allow crops to cope with the stressful conditions [3,4].

Abiotic stresses may also be utilized in some species for synchronization with the seasonal change. In many fruit tree species, cold stress and the accumulation of cold units are essential for bud differentiation. In this special issue endodormancy of almond and a putative regulatory gene, the Dormancy Associated MADS-Box (DAM), has been studied [9]. Since it is well known that temperature trends affect bud dormancy, in this study the expression of PdDAM6 was compared in warmer and colder seasons. Results indicated that the endodormancy to ecodormancy transition involved a transcriptional reprogramming, in which genes acting on dormancy maintenance would be downregulated. In almond, the expression of PdDAM6 seemed to play a crucial role.

The quality of ornamental plants depends on their visual appearance, which is defined by such factors as leaf color, size, number, and longevity. Abiotic stresses and in particular drought stress can severely affect leaf morphology and physiology during adaptation to stressful environments. These responses can have a direct impact on ornamental quality and subsequently on the commercial value of the plants. A review included in this special issue describes the physiological, biochemical, and morphological changes that ornamental plants can undergo under drought stress, and how these influence quality [10]. The most common changes that can be observed on leaves are smaller size and their orientation on the branch. Ornamental plant drought stress responses are important for their selection in relationship to their area of utilization, such as urban or peri-urban areas.

Abiotic stresses have been proven to reduce crop performance and yield. However, mild stresses can also have positive effects on the quality of produce, especially through the activation of the phenylpropanoid pathway and the accumulation of bioactive compounds. These can improve postharvest performance and enhance the nutritional quality of the produce, which is particularly important for the consumer.
Abiotic stresses must be continuously studied with multidisciplinary approaches, from the basic science for understanding crop responses, and their adaptation to the identification of practical agronomic solutions for alleviating the stressful effects and preserving crop productivity.

We gratefully acknowledge all the Authors that participate to this Special Issues. 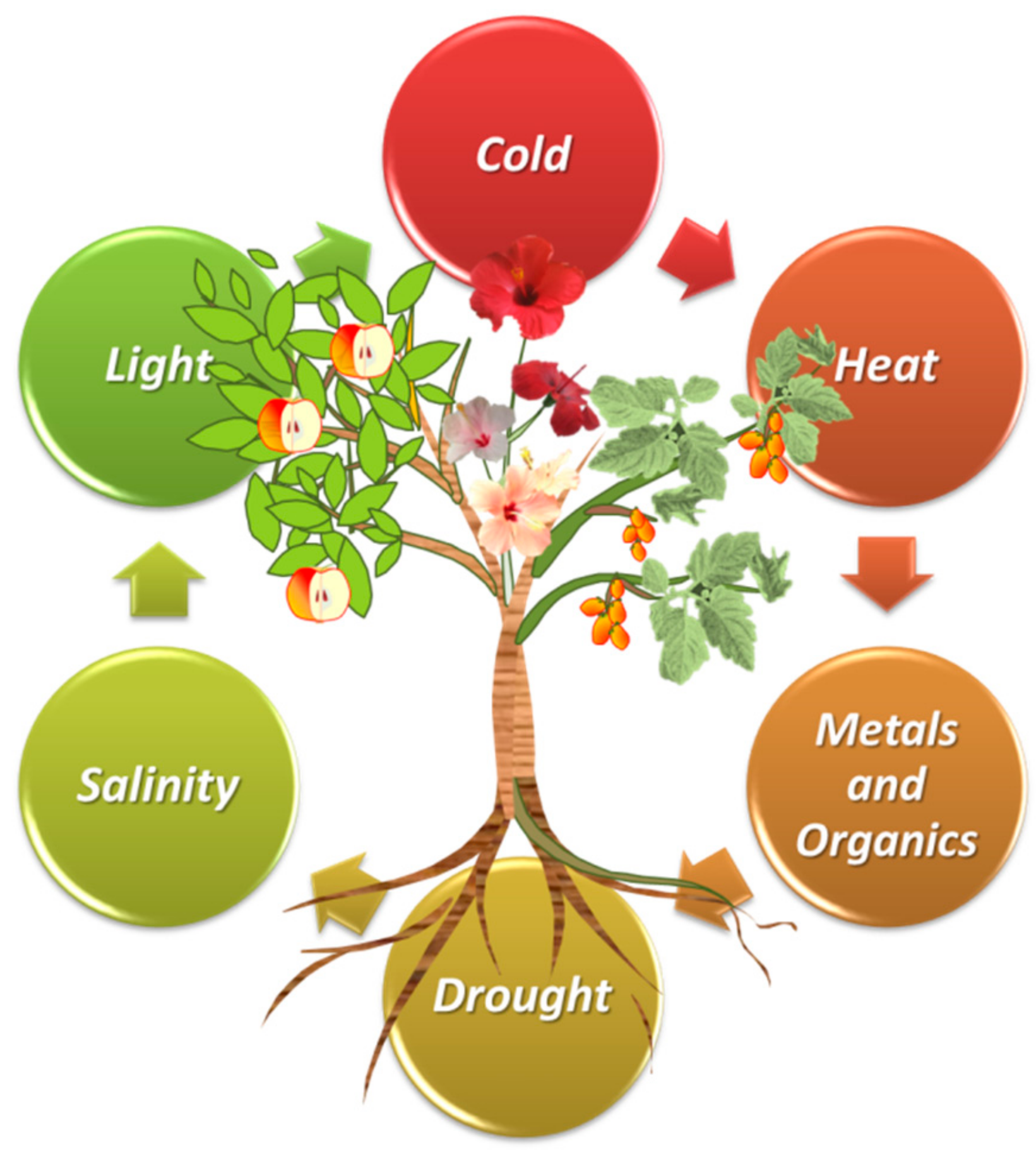