The study and use of non-Saccharomyces yeasts to wine improvement and diversification has gained considerable relevance in recent years. The present work reports a pilot-scale winery assay of mixed fermentation with a commercial strain of Metschnikowia pulcherrima, tested in five white and nine red grape varieties. Two modalities were assayed, one with the addition of M. pulcherrima at time zero and addition of Saccharomyces cerevisiae after 24 h, and a control using only S. cerevisiae at time zero. Fermentation was monitored by daily measurement of density and temperature. Wine physicochemical analysis was performed after winemaking and repeated after four years of aging. Variance and multivariate analysis were used to examine these data. Triangle and ranking tests were performed on the wines obtained, using an experienced sensory panel. Alcoholic fermentation proceeded smoothly until there was complete consumption of the sugars. M. pulcherrima in mixed fermentation, although mainly recommended for white wine, was also tested for red wines. These wines generally presented higher glycerol, reducing sugars and total dry matter, and lower alcohol content, in line with the current market trend. Significant sensory differences among modalities were only obtained for three varieties. Results emphasized that grape variety is a relevant factor in studies with non-Saccharomyces yeasts. View Full-Text
Keywords: mixed fermentations; Metschnikowia pulcherrima; wine; grape variety; sensory analysis mixed fermentations; Metschnikowia pulcherrima; wine; grape variety; sensory analysis
►▼ Show Figures 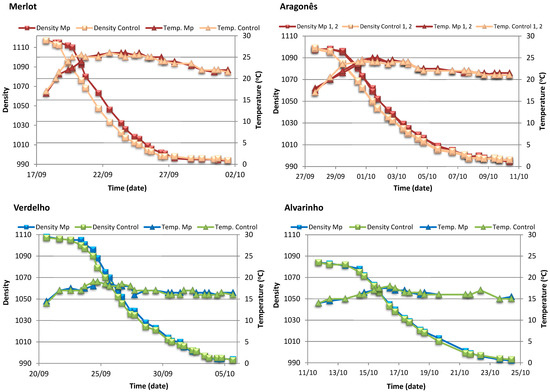