How Does a Tumor Get Its Shape? MicroRNAs Act as Morphogens at the Cancer Invasion Front
Previous Article in Journal

The mammalian genome is pervasively transcribed and the functional significance of many long non-coding RNA (lncRNA) transcripts are gradually being elucidated. Metastasis Associated Lung Adenocarcinoma Transcript 1 (MALAT1) is one of the most well-studied lncRNAs. MALAT1 is a highly conserved nuclear retained lncRNA that is abundantly expressed in cells and tissues and has been shown to play a role in regulating genes at both the transcriptional and post-transcriptional levels in a context-dependent manner. However, Malat1 has been shown to be dispensable for normal development and viability in mice. Interestingly, accumulating evidence suggests that MALAT1 plays an important role in numerous diseases including cancer. Here, we discuss the current state-of-knowledge in regard to MALAT1 with respect to its function, role in diseases, and the potential therapeutic opportunities for targeting MALAT1 using antisense oligonucleotides and small molecules. View Full-Text
Keywords: lncRNA; MALAT1; pre-mRNA splicing; non-coding RNA lncRNA; MALAT1; pre-mRNA splicing; non-coding RNA
►▼ Show Figures 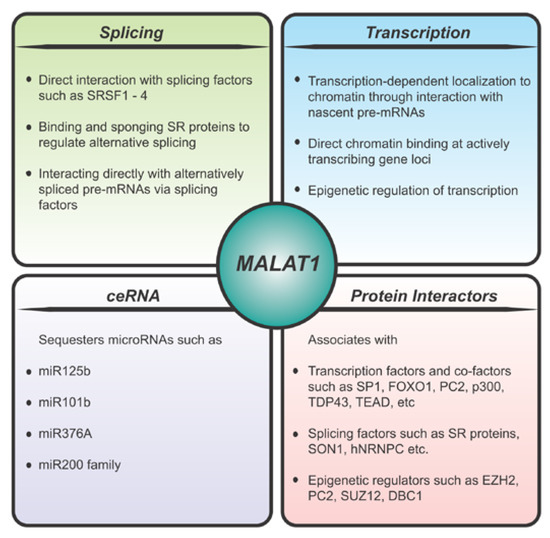