Biogenesis, Stabilization, and Transport of microRNAs in Kidney Health and Disease

Management of chronic diabetic complications remains a major medical challenge worldwide. One of the characteristic features of all chronic diabetic complications is augmented production of extracellular matrix (ECM) proteins. Such ECM proteins are deposited in all tissues affected by chronic complications, ultimately causing organ damage and dysfunction. A contributing factor to this pathogenetic process is glucose-induced endothelial damage, which involves phenotypic transformation of endothelial cells (ECs). This phenotypic transition of ECs, from a quiescent state to an activated dysfunctional state, can be mediated through alterations in the synthesis of cellular proteins. In this review, we discussed the roles of non-coding RNAs, specifically microRNAs (miRNAs) and long non-coding RNAs (lncRNAs), in such processes. We further outlined other epigenetic mechanisms regulating the biogenesis and/or function of non-coding RNAs. Overall, we believe that better understanding of such molecular processes may lead to the development of novel biomarkers and therapeutic strategies in the future. View Full-Text
Keywords: diabetic complications; epigenetics; lncRNAs; histone modifications; miRNAs; ECM alterations diabetic complications; epigenetics; lncRNAs; histone modifications; miRNAs; ECM alterations
►▼ Show Figures 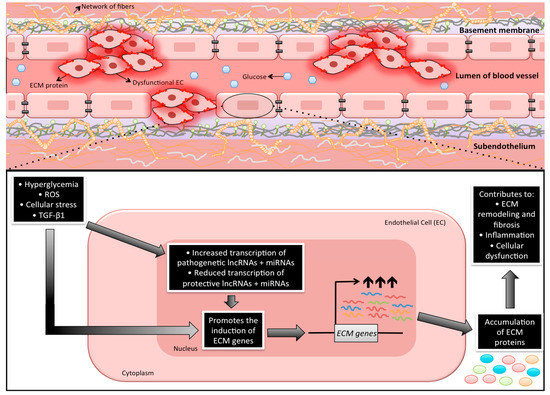