Diabetes in Pregnancy and MicroRNAs: Promises and Limitations in Their Clinical Application

Henrik B. Mortensen 1,4 and

Circulating microRNAs (miRNAs) have been implicated in several pathologies including type 1 diabetes. In the present study, we aimed to identify circulating miRNAs affected by disease duration in children with recent onset type 1 diabetes. Forty children and adolescents from the Danish Remission Phase Cohort were followed with blood samples drawn at 1, 3, 6, 12, and 60 months after diagnosis. Pancreatic autoantibodies were measured at each visit. Cytokines were measured only the first year. miRNA expression profiling was performed by RT-qPCR. The effect of disease duration was analyzed by mixed models for repeated measurements adjusted for sex and age. Eight miRNAs (hsa-miR-10b-5p, hsa-miR-17-5p, hsa-miR-30e-5p, hsa-miR-93-5p, hsa-miR-99a-5p, hsa-miR-125b-5p, hsa-miR-423-3p, and hsa-miR-497-5p) were found to significantly change in expression (adjusted p-value < 0.05) with disease progression. Three pancreatic autoantibodies, ICA, IA-2A, and GAD65A, and four cytokines, IL-4, IL-10, IL-21, and IL-22, were associated with the miRNAs at different time points. Pathway analysis revealed associations with various immune-mediated signaling pathways. Eight miRNAs that were involved in immunological pathways changed expression levels during the first five years after diagnosis and were associated with variations in cytokine and pancreatic antibodies, suggesting a possible effect on the immunological processes in the early phase of the disease. View Full-Text
Keywords: children; immunology; miRNA; partial remission phase; type 1 diabetes children; immunology; miRNA; partial remission phase; type 1 diabetes
►▼ Show Figures 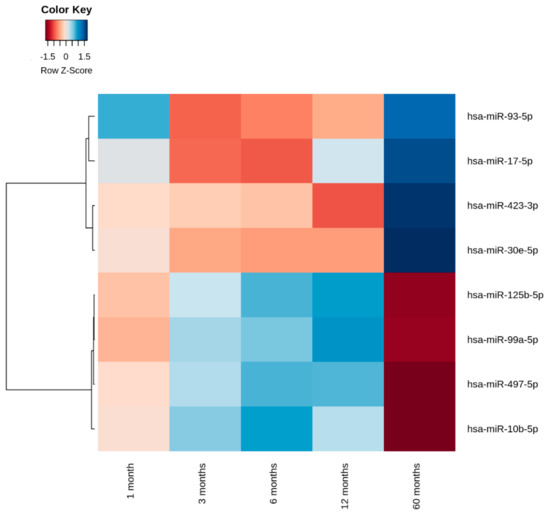