In this paper, the rheological behaviour of a petroleum-based epoxy (EL2 laminating epoxy) was compared with the Super Sap CLR clear bio-resin epoxy. The focus of the work was on the viscous and viscoelastic performance of these epoxy resins. Rheological tests were carried out at 15, 30, and 60 min after the mixing of the pure epoxies and the hardeners at a constant temperature of 25 °C. The results obtained from the rheometer tests showed that the viscosity of both epoxy systems decreased with increasing shear rate, which is typical behaviour of a shear thinning fluid. Regarding the oscillatory rheology tests, the viscoelastic properties of both epoxy resins were studied within their linear viscoelastic region (LVER) by amplitude sweep test, which was also carried out 15, 30, and 60 min after mixing the epoxies with the hardeners. It was noticed that the petroleum-based epoxy possessed a more significant LVER relative to the bio-based resin. Finally, the storage modulus (G′), the loss modulus (G″), and the phase angle were extracted, and these parameters were investigated over low and high frequencies. From the test results, we observed that both epoxy resins showed a liquid-like viscoelastic behaviour due to their phase angle values, which were always between 45° and 90°, and by the general tendency of the G″ predominance over G′ at low and high frequencies. View Full-Text
Keywords: bio-based epoxy; rheology; green composite; ecocomposite; aerospace industry bio-based epoxy; rheology; green composite; ecocomposite; aerospace industry
►▼ Show Figures 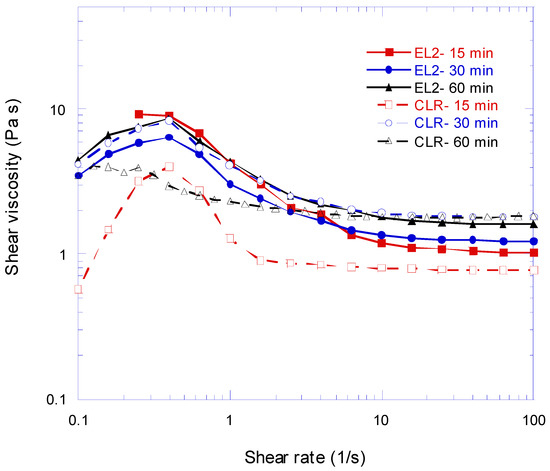