Impact of Longitudinal Acceleration and Deceleration on Bluff Body Wakes

Statistical Structure and Deviations from Equilibrium in Wavy Channel Turbulence

The structure of turbulent flow over non-flat surfaces is a topic of major interest in practical applications in both engineering and geophysical settings. A lot of work has been done in the fully rough regime at high Reynolds numbers where the effect on the outer layer turbulence structure and the resulting friction drag is well documented. It turns out that surface topology plays a significant role on the flow drag especially in the transitional roughness regime and therefore, is hard to characterize. Survey of literature shows that roughness function depends on the interaction of roughness height, flow Reynolds number, and topology shape. In addition, if the surface topology contains large enough scales then it can impact the outer layer dynamics and in turn modulate the total frictional force. Therefore, it is important to understand the mechanisms underlying drag increase from systematically varied surface undulations in order to better interpret quantifications based on mean statistics such as roughness function. In this study, we explore the mechanisms that modulate the turbulence structure over a two-dimensional (2D) sinusoidal wavy surface with a fixed amplitude, but varying slopes that are sufficiently small to generate only intermittent flow separation. To accomplish this, we perform a set of highly resolved direct numerical simulations (DNS) to model the turbulent flow between two infinitely wide 2D wavy plates at a friction Reynolds number, , which represents modest scale separation. We pursue two different but related flavors of analysis. The first one adopts a roughness characterization flavor of such wavy surfaces. The second one focuses on understanding the nonequilibrium near-surface turbulence structure and their impact on roughness characterization. Analysis of the different statistical quantifications show strong dependence on wave slope for the roughness function indicating drag increase due to enhanced turbulent stresses resulting from increased production of vertical velocity variance from the surface undulations. View Full-Text
Keywords: roughness; wall turbulence; direct numerical simulation; wavy surface roughness; wall turbulence; direct numerical simulation; wavy surface
►▼ Show Figures 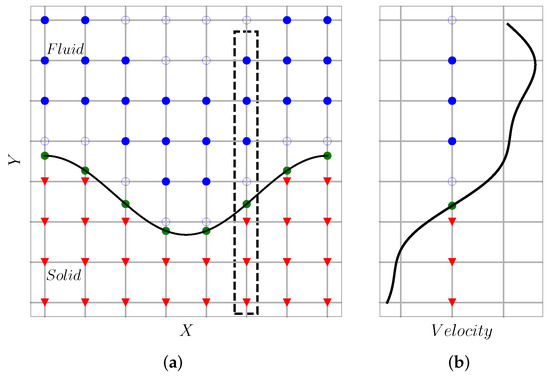