The effects of Lewis number on the physical mechanisms pertinent to the curvature evolution have been investigated using three-dimensional Direct Numerical Simulation (DNS) of spherically expanding turbulent premixed flames with characteristic Lewis number of , 1.0 and 1.2. It has been found that the overall burning rate and the extent of flame wrinkling increase with decreasing Lewis number , and this tendency is particularly prevalent for the sub-unity Lewis number (e.g., ) case due to the occurrence of the thermo-diffusive instability. Accordingly, the case has been found to exhibit higher probability of finding saddle topologies with large magnitude negative curvatures in comparison to the corresponding and 1.2 cases. It has been found that the terms in the curvature transport equation due to normal strain rate gradients and curl of vorticity arising from both fluid flow and flame normal propagation play pivotal roles in the curvature evolution in all cases considered here. The net contribution of the source/sink terms of the curvature transport equation tends to increase the concavity and convexity of the flame surface in the negatively and positively curved locations, respectively for the case. This along with the occurrence of high and low temperature (and burning rate) values at the positively and negatively curved zones, respectively acts to augment positive and negative curved wrinkles induced by turbulence in the case, which is indicative of thermo-diffusive instability. By contrast, flame propagation effects tend to weakly promote the concavity of the negatively curved cusps, and act to decrease the convexity of the highly positively curved bulges in the and 1.2 cases, which are eventually smoothed out due to high and low values of displacement speed at negatively and positively curved locations, respectively. Thus, flame propagation tends to smoothen the flame surface in the and 1.2 cases. View Full-Text
Keywords: Lewis number; flame curvature; iso-scalar non-material surfaces; turbulent premixed spherical flame Lewis number; flame curvature; iso-scalar non-material surfaces; turbulent premixed spherical flame
►▼ Show Figures 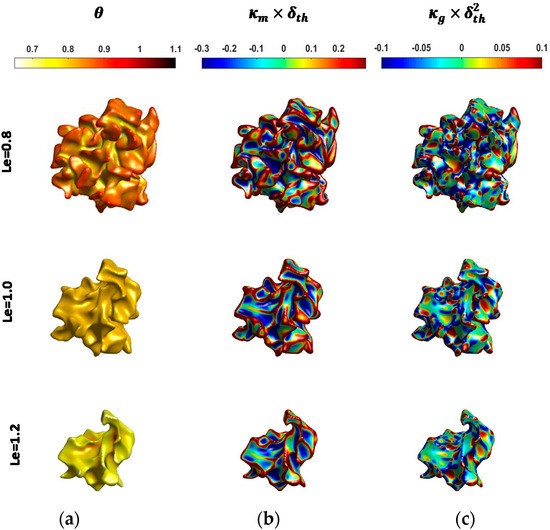