Baseline Model for Bubbly Flows: Simulation of Monodisperse Flow in Pipes of Different Diameters
Next Article in Special Issue

Diapycnal Velocity in the Double-Diffusive Thermocline

2.1. Kinematics of a Residual Scalar Flux

As a first example, we consider the classical initial-value problem of viscous adjustment of an impulsively started uniform flow u = U and v = 0 in the upper (x, y) plane, bounded by a no-slip, flat plate at y = 0. The x-velocity u is determined entirely by the x-momentum equation, which takes the form of a heat equation: with initial and boundary conditions
For t > 0 the fluid at y = 0 is immediately brought to a halt and the fluid above the boundary is decelerated towards rest by a viscous layer of increasing thickness. The solution is given by and the corresponding vorticity and its derivative are
Now suppose that one is interested in the scalar flux of vorticity, which is introduced into the initially irrotational fluid at the boundary at y = 0. The flow is laminar and there is no need to perform the time averaging over turbulent scales, so we seek a conservation law of the form of Equation (2). This is easily obtained through differentiation of Equation (16) with respect to y, resulting in
In terms of Equation (2) we have C = ζ, , and therefore, with the final step following from substitution of the solution Equation (18).
The trajectories of are obtained from or x* = const. and y* = at1/2. One may now trace any contour y* = y*(x*,t) that evolves under Equation (21), an obvious first choice being the parallel contours y* = at1/2 parameterized by a, with . Note that the movement of the contours is independent of viscosity. All such contours initially lie at boundary (y = 0), but they explode into the fluid at t = 0+ and migrate towards positive y thereafter (Figure 10). The infinite speed of the leading contour is simply a reflection of the property of solutions to the parabolic equation, in which a sudden change at a boundary has an immediate impact at all finite distances from the boundary. The distance between any two contours a1 and a2 grows in proportion to t1/2 while the total amount of vorticity between the two remains constant. Thus, the vorticity moves away from the boundary and is diluted as it does so. Alternatively, one could have chosen a more complex contour, perhaps a circle, and seen that it becomes elongated in the y-direction as t increases.
It is also instructive to compute the rate at which enstrophy V = ζ2/2 moves into the fluid. Multiplication of Equation (20) by ζ results, after some rearrangement, in so that now C = V, , and
Therefore, enstrophy moves into the domain at twice the speed of vorticity, but is dissipated as it does so.
Similar calculations can be done with momentum u and kinetic energy u2/2, resulting in the observation that energy moves twice as fast as momentum but is subject to a dissipation that momentum does not feel. In addition, v* < 0 for both scalars, so that the contours of zero flux move towards the boundary (which acts both as a sink of momentum and energy, but a source of vorticity and enstrophy).

2.3. A Turbulent Model of the Antarctic Circumpolar Current

Readers may consult [46] for a description of the numerical model used to produce the results in Section 3.3.

The above examples are just an introduction to what may be a fruitful diagnostic that could help one understand scalar fluxes in complex flows through extension of the concept of a Lagrangian barrier to non-Lagrangian trajectories, and through the use of filtering in time. Though promising, the approach raises significant technical and interpretative challenges. For one thing, the residual velocity field is generally divergent/convergent (or “non-divergence free”, as one colleague likes to say) and, for simulations that resolve the ocean submesoscale, substantially 3D. The zoology of fixed points is thus considerably richer than in two-dimensional, incompressible flows and the assumptions that underpin the concepts of manifolds and Lagrangian coherent structures may have to be rethought. There is hope that this aspect might attract the attention of talented mathematicians.
A question that always arises in connection with the methodology is how to resolve the nonuniqueness of the flux vector. In some cases, boundary or initial conditions may be informative. For example, we could have added a nondivergent buoyancy flux in the cross-channel direction to the flux vector in Equation (27), but this would have violated the condition of zero buoyancy flux through the channel sidewalls. In cases where uncertainty remains, one may find it helpful to carefully consider the scientific question that led to consideration of the property flux in the first place. In our example with buoyancy flux, our primary interest is in cross-channel (y) transport. Alternatively, we could have added to our a y-dependent flux in the x-direction without altering Equation (27) and without violating any boundary conditions. This would have augmented the along-channel component of , which would have changed the way that contours are advected but it wouldn’t alter the conclusions about cross-channel transport. In fact, there may be instances in which such augmentation may be used to computational advantage. If the x-component of the original is highly sheared, for example, advected contours will rapidly stretch and filament. It may be desirable to remove this feature by subtracting a non-divergent flux vector that removes much of the shear.
In some applications the source/sink term (S in Equation (2)) may be sufficiently large that it dominates the evolution of the tracer. This situation could occur, for example, for nutrient limited biological scalars. In this case, the tracking of the transport barriers for the scalar flux may not be particularly helpful. Fortunately, there are cases in which S may be written as the divergence of a flux and absorbed in to the scalar flux vector F.
Our approach also attempts to achieve simplification through time filtering. (One could further smooth by filtering in space, but we have not gone this route.) The result is a relation (Equation (12)) guaranteeing that in the absence of sources and sinks, the total amount of time filtered scalar concentration will be conserved within moving barriers computed from the residual velocity field. (A similar assumption holds for any system that involves Reynolds time averaging over turbulent scales.) The interpretation of the results of time filtering may depend on the width T of the filter window: in our study T was chosen to be large enough to smooth the finest scales but not so large that the gyre and jet meanders were smoothed.

The authors are grateful for support through DOD (MURI) Grant N000141110087, administered by the Office of Naval Research. We also thank two reviewers for thoughtful suggestions and George Haller for pointing out the result listed at the end of Section 2.1. 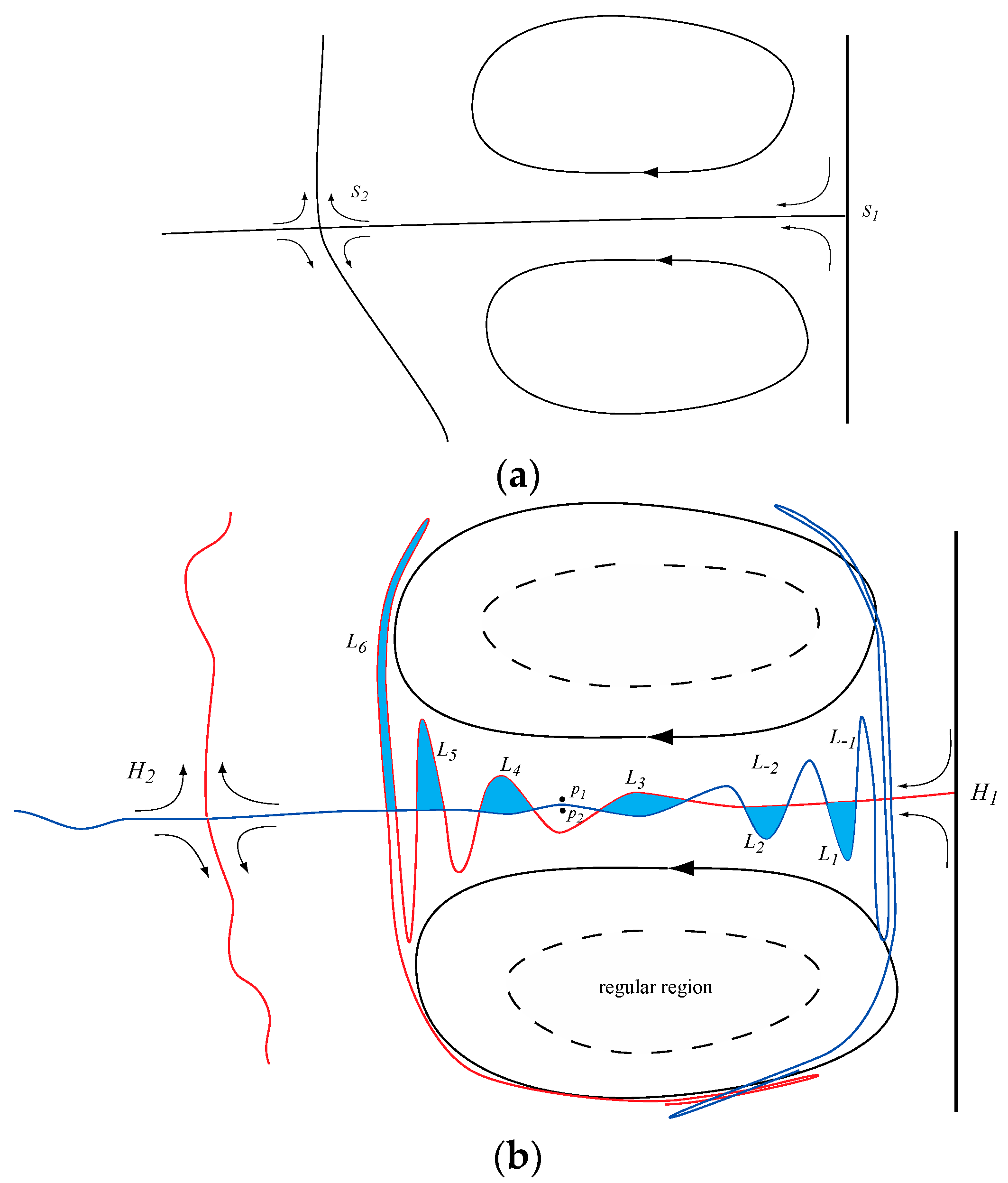 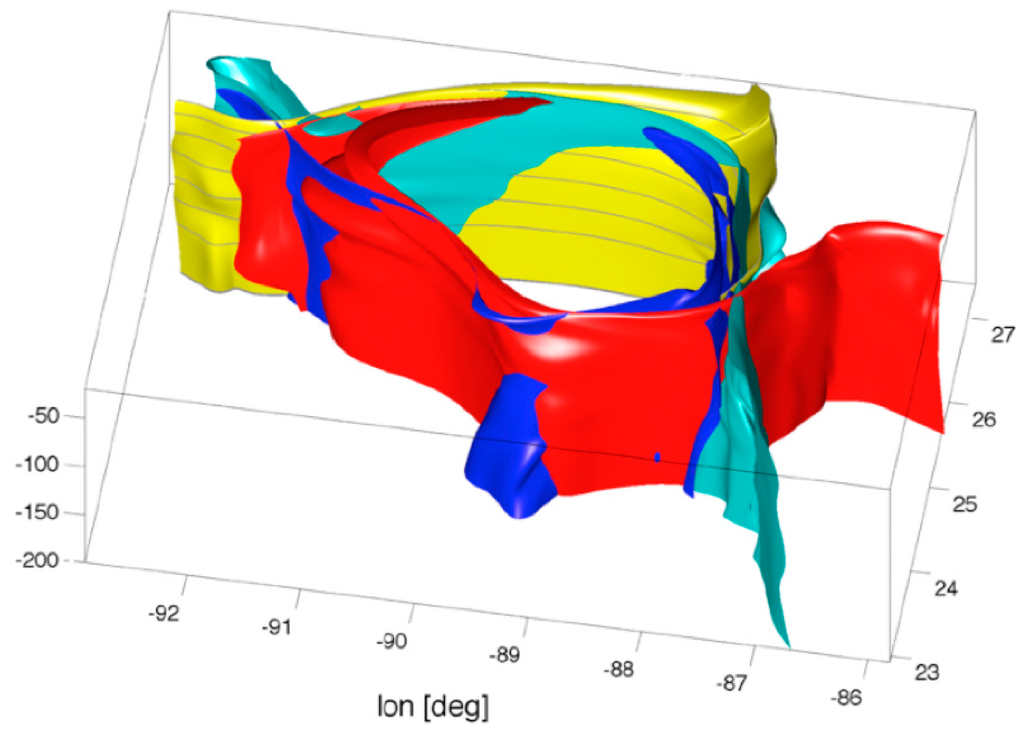 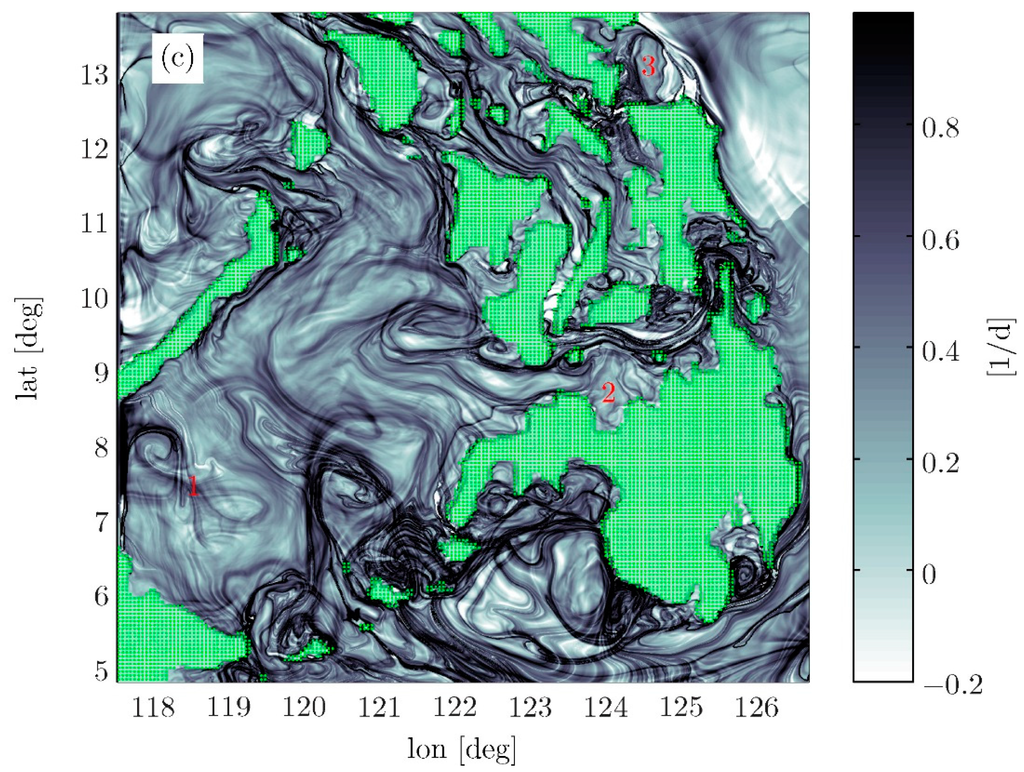 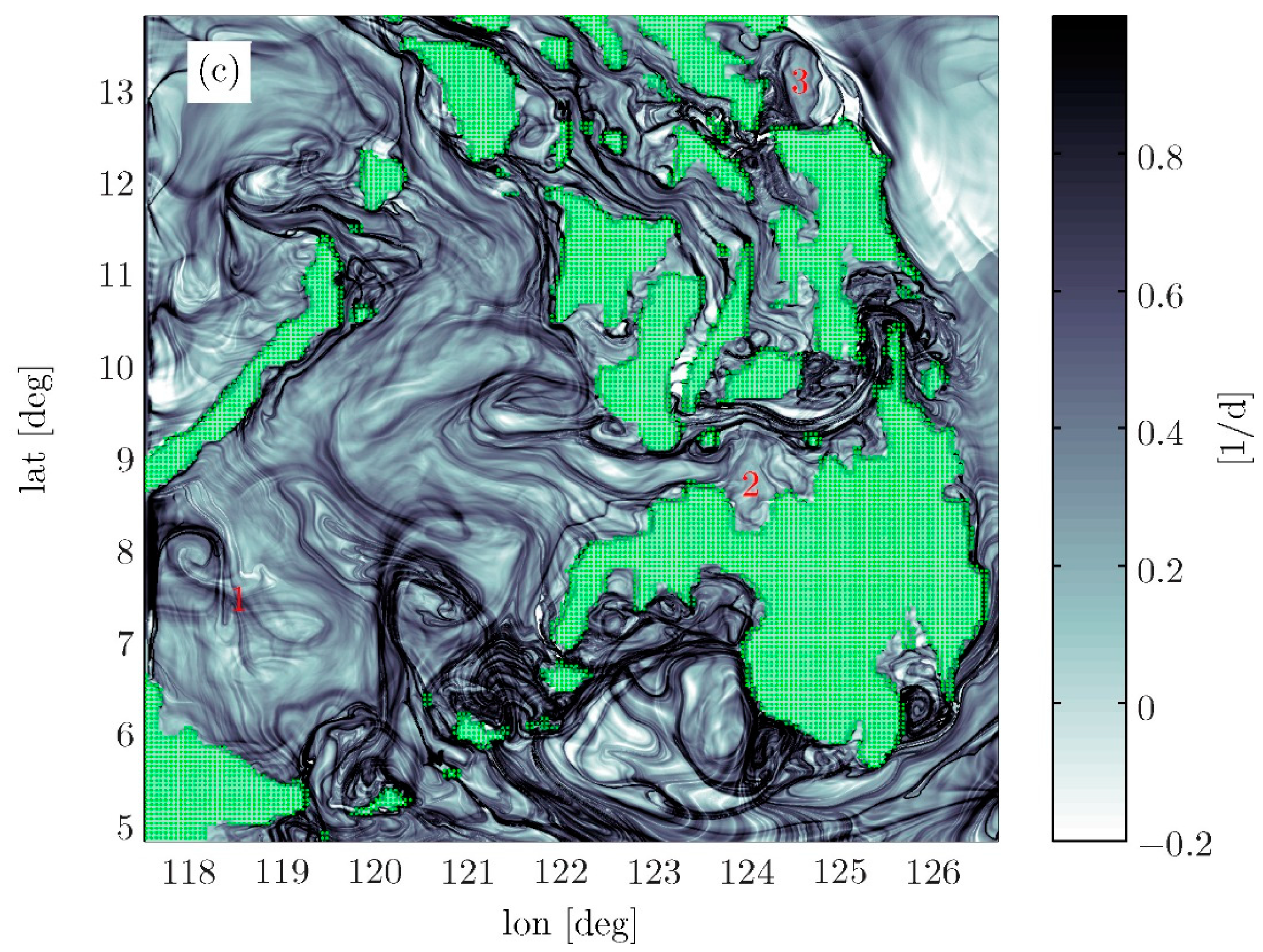 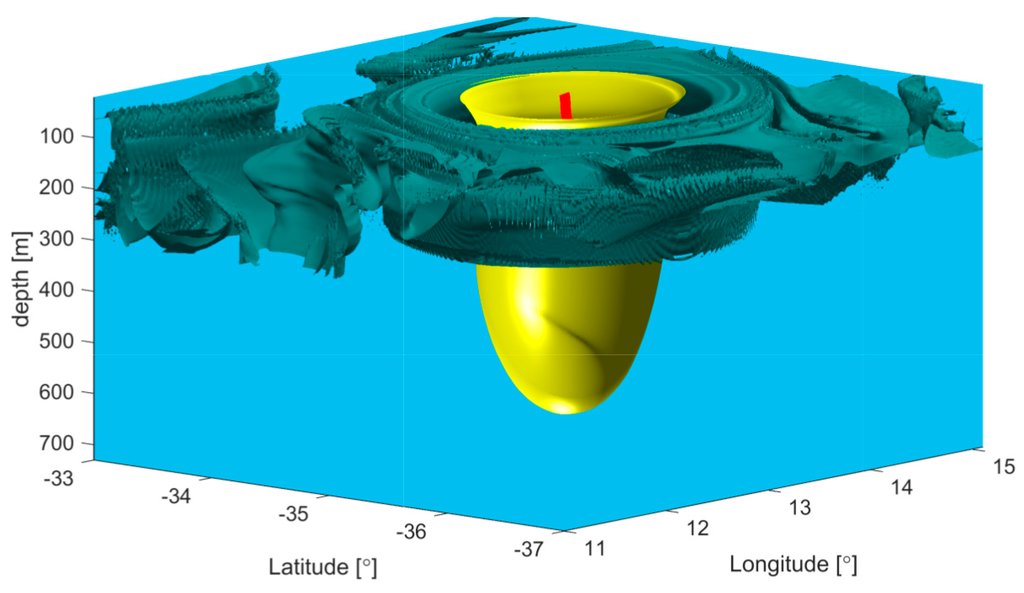 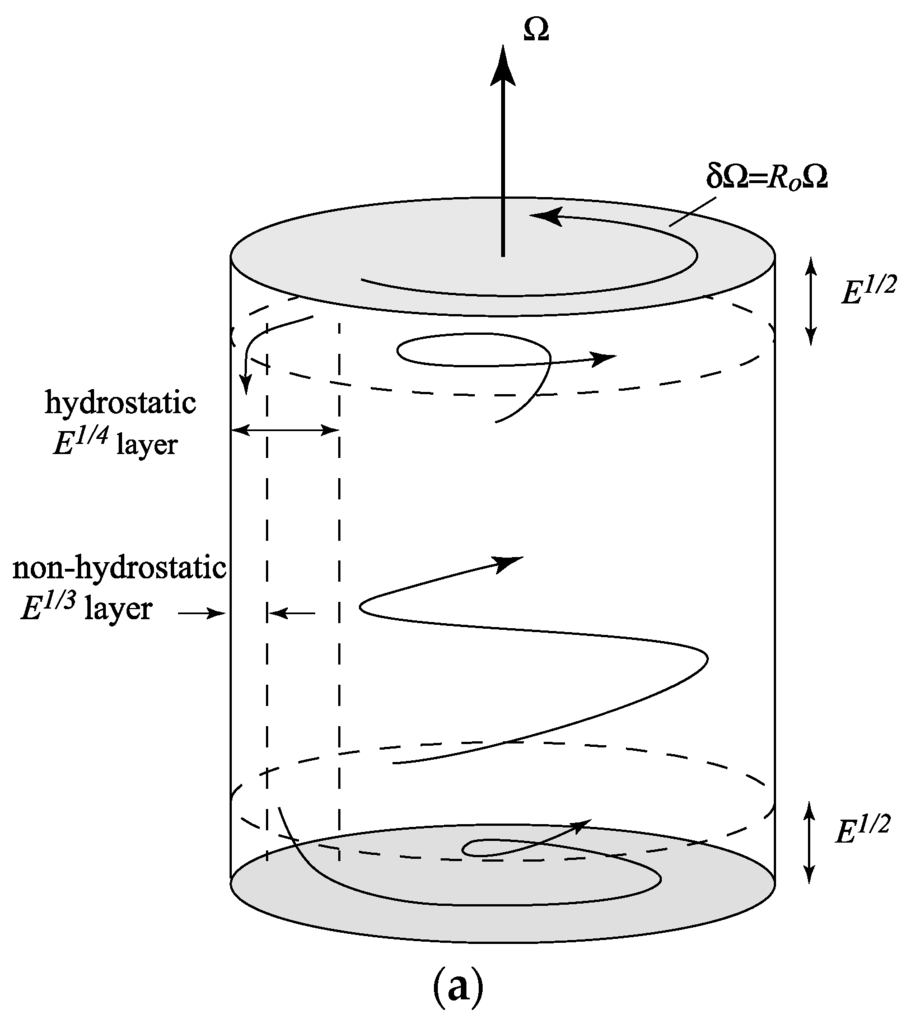 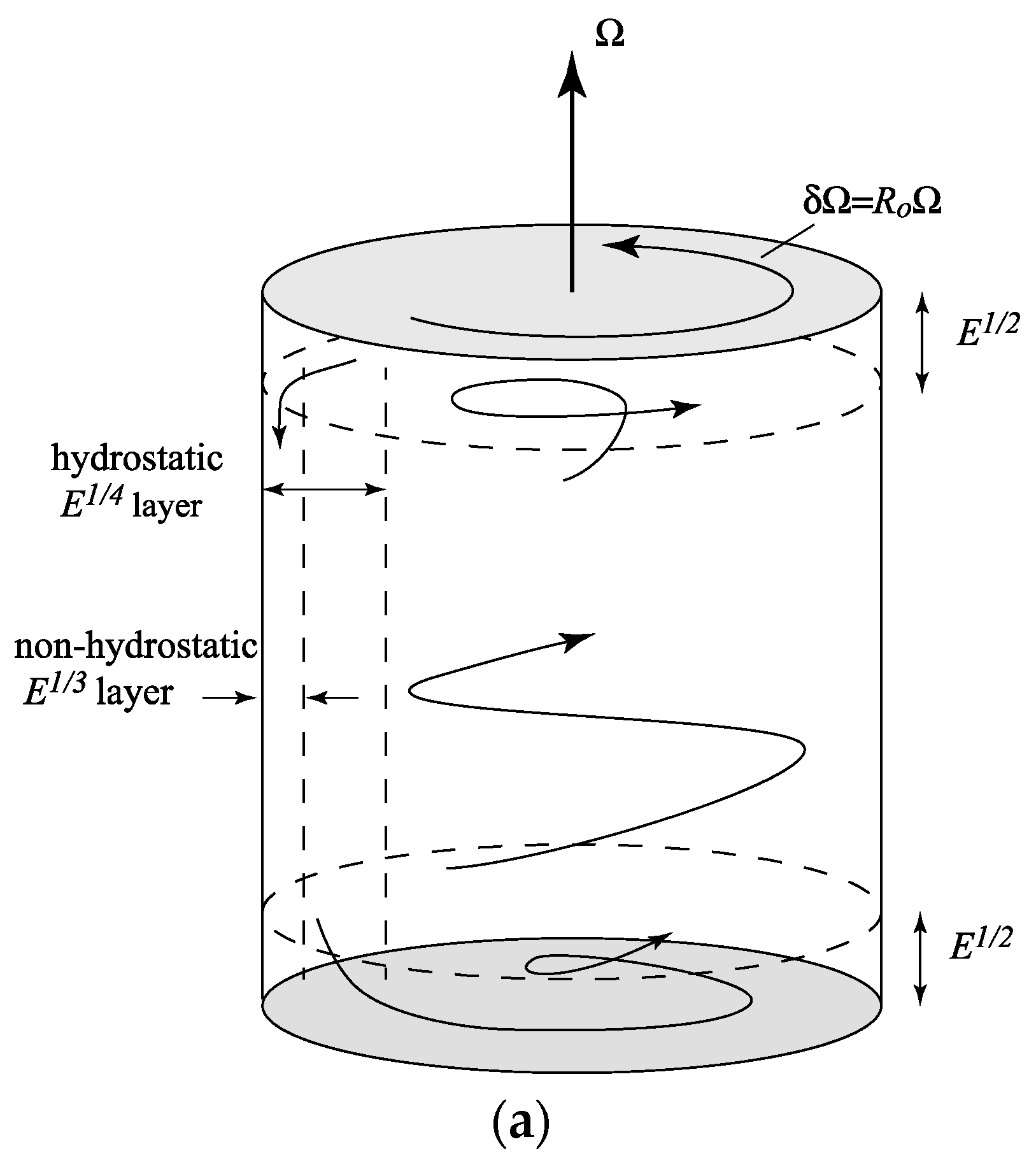 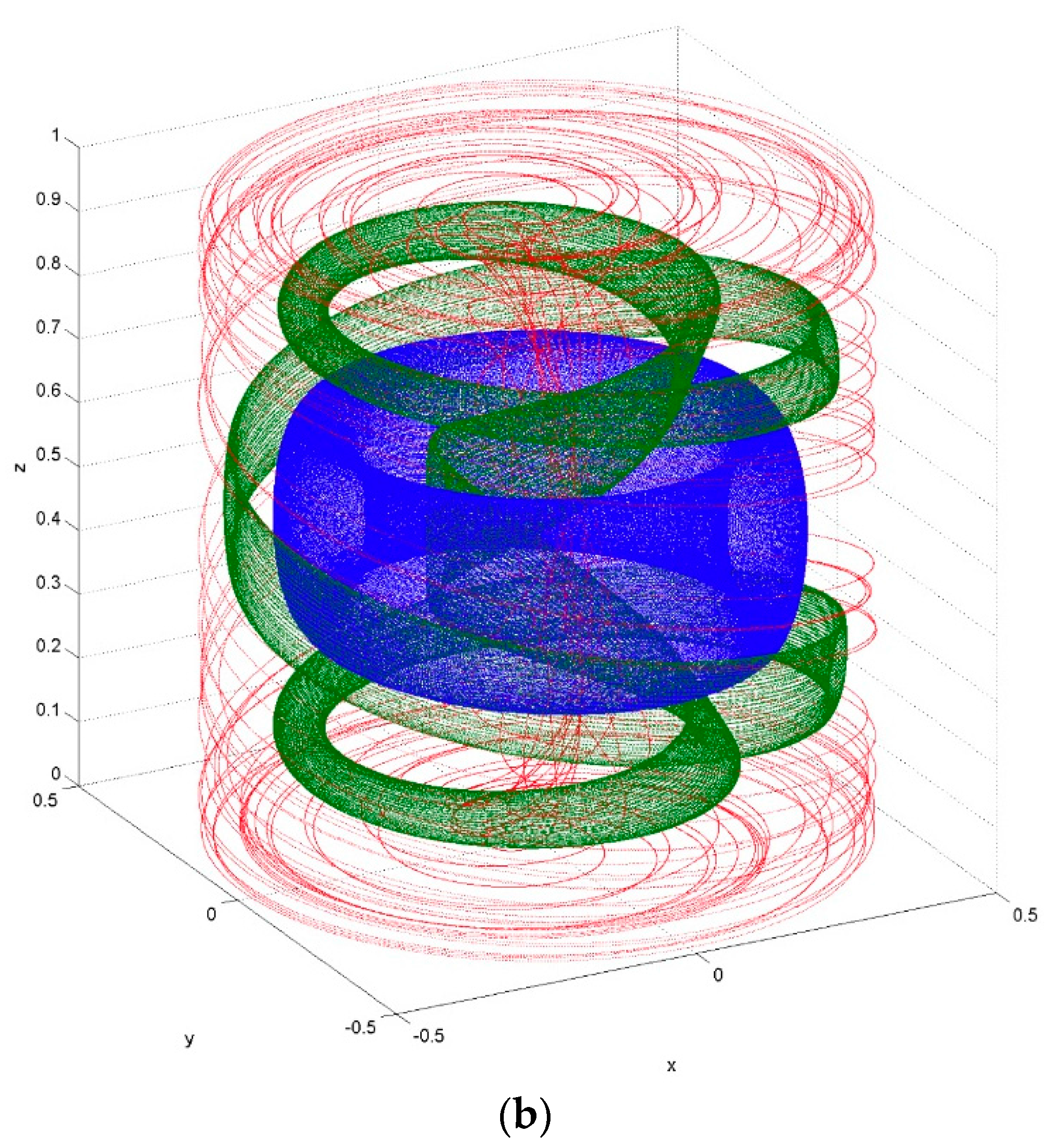 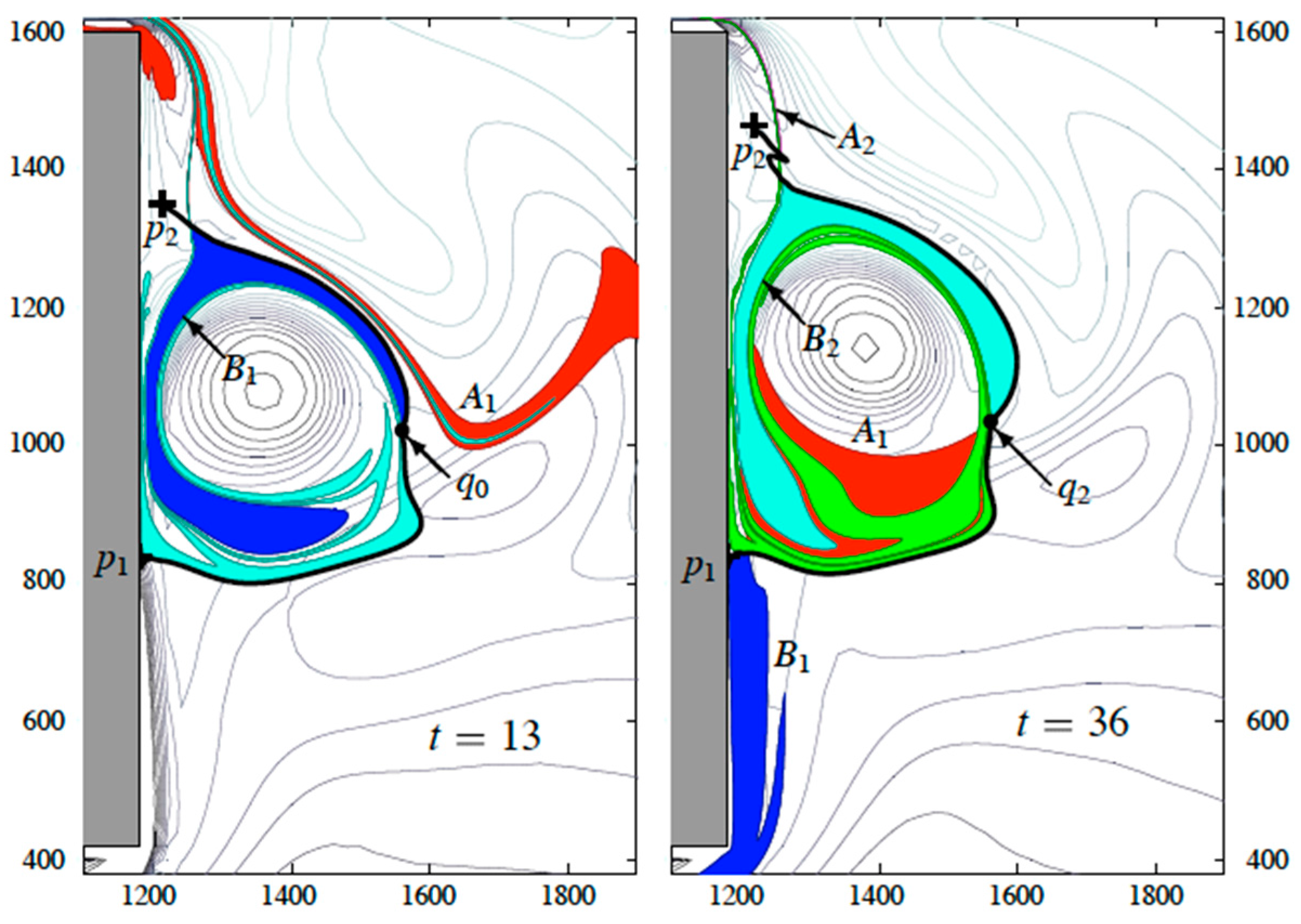 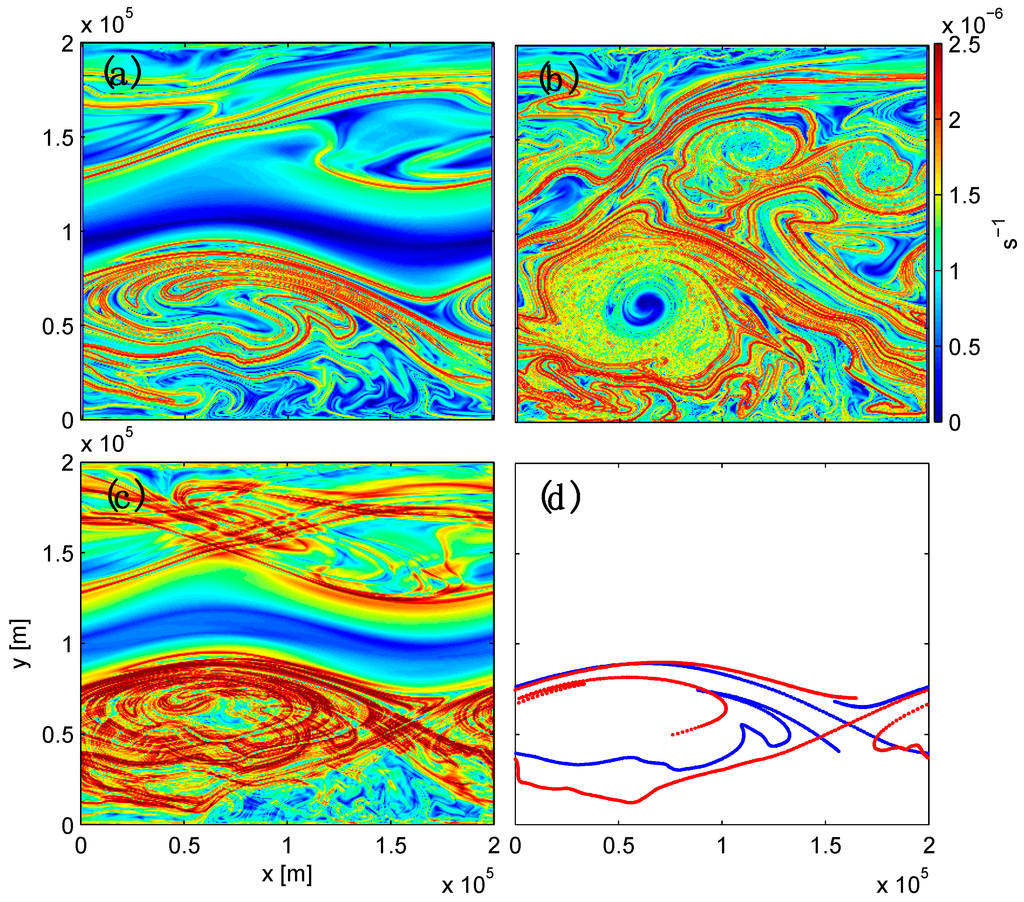 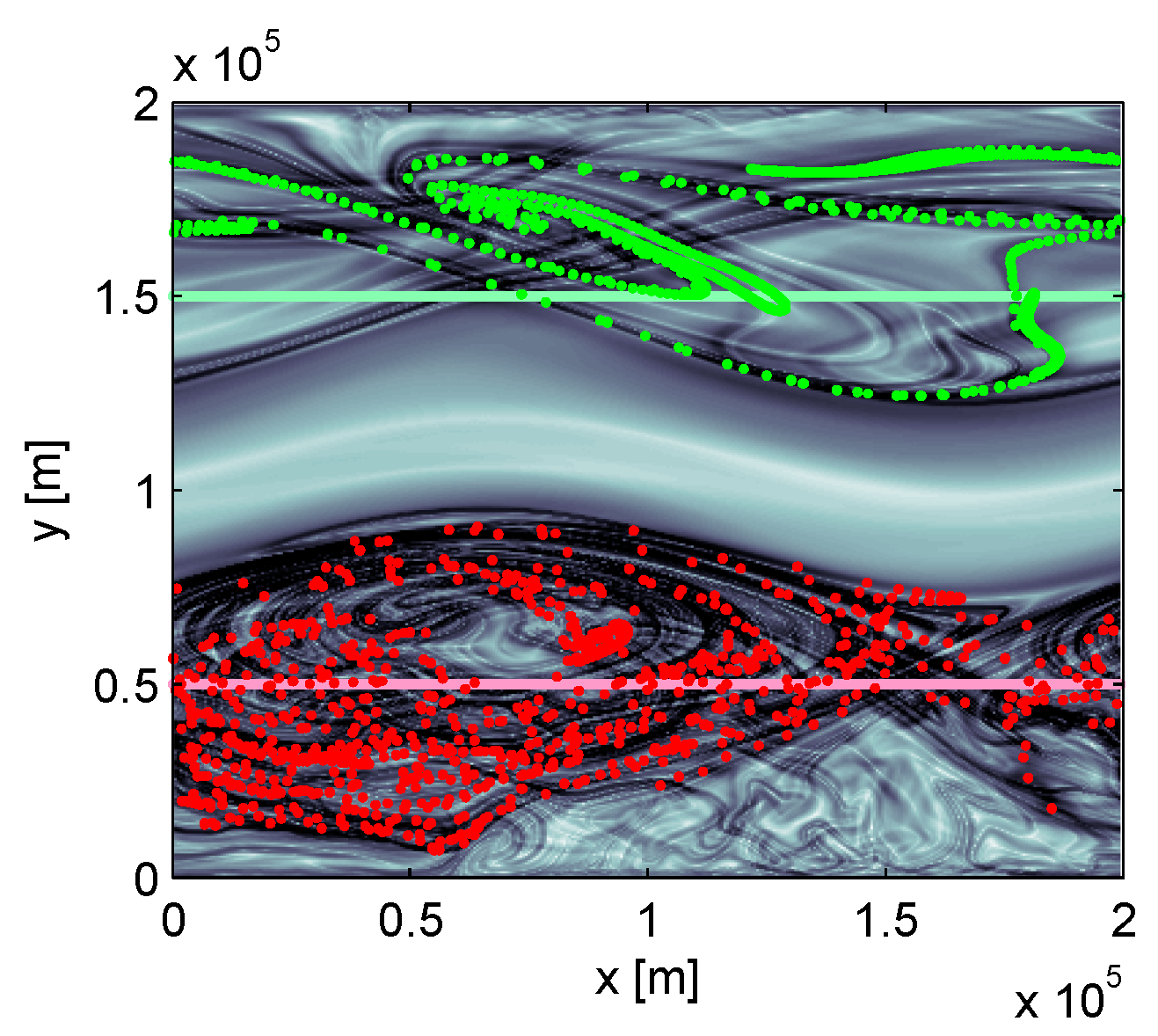 © 2016 by the authors; licensee MDPI, Basel, Switzerland. This article is an open access article distributed under the terms and conditions of the Creative Commons Attribution license ( http://creativecommons.org/licenses/by/4.0/).