Immunotherapy against Systemic Fungal Infections Based on Monoclonal Antibodies

Invasive aspergillosis (IA) is a major opportunistic fungal infection in patients with haematological malignancies. Morbidity and mortality rates are high despite anti-fungal treatment, as the compromised status of immune system prevents the host from responding optimally to conventional therapy. This raises the consideration for immunotherapy as an adjunctive treatment. In this study, we evaluated the utility of expanded human NK cells as treatment against Aspergillus fumigatus infection in vitro and in vivo. The NK cells were expanded and activated by K562 cells genetically modified to express 4-1BB ligand and membrane-bound interleukin-15 (K562-41BBL-mbIL-15) as feeders. The efficacy of these cells was investigated in A. fumigatus killing assays in vitro and as adoptive cellular therapy in vivo. The expanded NK cells possessed potent killing activity at low effector-to-target ratio of 2:1. Fungicidal activity was morphotypal-dependent and most efficacious against A. fumigatus conidia. Fungicidal activity was mediated by dectin-1 receptors on the expanded NK cells leading to augmented release of perforin, resulting in enhanced direct cytolysis. In an immunocompromised mice pulmonary aspergillosis model, we showed that NK cell treatment significantly reduced fungal burden, hence demonstrating the translational potential of expanded NK cells as adjunctive therapy against IA in immunocompromised patients.
Keywords: Aspergillus; antifungal immunity; fungal infection; immune evasion; immune recognition; expanded natural killer cells Aspergillus; antifungal immunity; fungal infection; immune evasion; immune recognition; expanded natural killer cells

Invasive aspergillosis (IA) results in significant mortality and morbidity in immunocompromised hosts, in particular patients with haematological malignancies receiving chemotherapy or conditioning regimens for stem cell transplantation. Despite the availability of newer anti-fungal agents and improved strategies of antifungal prophylaxis, IA mortality rates can be in excess of 35% [1].
To date, there is increased understanding of the roles played by the host innate and adaptive immune responses against Aspergillus, as well as the defense mechanisms which are iatrogenically subverted during chemotherapy and immunosuppressive treatment [2,3]. The limited response to treatment may be attributable to the inability of host immunity to respond appropriately to the pathogens. In response to this, efforts have been invested in recent years on innovative approaches to immunotherapy and augmentation of the host immunity.
Natural killer (NK) cells are known to play a central effector role against viral pathogens. Recent research has described the involvement of NK cells in the mounting of host response against fungi [4,5,6,7]. This raises the prospect that NK cell therapy might potentially be efficacious as an immunotherapeutic option against A. fumigatus, especially in patients with haematologic malignancies in lieu of their cytotoxic efficacy against both tumour- and pathogen-infected cells [8,9,10]. Despite the purported efficacy of NK cells, their relative paucity, short life span, and the need for multiple signals for sustained proliferation, activation, and survival pose as challenges associated with using NK cells for immunotherapeutic purposes [11]. A recent development pioneered the expansion of NK cells in the presence of myeloid cells which had been genetically modified to express membrane bound IL15 and 4-1BB ligand (CD137L). These expanded NK cells are highly active, loaded with cytotoxic granules, perforin, and granzymes standing ready for cytotoxic activity [12]. Here, we investigate the antifungal activity of such expanded and activated natural killer cells against different morphotypes of A. fumigatus both in vitro and in vivo. Our findings demonstrate that adoptive transfer of expanded NK cells is a viable and novel treatment modality against Aspergillus infection.

Preparation of A. fumigatus was done using a previously well characterized A. fumigatus clinical strain (V05-27) [14]. The Aspergillus was grown on chloramphenicol supplemented Sabouraud glucose agar slants for 4–7 days at 37 °C. A. fumigatus spores were harvested by scraping the surface of slants and re-suspending in 0.05% Tween 20 in PBS. Unwanted hyphae were removed by passing the suspension through sterile gauze. The conidial suspension was washed twice and re-suspended in RPMI1640.

All the animals were housed in the animal facility at Biological Resource Centre, Singapore. Animals were handled following Singapore’s “Guidelines on the Care and Use of Laboratory Animals for Scientific Purposes”. Experiments were conducted after approval by Institutional Animal Care and Use Committee (IACUC) under protocol 181308.

Eight-week-old wild type male Balb/c mice were obtained from InVivos. Mice were immunosuppressed with subcutaneous injection of cortisone acetate (250 mg/kg/200 µL) and intra-peritoneal injection of cyclophosphamide (250 mg/kg/100 µL) on day -1. On D0, 20 µL of A. fumigatus spores (1 × 106 fungal cells) were instilled into the nose of the mice after they were lightly anesthetized with isoflurane. Six hours after the infection, 200 µL of expanded NK cells (1 × 107 CFU/mL) suspended in PBS were injected into tail veins of the treated group, while 200 µL of PBS was injected into tail veins of the control group. The infection and treatment procedures were repeated on D1. Mice were observed on D2 and D3. On D4, mice were sacrificed, and lungs were harvested for fungal load quantification. Augmentin 0.25 mg/mL was given in drinking water throughout the duration of the experiment to decrease the risk of superimposed bacterial infection due to immunosuppression [15]. The timeline of immunosuppression and infection is as depicted in Figure 1.

Lung tissues were removed from each mouse, homogenized and diluted in serial 10-fold dilutions. These were plated on Sabouraud agar plates supplemented with chloramphenicol and incubated at 35 °C. After 3 days, fungal colony forming units (CFUs) were enumerated.

Lung tissues were removed from each mouse and placed in 10% formalin. Lung sections were stained with Hematoxylin and eosin (HE) and Gomori methenamine silver (GMS) stains to identify fungal structures and visualize host response. Slides were viewed on an Olympus BX41 microscope and representative images captured at ×200 original magnification using an Olympus DP22 digital camera attached to the microscope.

Fungal killing activity of the expanded NK cells was assessed by using a colorimetric assay with (2,3-bis-[2-methoxy-4-nitro-sulfophenyl]-2H-tetrazolium-5-carboxyanilide) sodium salt (XTT; Sigma Aldrich, St Louis, MO, USA). A. fumigatus spores were plated on 48-well plates at a concentration of 2.5 × 106 CFU/mL per well. The spores were incubated for 8–10 h to obtain hyphae and 4 h for swollen conidia. Expanded NK cells were seeded into wells containing fungi at a concentration of 5 × 106 cells/mL with effector: target ratio of 2:1. Wells with hyphae or swollen conidia of A. fumigatus alone were used as positive control while wells with expanded NK cells only were used as negative controls. Expanded NK cells were co-incubated with A. fumigatus for 6 h; supernatant was collected for cytokine measurement. XTT assay was performed by washing the cells with sterile cold water to lyse NK cells. XTT was added at a concentration of 0.25 mg/mL and incubated for 3 more hours at 37 °C with 5% CO2. 100 µL of the solution was transferred to a 96-well plate and the absorbance was read at a wavelength of 450 nm with 690 nm reference. Percent fungal damage was calculated by using the formula: , where is the absorbance of experimental wells and c is the absorbance of positive control wells.

NK cells were incubated with the dectin-1 receptor antagonist laminarin (250 µg/mL) for 1 h before being seeded into the well containing the A. fumigatus. Laminarin was kindly provided by Dr David Williams (East Tennessee State University, Johnson City, TN, USA). The XTT assay was then carried out as described above.

3.2. The Antifungal Activity of Expanded NK Cells Is Not Attributable to Enhanced Proinflammatory Cytokine Response

We queried if the antifungal activity of the expanded NK cells might be mediated by proinflammatory cytokines. Tumor necrosis factor-alpha (TNF-α) and interferon-gamma (IFN-γ) are known to play central roles in effecting the host effector response against Aspergillus [5,16]. Expanded NK cells did not produce TNF-α against the various Aspergillus morphotypes as compared to PBMC (Figure 3A). Interferon-gamma production by the expanded NK cells was not higher than PBMC (Figure 3B) and were in fact suppressed against swollen conidia and hyphae. Similarly, IL1β and IL6 levels were detected at modest levels in NK cells incubated with Aspergillus, in contrast to PBMC (Figure 3C,D). The findings were indicative that the observed enhanced antifungal efficacy of the NK cells was independent to that of an enhanced cytokine response.

Another important modality for cytotoxic capacity of NK cells is through the release of cytotoxic granules, perforin, which induces pores in the target cell membrane, and granzymes that enter target cells and induce death by activating caspase [17,18]. The expanded NK cells released significantly high levels of perforin when they were exposed to swollen conidia (Figure 4A). However, perforin release was found to be suppressed in NK cells co-incubated with the Aspergillus hyphae. While granzyme B release was significantly higher in NK cells in comparison with PBMC, the levels were found to be much lower when compared with the release of perforin (Figure 4B). In our study, fungal killing capacity of NK cells on swollen conidia was found to be independent of granzyme B, which highlights the functional importance of perforin as an effector cytotoxic molecule against Aspergillus.

Dectin-1 is a well-described C type lectin receptor for beta-glucan in the fungal cell wall. However, the role of dectin-1 on NK cells is not well studied and we queried if dectin-1 might be involved in mediating the cytolytic activity of the expanded NK cells. Blocking dectin-1 with laminarin reduced the fungal killing capacity of expanded NK cells, and this was most clearly seen with the swollen conidia (Figure 5A). Correspondingly, there was a significant reduction in perforin levels from laminarin-treated NK cells with swollen conidia (Figure 5B). On the other hand, granzyme B levels were found to be minimally affected by presence of laminarin (Figure 5C). The production of IFN-γ was independent of dectin-1 blockade (Figure 5D), which was in line with the above findings that IFN-γ and other proinflammatory cytokines were not the mediators of the fungicidal activity of expanded NK cells.
These results point to the involvement of the dectin-1 pathway in mediating the enhanced cytolytic activity of expanded NK cells through release of perforin against swollen Aspergillus conidia. 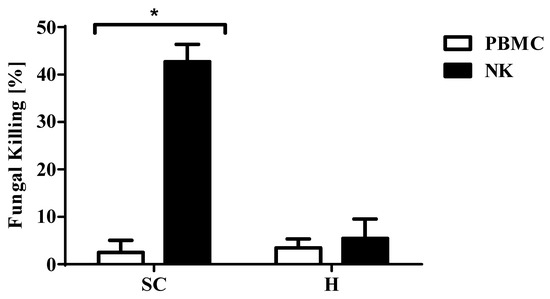 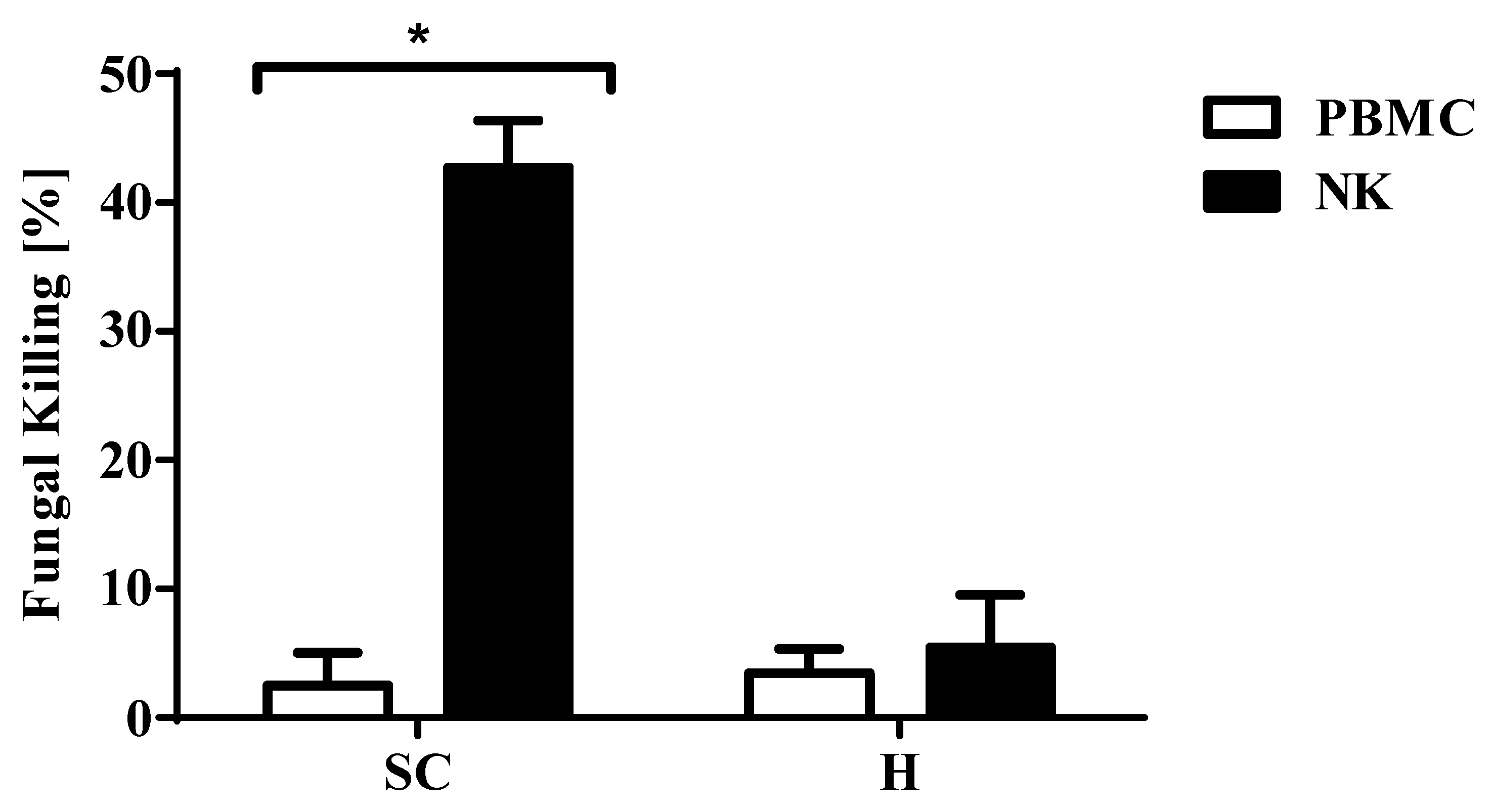 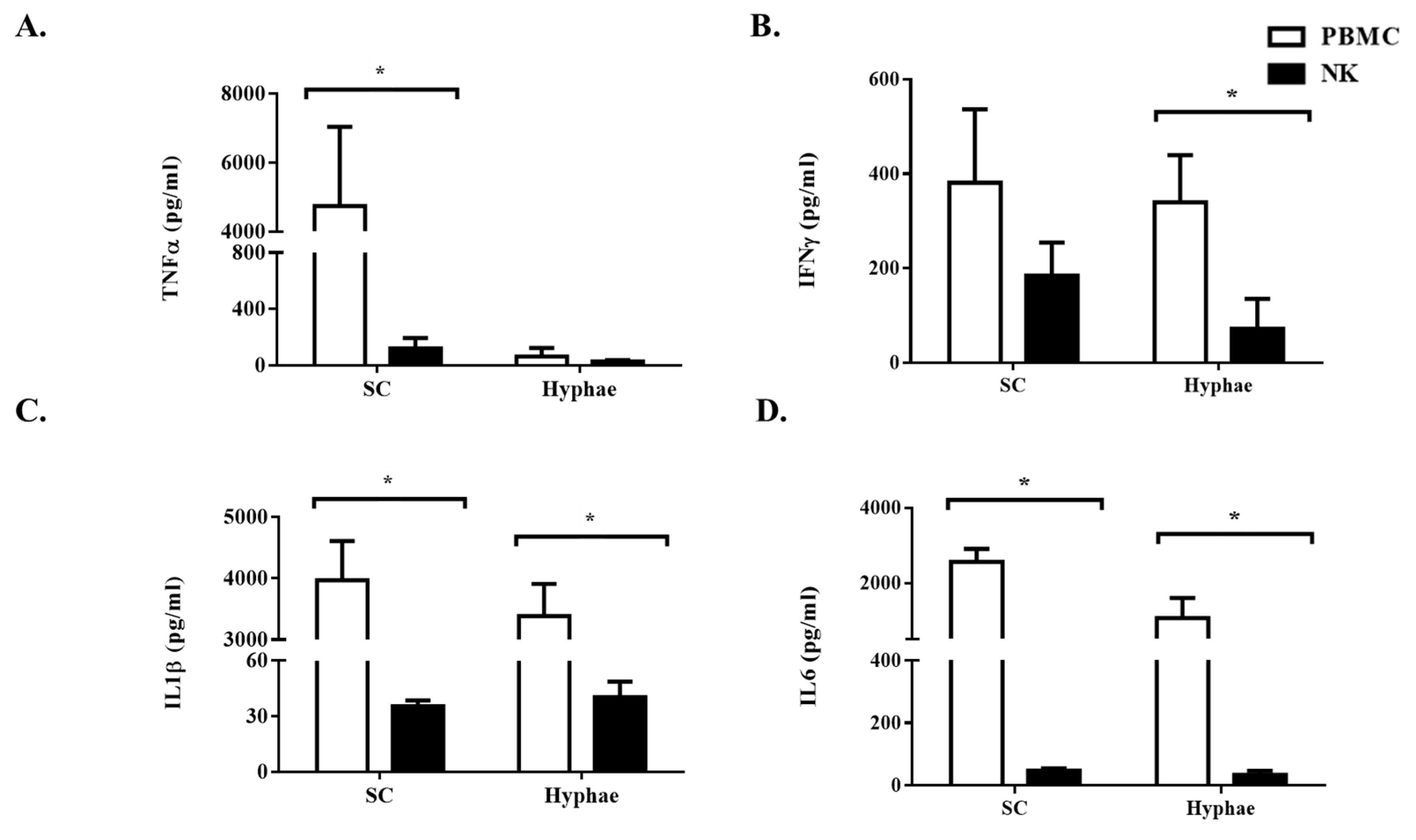 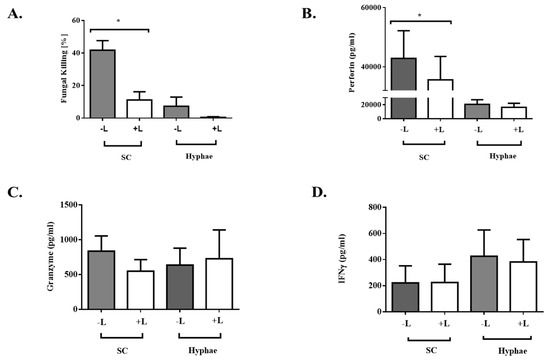