Metabolites from Clonostachys Fungi and Their Biological Activities

The success of Candida albicans as a pathogen relies on its ability to adapt and proliferate in different environmental niches. Pathways regulated by mitogen-activated protein kinases (MAPKs) are involved in sensing environmental conditions and developing an accurate adaptive response. Given the frequent cooperative roles of these routes in cellular functions, we have generated mutants defective in all combinations of the four described MAPKs in C. albicans and characterized its phenotype regarding sensitiveness to specific drugs, morphogenesis and interaction with host immune cells. We demonstrate that all MAPKs are dispensable in this yeast as a mutant defective in Cek1, Cek2, Mkc1 and Hog1 is viable although highly sensitive to oxidative and osmotic stress, displaying a specific pattern of sensitivity to antifungals. By comparing its phenotype with single, double and triple combinations of MAPK-deletion mutants we were able to unveil a Cek1-independent mechanism for Hog1 resistance to Congo red, and confirm the predominant effect of Hog1 on oxidative and osmotic adaptation. The quadruple mutant produces filaments under non-inducing conditions, but is unable to develop chlamydospores. Furthermore, cek1 cek2 mkc1 hog1 cells switch to the opaque state at high frequency, which is blocked by the ectopic expression of HOG1 suggesting a role of this kinase for phenotypic switching. View Full-Text
Keywords: MAPK; osmotic stress; filamentation; chlamydospore; cell wall; oxidative stress; fungal virulence MAPK; osmotic stress; filamentation; chlamydospore; cell wall; oxidative stress; fungal virulence
►▼ Show Figures 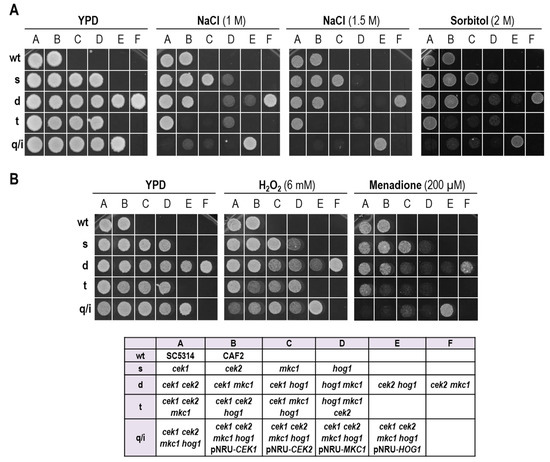