On Commensalism of Candida
Previous Article in Journal

Oral Candidiasis: A Disease of Opportunity

Oral candidiasis, commonly referred to as “thrush,” is an opportunistic fungal infection that commonly affects the oral mucosa. The main causative agent, Candida albicans, is a highly versatile commensal organism that is well adapted to its human host; however, changes in the host microenvironment can promote the transition from one of commensalism to pathogen. This transition is heavily reliant on an impressive repertoire of virulence factors, most notably cell surface adhesins, proteolytic enzymes, morphologic switching, and the development of drug resistance. In the oral cavity, the co-adhesion of C. albicans with bacteria is crucial for its persistence, and a wide range of synergistic interactions with various oral species were described to enhance colonization in the host. As a frequent colonizer of the oral mucosa, the host immune response in the oral cavity is oriented toward a more tolerogenic state and, therefore, local innate immune defenses play a central role in maintaining Candida in its commensal state. Specifically, in addition to preventing Candida adherence to epithelial cells, saliva is enriched with anti-candidal peptides, considered to be part of the host innate immunity. The T helper 17 (Th17)-type adaptive immune response is mainly involved in mucosal host defenses, controlling initial growth of Candida and inhibiting subsequent tissue invasion. Animal models, most notably the mouse model of oropharyngeal candidiasis and the rat model of denture stomatitis, are instrumental in our understanding of Candida virulence factors and the factors leading to host susceptibility to infections. Given the continuing rise in development of resistance to the limited number of traditional antifungal agents, novel therapeutic strategies are directed toward identifying bioactive compounds that target pathogenic mechanisms to prevent C. albicans transition from harmless commensal to pathogen. View Full-Text
Keywords: oral candidiasis; Candida albicans; immune response; fungal–bacterial interactions oral candidiasis; Candida albicans; immune response; fungal–bacterial interactions
►▼ Show Figures 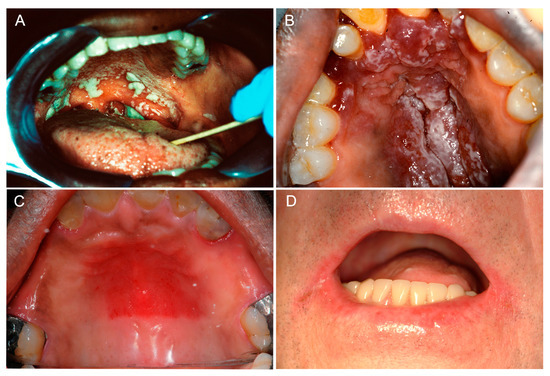