The emerging and reemerging forms of fungal infections encountered in the course of allogeneic bone marrow transplantations, cancer therapy, and organ transplants have necessitated the discovery of antifungal compounds with enhanced efficacy and better compatibility. A very limited number of antifungal compounds are in practice against the various forms of topical and systemic fungal infections. The trends of new antifungals being introduced into the market have remained insignificant while resistance towards the introduced drug has apparently increased, specifically in patients undergoing long-term treatment. Considering the immense potential of natural microbial products for the isolation and screening of novel antibiotics for different pharmaceutical applications as an alternative source has remained largely unexplored. Endophytes are one such microbial community that resides inside all plants without showing any symptoms with the promise of producing diverse bioactive molecules and novel metabolites which have application in medicine, agriculture, and industrial set ups. This review substantially covers the antifungal compounds, including volatile organic compounds, isolated from fungal endophytes of medicinal plants during 2013–2018. Some of the methods for the activation of silent biosynthetic genes are also covered. As such, the compounds described here possess diverse configurations which can be a step towards the development of new antifungal agents directly or precursor molecules after the required modification. View Full-Text
Keywords: endophytic fungi; antifungal compounds; medicinal plants; co-culture; epigenetic modification endophytic fungi; antifungal compounds; medicinal plants; co-culture; epigenetic modification
►▼ Show Figures 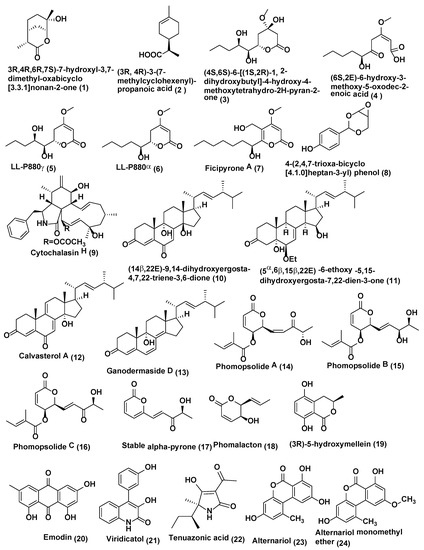