HIV-Associated Cryptococcal Disease in Resource-Limited Settings: A Case for “Prevention Is Better Than Cure”?
Next Article in Special Issue

Morphology Changes in Human Fungal Pathogens upon Interaction with the Host

Morphological changes are a very common and effective strategy for pathogens to survive in the mammalian host. During interactions with their host, human pathogenic fungi undergo an array of morphological changes that are tightly associated with virulence. Candida albicans switches between yeast cells and hyphae during infection. Thermally dimorphic pathogens, such as Histoplasma capsulatum and Blastomyces species transform from hyphal growth to yeast cells in response to host stimuli. Coccidioides and Pneumocystis species produce spherules and cysts, respectively, which allow for the production of offspring in a protected environment. Finally, Cryptococcus species suppress hyphal growth and instead produce an array of yeast cells—from large polyploid titan cells to micro cells. While the morphology changes produced by human fungal pathogens are diverse, they all allow for the pathogens to evade, manipulate, and overcome host immune defenses to cause disease. In this review, we summarize the morphology changes in human fungal pathogens—focusing on morphological features, stimuli, and mechanisms of formation in the host. View Full-Text
Keywords: human fungal pathogen; morphology change; host-pathogen interaction; titan cell; spherules; hyphae human fungal pathogen; morphology change; host-pathogen interaction; titan cell; spherules; hyphae
►▼ Show Figures 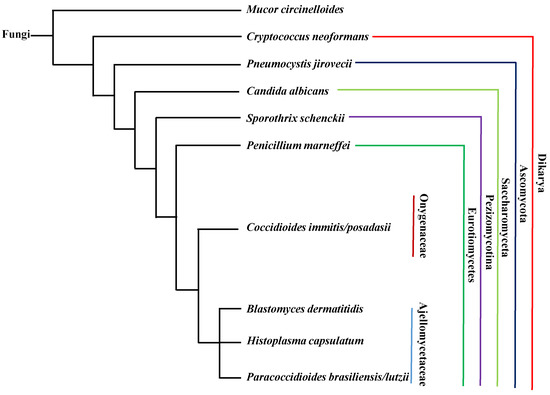