Surveillance for Borrelia spp. in Upland Game Birds in Pennsylvania, USA
Next Article in Special Issue

Paratuberculosis, commonly known as Johne’s disease, is a production-limiting disease of dairy cattle caused by Mycobacterium avium subsp. paratuberculosis (MAP) and has a substantial financial effect on the dairy industry [1]. The disease was first reported in Korea in 1984 and its prevalence was subsequently reported to be 18.7% and 11.7% in dairy and beef cattle, respectively [2]. In Korea, prevalences of 6.1% and 1.2% were recorded in dairy and beef cattle, respectively, in Gyeongnam province in 2009 [3], and a 5.2% prevalence was observed in Jeju province in 2013 [4]. Previous studies have reported outbreaks of MAP in other countries. A cattle herd MAP prevalence of 16.7% was reported in Canada, and a 68% MAP prevalence was recorded in US dairy farms in 2008 [5]. Johne’s disease results in decreased milk production and increased cow replacement costs, which has resulted in economic losses in the US dairy industry estimated at US$ 200 to US$ 250 million annually, or US$ 22 to US$ 27 per cow [6].
The main clinical signs of paratuberculosis are persistent diarrhea, reduced milk production, weight loss, and progressive emaciation. This infectious disease develops slowly and is characterized by chronic degenerative granulomatous enteritis that affects the distal part of the small intestine, as well as the colon and associated lymphoid tissue. Young animals have a greater possibility of getting an MAP infection when their age is below six months. Following infection by MAP, seroconversion usually occurs around two years of age [7]. Not all infected animals develop clinical signs, but the disease can be detected by diagnostic testing a few years after the initial infection [8].
Therefore, adequate diagnostics are essential to reduce the prevalence of MAP, which is a key component of the control of paratuberculosis in a farm [9]. Fecal culture and PCR are the diagnostic tools for detection of the MAP antigen, whereas the ELISA methods are commonly used for detection of MAP antibodies. However, fecal samples sometimes show negative results in true MAP-positive animals due to the intermittent shedding of bacteria, resulting in differing sensitivity of each test depending on the stage of infection [10,11]. Although the serum/milk ELISA has low sensitivity and high specificity, it is commonly used in dairy herds for detection of MAP, due to its acceptable diagnostic performance, as well its time efficiency and cost effectiveness.
Dairy farms participating in the Johne’s disease eradication program in Korea perform MAP screening tests by using antibody detection ELISA regularly, once or twice per year, with irregular fecal antigen detection PCR, and removing MAP-positive animals from the herd. However, annually new MAP-positive animals have been coming out of these participating farms for several years. We presumed that MAP-positive animals were being missed by single time screening, indicating that the evaluation of MAP antibody status is needed throughout the animal’s lifetime. Therefore, the objective of this study was to evaluate MAP antibody kinetics in serum and milk samples throughout the lactation period and to assess the diagnostic performance of the milk ELISA test.

All animal procedures and the study design were approved by the Institutional Animal Care and Use Committee (IACUC) at the National Institute of Animal Science (NIAS), Republic of Korea. The Reference number was NIAS (2013-046).

A longitudinal study was performed on three commercial dairy farms that were enrolled in a Johne’s disease control program in Korea. The cows on these farms underwent one- or two-time screenings per month for Johne’s disease by using MAP antibody detection ELISA (IDEXX Laboratories, Inc. Westbrook, ME, USA). More than a hundred cows were tested from three dairy farms and among them eight cows were diagnosed as MAP-positive during the screening period. The cows had no apparent clinical signs of Johne’s disease and showed normal reproductive and milk yield performance. Two healthy MAP-negative dairy cows were used as a negative control. The control group animals were negative in both fecal PCR and serum/milk ELISA results. Cow-specific information about age, calving date, and milk production was recorded for all tested cows. The ages of all animals ranged from 4 to 8 years. The animals were housed in free-stall housing systems and their average daily production of milk was 27–36 kg/cow.

Blood and milk samples were collected simultaneously for MAP antibody ELISA testing from eight MAP-positive and two healthy MAP-negative cows throughout the year. We collected blood and milk samples one to two times per month; however, a few samples were missed due to inappropriate sample handling or recording. Only blood samples were collected during the dry period. Approximately 5 mL of blood was collected from the jugular vein of each animal and transferred to the laboratory for further processing. For serum preparation, blood samples were centrifuged at 1800× g for 15 min. The serum was then transferred into a screw-cap tube and stored at −20 °C until analysis. Serum samples were tested by MAP-specific antibody ELISA (IDEXX Laboratories, Inc. Westbrook, ME, USA), following the manufacturer’s recommendations. Samples with a sample-to-positive (S/P) ratio of 55 or higher were considered seropositive for MAP antibody detection, as determined by IDEXX kit cutoffs.
Milk samples were collected aseptically from all four teats after discarding the first few streaks. The milk was taken in a vial, transported to the laboratory, and stored at 4 °C until processed. Samples were tested using a commercially available MAP antibody detection ELISA (IDEXX Laboratories, Inc. Westbrook, ME, USA) as per the procedure recommended by the manufacturer. To determine the number of animals that were MAP-antibody-positive by milk ELISA, an S/P ratio of 30 was used as the cut-off value for a MAP-positive test result, as recommended by IDEXX.

Serum and milk ELISA S/P ratios were compared by using correlation analysis and controlling for repeated measures. Pearson’s correlation coefficient (R2) was calculated to determine the linear relationship between test results, and the differences were considered significant at p < 0.05. Interpretation of the R2 values was done as previously reported [12,13,14]; that is, strong agreement (1 > R2 > 0.7), moderate agreement (0.7 > R2 > 0.5), weak agreement (0.5 > R2 > 0.3), and none or very weak agreement (0.3 > R2 > 0).

The eight MAP positive cows (denoted as cows A to H) were enrolled as Johne’s disease cows and their MAP antibody levels were observed in serum and milk ELISA throughout the year (Figure 1). Two healthy MAP-negative cows were used as negative control animals (cows N1 and N2) and their MAP ELISA testing was performed for six months (Figure 1). All animals had different age records and normal calving history, except one animal that had a history of abortion (cow B).

4.3. Steady or Decreasing Trend of MAP Antibody after Parturition

A trend to a steady-state or decreasing MAP antibody (cows A, B, G, and H) was observed after parturition, followed by a fluctuating nature, in the study. This might be due to the presence of transient MAP infections in these cattle, as previously reported in dairy cattle [7]. In addition, during the early stage of Johne’s disease, the MAP antibody titer can fluctuate because of the immune system of the cow restricting the development of MAP infection [20,21]. Although the serum MAP antibody titer was continuously positive after parturition, most of the milk MAP ELISA results were negative (i.e., less than the cut-off value). This may be due to the dilution of MAP antibodies in milk to a level below the detection limit, as has been previously suggested [22,23]. Moreover, low titer animals had higher milk production than those of high titer animals, and the increased milk production may lead to milk ELISA underestimating MAP antibody level [24,25]. Another study suggested that for every 5 kg increase in milk production, the S/P ratio should be multiplied by 0.89. Moreover, during the early stages of Johne’s disease, milk MAP antibody detection can be affected by the dilution effect of increased milk production [22,26].

The MAP antibody titers were influenced by the age of the cows. Cows that were four to five years old had lower antibody titers compared to older cows, which is in agreement with previous reports [24]. Although the sample number was limited in the study, the results show that the MAP antibody titer increases with animal age. Generally, calves become infected by MAP during their first year of life, and paratuberculosis is known to have a long subclinical phase in which there are undetectable amounts of MAP-specific antibodies present [27]. This general pattern of paratuberculosis progression with age has also been indicated by the observation of an increased S/P ratio in ELISA of MAP-positive cows tested repeatedly over time [24].

The relationship between the serum and milk MAP ELISA results was significant in this study (Figure 2). The 180 serum and milk samples showed a moderate-level positive correlation (R2 = 0.5358, p ≤ 0.00) between serum and milk MAP antibody levels. These results are in agreement with Li et al. where a positive correlation was also observed between serum and milk MAP antibodies and the R2 value ranged from 0.572 to 0756 [28]. In addition, a high MAP antibody level in blood was accompanied by increased detection of MAP in the milk of clinically affected cows [29,30]. For more clarification of this relationship, we categorized the data into high (>200) or low (<100) MAP antibody titer. Strong agreement was observed between serum and milk when the antibody titer was high (>200). A high antibody titer is produced during the terminal stage of Johne’s disease, resulting in depression of the immune function and cows are being unable to control the disease [31]. Whereas in animals with a low (<100) MAP antibody titer, a weak agreement was observed in this study (Figure 3) because this condition typically occurs only during the initial stages of the disease, when the immune system of the cow is able to control the bacterial infection. Serum and milk ELISA showed similar results when the MAP antibody titer was above 200. Heavily infected animals carry high levels of antibodies in both serum and milk. In such cases, milk ELISA would be an effective tool for the diagnosis of MAP in a herd. However, if the serum MAP antibody titer is below 100, the milk MAP ELISA is unable to detect a MAP infection due to the low specificity of the milk test. This result indicates that the milk MAP ELISA has low diagnostic performance in the detection of an early stage MAP infection as the obtained low MAP antibody titers may be below the cut-off value. The milk MAP ELISA test might be useful for general MAP screening in a herd, but for an applications such as a MAP eradication program, serum ELISA should be used due to its higher diagnostic performance compared to that of milk ELISA.
Our study has some limitations. The sample number of MAP positive cows was comparatively low, although more than hundred cows were tested for primary screening. A higher number of MAP-positive cows should be included to determine the certainty of our results. However, the strength of this study is that both serum and milk samples were collected simultaneously from both MAP-positive and MAP-negative control animals throughout the year to observe MAP antibody kinetics. To the best of our knowledge, this is the first recently conducted study in which simultaneous serum and milk samples were obtained over a year to observe the longitudinal changes in MAP antibody level in dairy cattle.

This work was supported by a grant from the National Research Foundation of Korea (NRF-2018R1C1B6004589) and by the Cooperative Research Program for Agriculture Science & Technology Development (PJ00897002), Republic of Korea. 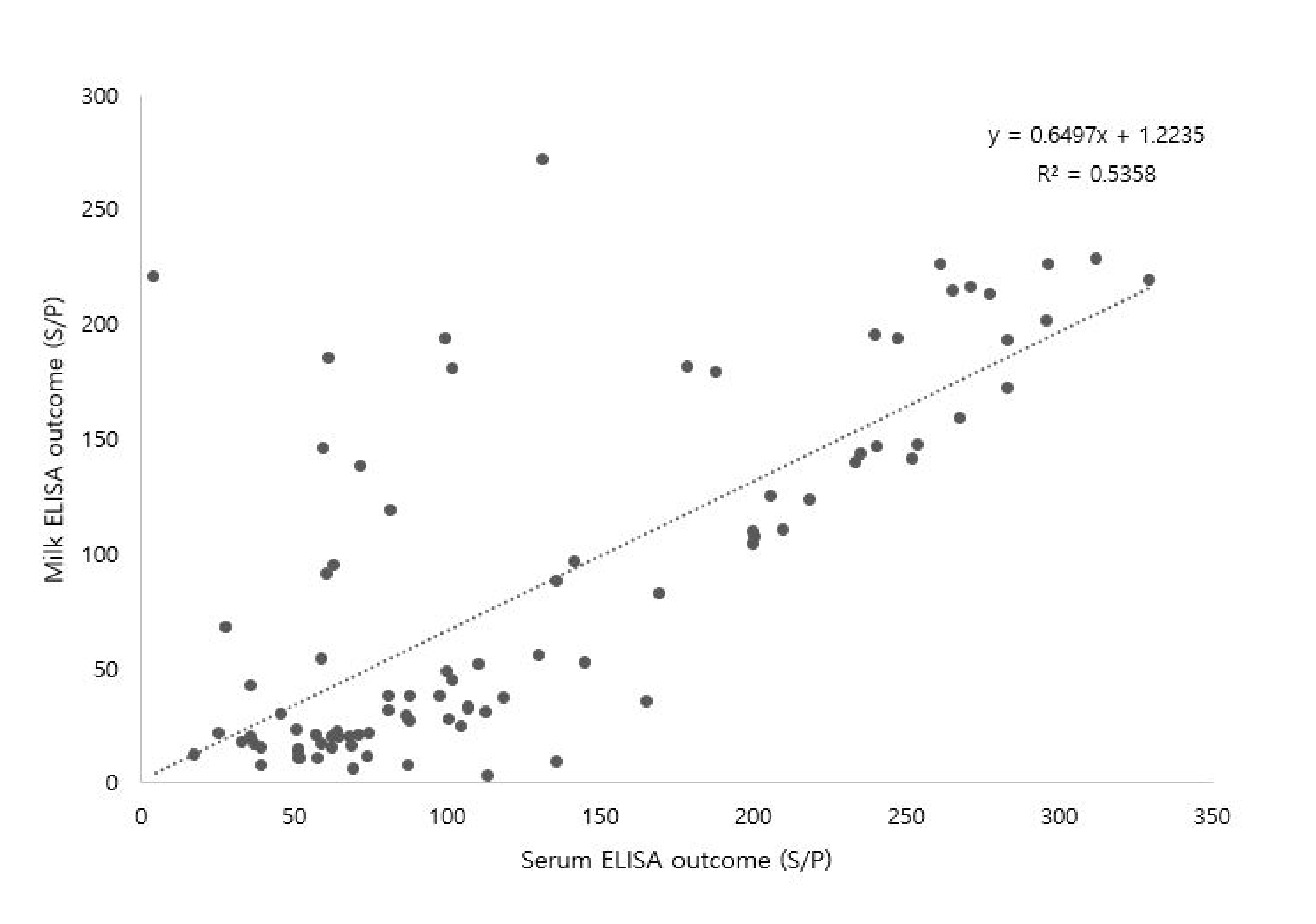