The presence of a wildlife reservoir for Mycobacterium bovis complicates the eradication of bovine tuberculosis (BTB) from domestic cattle populations. For the BTB eradication program in Fiji, there is concern about the small Indian mongoose (Herpestes auropunctatus), which is overabundant and in direct contact with cattle. Consequently, a survey of mongooses trapped on three BTB affected dairy farms led to necropsy of 85 mongooses during January–February 2017. Thirty (35%) mongooses had gross pathological changes including possible granulomas detected at necropsy, and tissues from these animals were taken for histopathological examination. Granulomatous lesions were present in 53% of animals examined histopathologically but acid-fast bacilli were not observed and the majority of lesions in lung and kidney were associated with the nematodes Pulmostrongylus herpestis and Capillaria sp., respectively. Nevertheless, assuming test sensitivity of 35% for the current study, from this sample of 85 mongooses it can be concluded with 95% confidence that if present in the mongoose population susceptible to trapping, M. bovis prevalence was ≤10%. The prevalence of intercurrent lesions raised concerns about gross pathology as a screening test for M. bovis infection in mongooses in Fiji, and therefore pathogen detection methods such as bacterial culture and direct tissue PCR are recommended for future surveys. These are needed to completely rule out the mongoose as a reservoir host for M. bovis in Fiji. View Full-Text
Keywords: Fiji; mongoose; reservoir host; Mycobacterium bovis; surveillance Fiji; mongoose; reservoir host; Mycobacterium bovis; surveillance
►▼ Show Figures 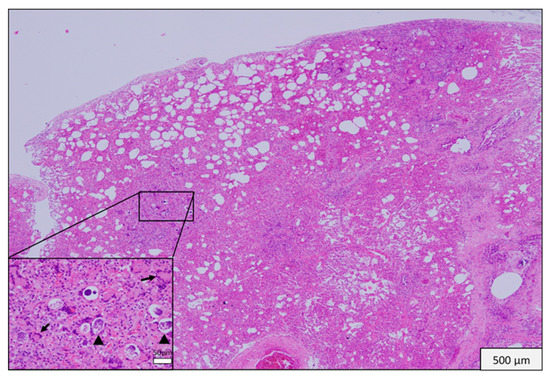