Application of Elicitors, as Conventional and Nano Forms, in Viticulture: Effects on Phenolic, Aromatic and Nitrogen Composition of Tempranillo Wines
Previous Article in Journal

Fermentation of the Cucurbita ficifolia Fruit Juice: Its Antioxidant Activity and Effects on the Glycemia

:
Cucurbita ficifolia is an edible plant whose fruits have hypoglycemic, anti-inflammatory, and antioxidant activities. Fermentation might improve these properties. This research aims to perform and characterize its fermentation in native and induced conditions with Lactobacillus plantarum (Lp) and evaluate its antioxidant activity and effect on glycemia. Fresh juice from mature fruits was characterized. One portion of this juice was spontaneously left to ferment (native fermentation), and the other was inoculated with Lp (controlled fermentation). Fermentation was monitored each 8 h by 56 h to measure microbial growth, pH, acidity, sugars, soluble protein, polyphenols and flavonoids, antioxidant activity, and effects on glycemia. In native fermentation, the growth of total microorganisms increased up to 32 h, decreasing at the end of the process. In Lp fermentation, total microorganisms increased until 16 h to stay constant at the end, with a predominance of Lp. The pH and the sugars decreased in the two fermentations, while polyphenol and flavonoid increased. In spontaneous fermentation, these changes were lesser. Both fermentations, like fresh juice, preserve functional properties (antioxidant, alpha-glucosidase inhibition, and hypoglycemia). The fermentation of this juice with Lp may develop functional beverages, which is significant due to its consumption as an edible fruit with medicinal properties.
Keywords:
Cucurbita ficifolia; Lactobacillus plantarum; lactic fermentation; polyphenolic compounds; flavonoids; antioxidant activity 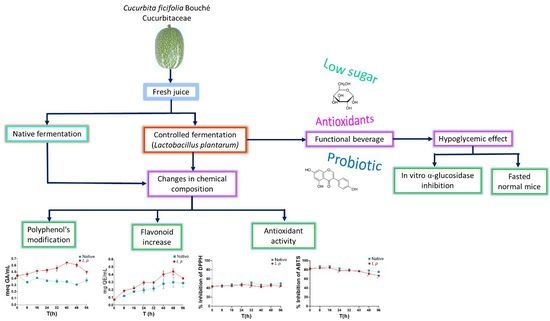 Cucurbita ficifolia (C. ficifolia), a plant known for its edible fruits, has been associated with antioxidant and anti-inflammatory activities and hypoglycemic effects [1,2]. Several fruit compounds were proposed as responsible for these biological activities, such as phenols, phytosterols, and D-chiro-inositol [3,4]. Therefore, the preparation of functional products from these fruits may be significant due to their consumption and proven medicinal properties.
The development of non-dairy fermented beverages from fruits with beneficial effects on health has increased, resulting in nutritious products and adjuvants in disease treatment [5,6]. Fruits of several plants have been used to produce fermented beverages, observing qualitative and quantitative modifications in the content of some of their components, especially polyphenols. Therefore, fermentation processes may impact many of the plants’ previously reported biological activities [7,8].
Several chemical transformations occur during fermentation, either spontaneously or under controlled conditions. These transformations modify qualitative and quantitatively nutritional compounds and the secondary metabolites in many fruits, impacting in their functional properties and organoleptic characteristics [9]. The controlled fermentation with lactic acid bacteria (LAB) has been a good process in developing functional beverages [10]. Primarily using Lactobacillus plantarum (Lp), a probiotic strain that hydrolyses phenolic compounds, modifying the composition and properties of the raw material [11].
C. ficifolia contains bioactive polyphenolic compounds with demonstrated antioxidant, anti-inflammatory, and anti-diabetic activities. It represents a potential platform for developing new functional products, with a high possibility of being used as adjuvants in treating diabetes mellitus (DM). Considering that it has not been yet explored acid fermentation of C. ficifolia, this research aims to characterize the fermentation of the C. ficifolia fruit juice in two conditions: spontaneously (native) and inoculating with Lp (controlled) and evaluate their antioxidant and hypoglycemic effects.

After harvesting in October 2019 at Ixtapaluca, Estado de Mexico, Mexico, the fruits were washed and weighed, measuring the longitudinal (LP) and equatorial (EP) perimeters and the sphericity coefficient ε (ε = EP/LP) [12]. The shell and seeds were removed, and the juice was obtained from the mesocarp with an electrical processor and filtered.

2.2. Fermentations of the C. ficifolia Juice: Native and Controlled

In native fermentation, the juice filtered was left spontaneously to ferment at 30 °C for 56 h. In the controlled fermentation, the strain of Lp was cultured in the broth Man Rogosa Sharp (MRS) (Difco®, Detroit, MI, USA) at 30 °C. After 24 h, 10 mL were transferred to sterile MRS broth and incubated at 30 °C until it reached an absorbance of 1.0 at 600 nm. Then, the juice was inoculated with Lp 5% (v/v) and incubated at 30 °C for 56 h. Samples of 30 mL of both fermentations were withdrawn every 8 h under aseptic conditions. All samples were filtered and frozen until further analysis.

2.6. Determination of Total Polyphenols and Flavonoids

The juice of the C. ficifolia and samples at 48 h of fermentation (native and controlled) were subjected to an alpha glucosidase inhibitory in vitro assay. A p-nitrophenyl-α-d-glucopyranoside (pNPG) solution was prepared with phosphate buffer (0.1 M, pH 6.9). A total of 50 µL of α-glucosidase (1 U/mL) was preincubated with the juice of C. ficifolia and the native and controlled fermentations (50 µL of each) for 10 min. Then, 50 µL of both solutions were mixed and incubated at 37 °C for 5 min. The α-glucosidase activity was determined by measuring the absorbance at 405 nm (UV–VIS spectrometer, PerkinElmer®) and compared with pNPG solution. The percentage of inhibition was calculated with Equation (6).
% Inibition = [(ControlAbsorbance − SampleAbsorbance)/ControlAbsorbance] × 100

2.9. Effects on the Glycemia of the Juice and Samples at the 48 h of Native and Controlled Fermentation

Figure 1 shows the sizes of the fruits and seeds of C. ficifolia. Other physical attributes of C. ficifolia fruits, including their weight, are shown in Table 1. Considering the sphericity coefficient ε, where 1.0 corresponds to a spherical shape, and lower values to an oval, the fruits used in this study had an oval shape and an average weight of almost 4.5 kg. The seeds were black with an average weight of 136.7 ± 35.1 g. The fiber content in the fruit was 12.2% (Table 1).

3.2. Microbial Growth in Native and Controlled Fermentation of the C. ficifolia Juice

Figure 2 shows the microbial profile of the native fermentation (A) and controlled (B) of C. ficifolia juice for 56 h. Predominant native microbiota in the juice (t = 0): In LAB (MRS) was 12 ± 0.7 Log CFU/mL, followed by mesophiles (PCA) with 8 ± 0.01 Log CFU/mL, and fungi and yeast (PDA) 5 ± 1.4 Log CFU/mL. Figure 2A shows the microbial growth of the native fermentation. In this fermentation, the exponential growth of the LAB (MRS) was observed from 8 to 32 h (21 ± 2.0 Log CFU/mL) without reaching a stable phase, with a reduction in initial values at the end (56 h). Mesophiles exhibited an exponential growth from 0 to 8 h, with a maximal increase of 18 ± 2.0 CFU/mL, and gradually fell to the end (56 h). Fungi and yeast maximal microbial count was 25 ± 2.0 CFU/mL (32 h).
Figure 2B shows the microbial growth of induced lactic fermentation, reaching the maximal growth (27 ± 2.1 log CFU/mL) at 24 h; then, the LAB count decreased to 23 ± 1.0 log CFU/mL (56 h). In PDA, the highest growth occurred at 16 h (15.5 ± 2.1 Log CFU/mL), followed by a decrease at the end (12 ± 2.8 Log CFU/mL). The maximal microbial concentration observed in PCA was at 32 h (14.5 ± 4.1 Log CFU/mL), then reduced to 10 ± 0.1 log CFU/mL at the end (Figure 2B). Table 2 shows the kinetics parameters in the fermented juice of C. ficifolia with the two systems. Faster growth was observed in controlled fermentation in MRS medium, which accounts for LAB. While in native fermentation, yeast and fungi grew faster in the PDA medium. The results of the predictive Gompertz’s model showed that LAB microorganisms grew faster than yeast and fungi. The Lp growth shown by the model was the only one that matched well with the growth calculated experimentally (Table 3).

3.6. In Vitro Antioxidant Activity of Native and Controlled Fermentations

3.7. Comparative Analysis at 48 h of the Native and Controlled Fermentations against the C. ficifolia Juice (t = 0)

In fermented juice with LAB, the exponential growth at 48 h reached a terminal stationary phase with 27 ± 2.1 log CFU/mL (Figure 2B) and a high content of flavonoids (0.44 ± 0.02 mg EqQ/mL) (Figure 4D). Therefore, values at 48 h were used to compare fermented juices (Table 4). At this time, the controlled fermentation decreased the pH, reducing sugars and proteins. In contrast, TTA, polyphenols, and flavonoids increased (800%, 38.6%, and 528%, respectively). DPPH did not change significantly, whereas inhibition of ABTS decreased by 17.4%. In the case of native fermentation, the reductions in pH and reducing sugars were lesser than in controlled fermentation. The rise in TTA and flavonoids also was less than in controlled fermentation. In native fermentation, reduced polyphenols were observed. Considering these values at 48 h, in this time were evaluated the effects of both fermented products on the in vitro alpha-glucosidase inhibition and the glycemia of fasted normal mice.

3.8. Alpha-Glucosidase Inhibitory Effect and on the Glycemia

In conclusion, both fermentations modified the chemical composition of the unfermented juice of C. ficifolia. The data suggest that a controlled fermentation of C. ficifolia by Lp may improve its functional properties, particularly with glycemia; 48 h of fermentation might be sufficient to stop the process. These data can serve as a base for developing functional food with antioxidant properties, low sugar content, and effects on glycemia with possible utility in DM. 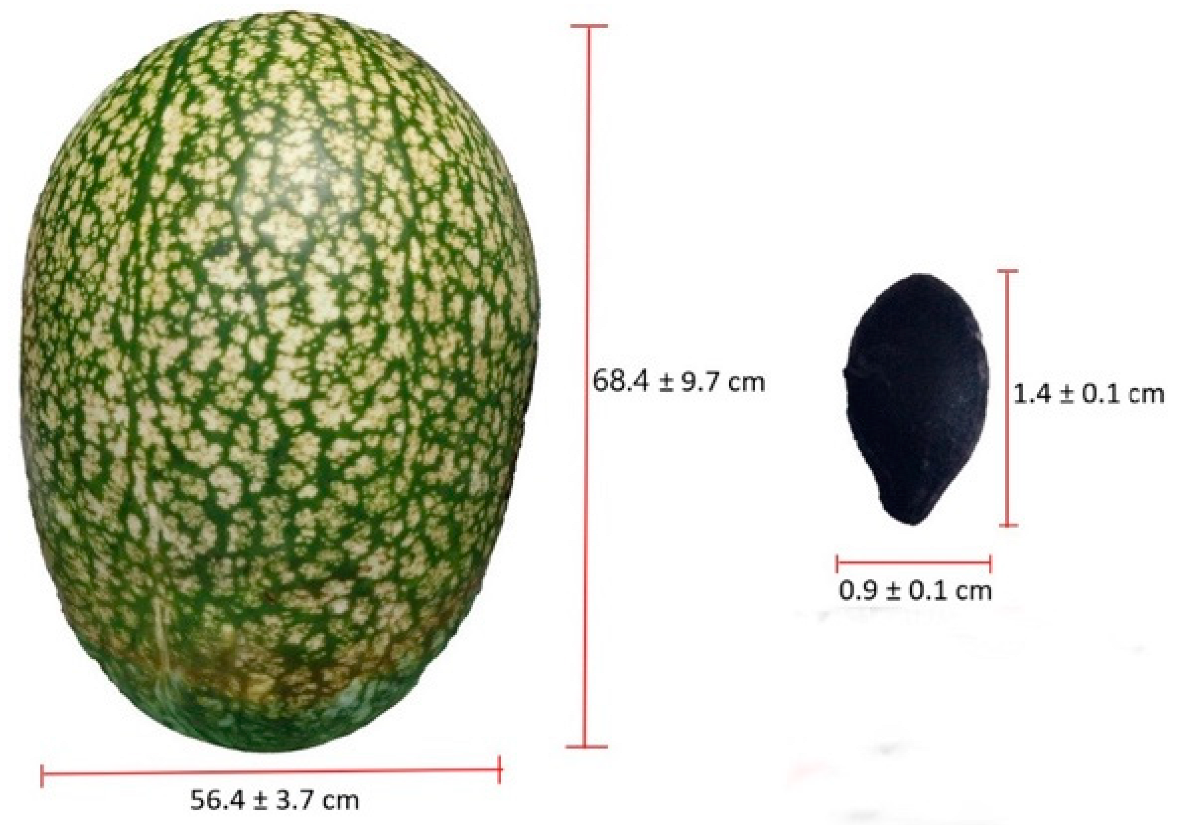 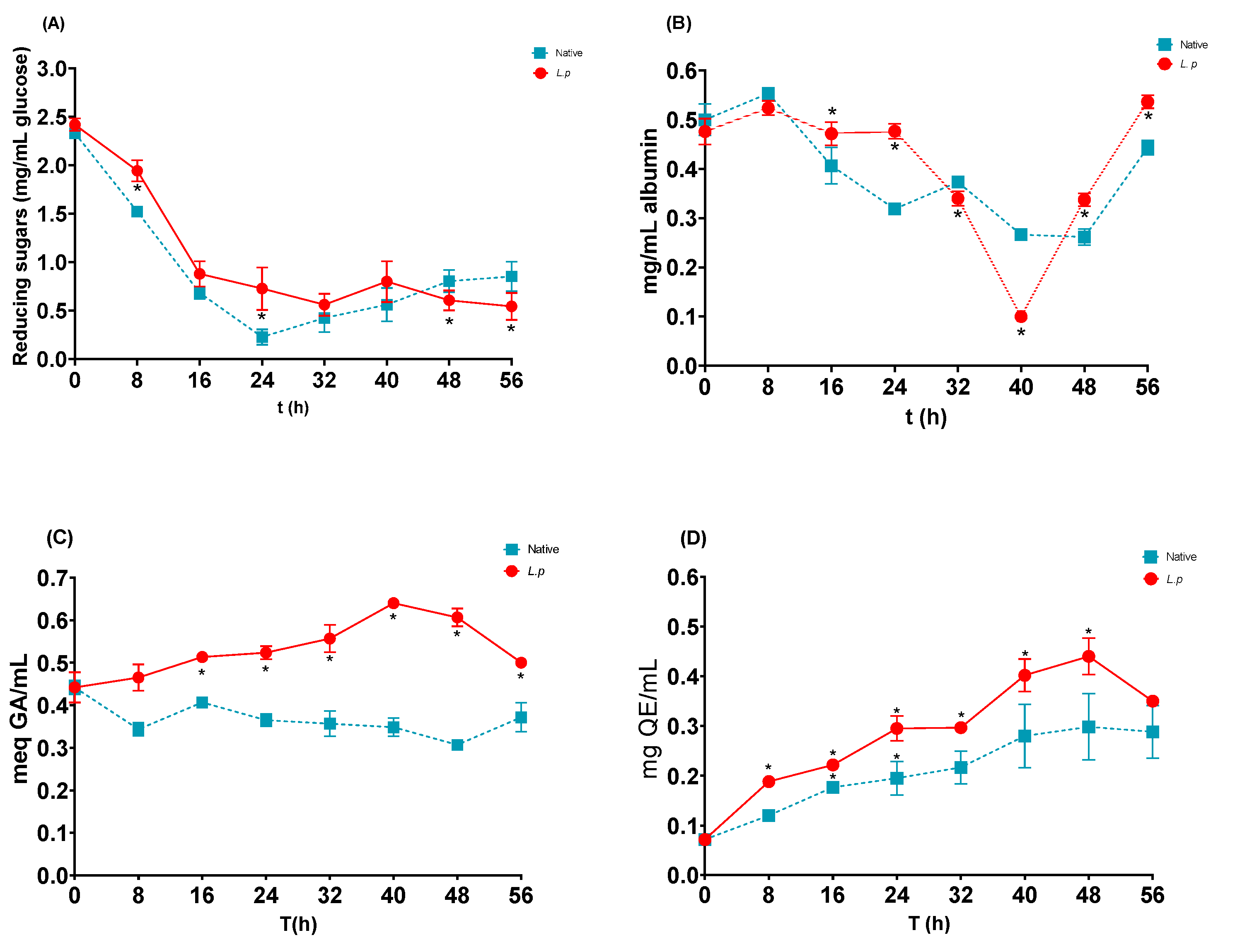