With their potential to cure a wide variety of disease indications and address vast patient populations, allogeneic cell therapies derived from pluripotent stem cells (PSCs) are poised to revolutionize therapeutic medicines [1,2]. However, 2D planar manufacturing technologies that have been commonly used for small scale R&D and early stage clinical trials are inadequate and cost-prohibitive for production at the larger scales required for late-stage clinical trials and commercial manufacturing [3]. Single-use bioreactors are widely recognized as a feasible manufacturing solution but need to be optimized in order to meet the unique process requirements of PSCs [4]. One of the critical challenges for future success in commercializing allogeneic cell therapy products is establishing a scalable manufacturing technology that can reliably reproduce the yield and quality of PSC-derived products generated from small-scale R&D at larger scales sufficient for commercial manufacturing [5].
PSCs are mortal human cells that include specific cell types such as human embryonic stem cells (hESCs) and induced pluripotent stem cells (iPSCs). When cultivated in a 2D planar vessel, PSCs attach to a surface substrate and grow as a monolayer. In contrast, starting from single cells or small clumps in suspension bioreactors, PSCs that come into contact will naturally clump together to form spherical cell aggregates [6]. The formation of cell aggregates is required not only for the cell expansion phase but also for subsequent differentiation, which can be a multi-step process that directs the pluripotent cells to turn into a final target cell type for treating a particular disease.
Depending on a particular cell expansion and differentiation process, there is an optimal range of spherical cell aggregate sizes that can maximize the efficiency and production yield of expansion and differentiation processes in a bioreactor [7,8,9]. If a PSC aggregate becomes too large, nutrients and the growth or differentiation factors may be unable to evenly diffuse from the aggregate surface into its center, leading to unwanted cell death or heterogeneous cell populations during expansion or differentiation [10,11]. PSC aggregates that are too small may result in less efficient cell expansion and differentiation, thus lowering the yields of final target cells [12].
There are varying published examples of optimal cell aggregate sizes for different cell types and cell culture process steps. One experiment using hESCs showed that maximum viability and minimal cell apoptosis during expansion was achieved when average aggregate diameter was 300 μm after 7 days of expansion, while apoptosis (with the majority of necrotic cells in the centers of aggregates) peaked by day 14 if the average diameter reached 500 μm [13]. In another experiment, hESC aggregates with diameters of 400 μm detrimentally had half the concentration of oxygen in their centers compared to aggregates of 200 μm [10]. In a different experiment focusing on hESC differentiation, an average diameter of 450 μm was ideal for cardiogenesis, whereas diameters between 150–300 μm were ideal for endothelial cell differentiation [14]. For two different experiments involving hPSCs, an average aggregate diameter of 139 ± 26 μm was optimal for initiating differentiation into neural cells in one experiment [15], while an average diameter of 130 ± 40 μm was optimal for endoderm induction in the other experiment [16]. As these various experiments indicate, optimal cell aggregate size is highly dependent on factors such as cell type and expansion or differentiation process steps.
While PSC aggregate formation can be influenced by variables such as cell proliferation rate, cell–cell adhesion strength, and cell packing density, the hydrodynamic environment inside a bioreactor, which is created by the impeller used to continually mix the liquid media, also has a significant impact on determining aggregate size and, ultimately, cell viability [17]. The hydrodynamic environment is characterized by the two parameters of fluid shear stress and turbulent energy dissipation rate. Both of these parameters are inversely correlated with the average size of PSC aggregates: higher levels of shear stress and turbulent energy dissipation rate result in smaller sized aggregates, and vice versa. After the initial seeding of single cells or small preformed aggregates into a bioreactor, collisions due to the hydrodynamic environment will facilitate aggregate growth, either through the addition of single cells onto existing aggregates or the fusion of smaller aggregates into larger ones. At sufficiently higher agitation rates, the increased levels of shear stress will promote the breakage of loosely attached or temporarily agglomerated larger aggregates and thus limit their maximum possible size [18].
Fluid mixing in a bioreactor using a traditional horizontal-blade impeller creates a significantly uneven hydrodynamic environment. The highest levels of shear stress and turbulent energy dissipation rates will be near the tips of the rapidly spinning impeller, with decreasing gradients of these hydrodynamic parameters as the distance from the impeller increases [19,20]. Such a wide range of shear stress levels and energy dissipation rates in a horizontal-blade impeller bioreactor results in a non-uniform hydrodynamic environment, which in turn results in a wide variation in PSC aggregate sizes. In this scenario the size of cell aggregates will vary and the range of aggregate diameters in suspension becomes broad, which ultimately results in an inconsistent yield and quality of PSCs during expansion and differentiation steps. This variation in PSC aggregate size becomes more pronounced at larger sizes of horizontal-blade impeller bioreactors.

The research in this manuscript received no external funding. 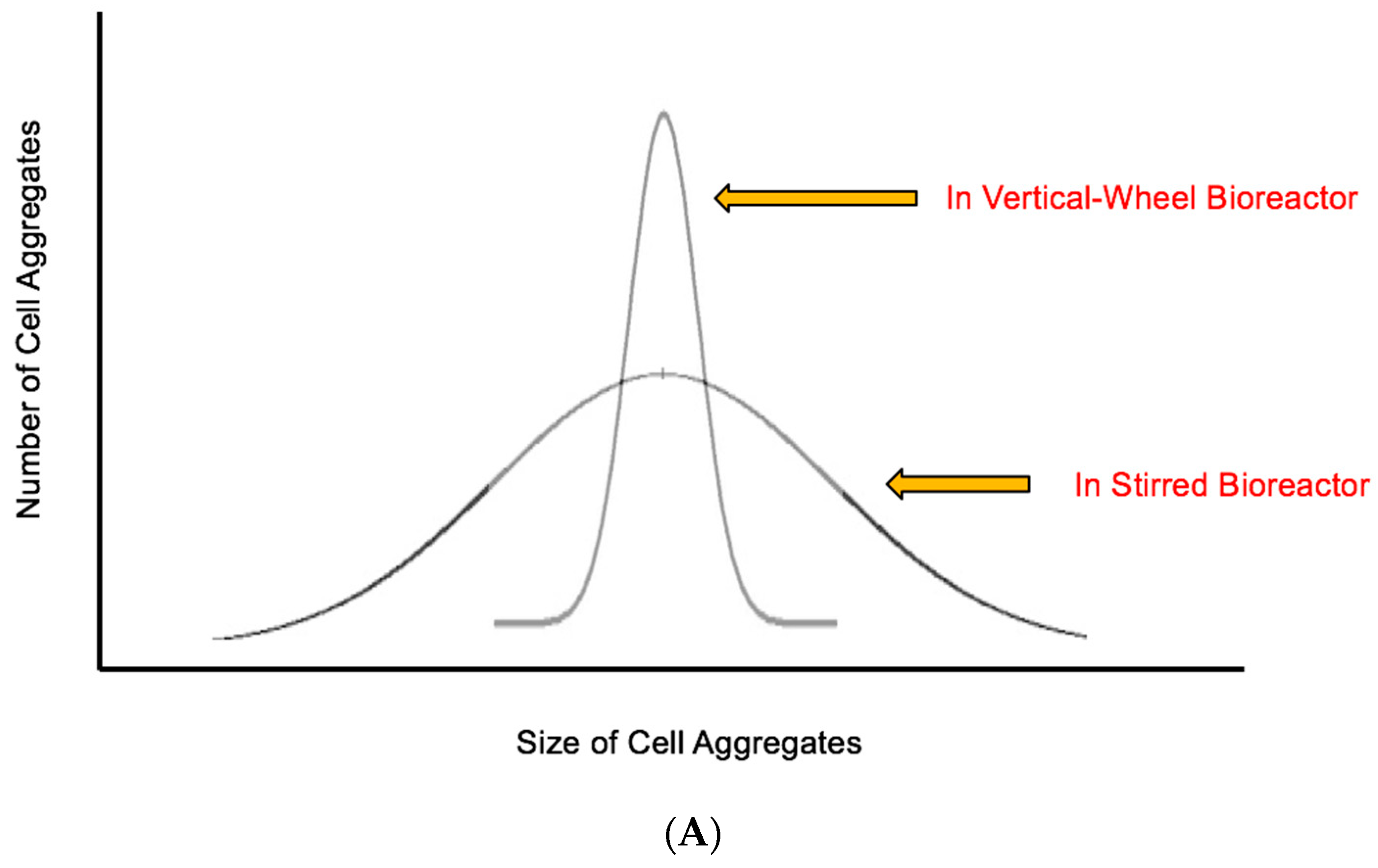 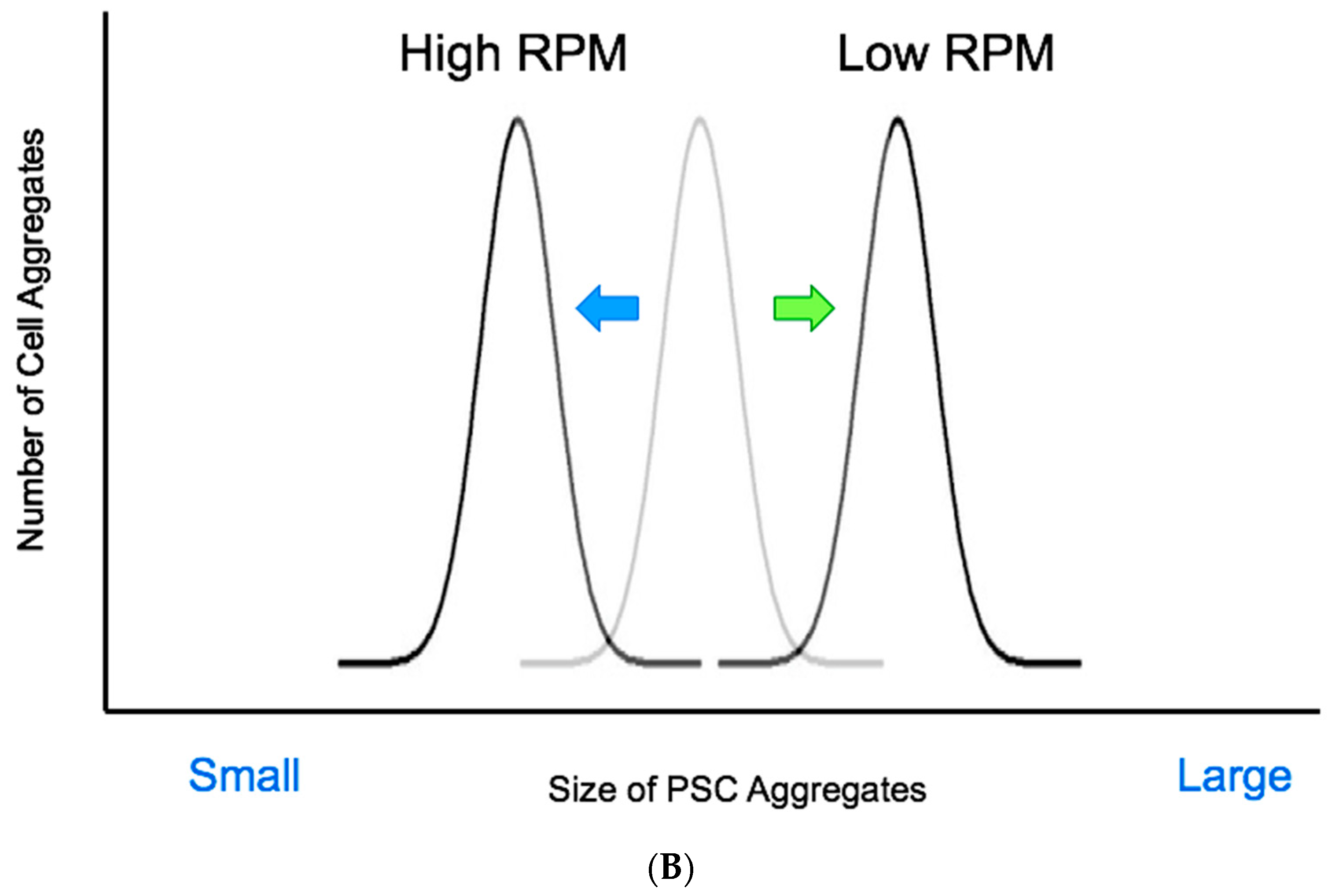