The efficiency of drug delivery to the eye using topical drop therapy is limited by the ocular clearance mechanisms. Nanocarriers, able to encapsulate bioactive compounds and slow down their release, may allow for prolonged on-eye residence times when combined with topical application for treatment of ocular conditions. Previously, self-assemblies of methylcellulose (MC) hydrophobized with N-tert-butylacrylamide side chains (MC-g-PNtBAm) were developed. The purpose of the current study was to investigate the impact of the methylcellulose backbone length on the properties of the nanogels. We synthesized MC-g-PNtBAm nanogels using four different molecular weights of MC with two degrees of hydrophobic modification and investigated the physical and chemical properties of the resulting polymeric nanogels. While no significant change could be observed at a high degree of hydrophobization, properties were affected at a lower one. Increasing the molecular weight of MC improved the swelling capacity of the nanogels, increasing their size in water. An effect on the drug release was also noted. Nanogels prepared using MC with a molecular weight of 30 kDa did not retain as much dexamethasone and released it faster compared to those prepared using 230 kDa MC. Thus, besides the degree of hydrophobization, the length of MC chains provides another means of tuning the properties of MC-g-PNtBAm nanogels. View Full-Text
Keywords: methylcellulose; hydrophobization; molecular weight; self-assembly; drug delivery/release methylcellulose; hydrophobization; molecular weight; self-assembly; drug delivery/release
►▼ Show Figures 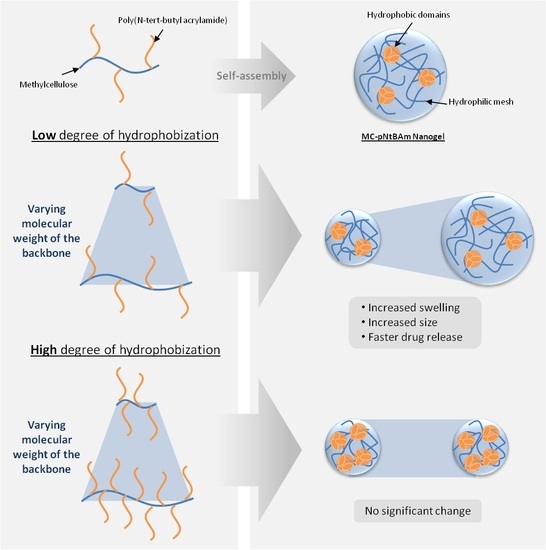