Analysis of Land Use Change and Its Impact on the Hydrology of Kakia and Esamburmbur Sub-Watersheds of Narok County, Kenya

A Case Study of Rainfall and Temperature Trends in San Diego Region, 1985–2017

Prolonged and frequent droughts in Southern California present hazards and uncertainty for the region’s increasing population, resulting in proactive and aggressive water management strategies. The goal of this study is to present a case study of the San Diego region’s rainfall and temperature time series analysis in order to determine annual and seasonal trends and their significance. Rainfall and temperature data from 20 rain-gauged stations were analyzed for the period 1985–2017. A project database was set up for data compilation and quality control, and a Mann-Kendall test for trend analysis was used. Results indicated that rainfall in the region decreased both annually and during the rainy season (November–April) by up to 0.14 mm between 1985 and 2017, although not in a statistically significant manner, except at two rainfall observation stations. Rainfall appears to have increased in many of the stations examined during the dry season (May–October), with an average magnitude of 0.09 mm. Analysis of daily minimum and maximum temperature reveals overall average annual and seasonal increases of 0.07 °C and 0.04 °C, respectively, with statistically significant increases at 10 of 17 for minimum temperature, and 0.27 °C and −0.25 °C with statistically significant increases at 9 of 16 for maximum temperature. Temperature tends to have increased more during the dry season compared to the rainy season. This study reveals an overall decreasing tendency in rainfall and an increasing tendency in minimum and maximum temperatures (although not statistically significant) in the San Diego region between 1985 and 2017, which likely contributed to important management implications for the region’s water resources. View Full-Text
Keywords: drought; precipitation; water supply; Mann-Kendall test; Southern California drought; precipitation; water supply; Mann-Kendall test; Southern California
►▼ Show Figures 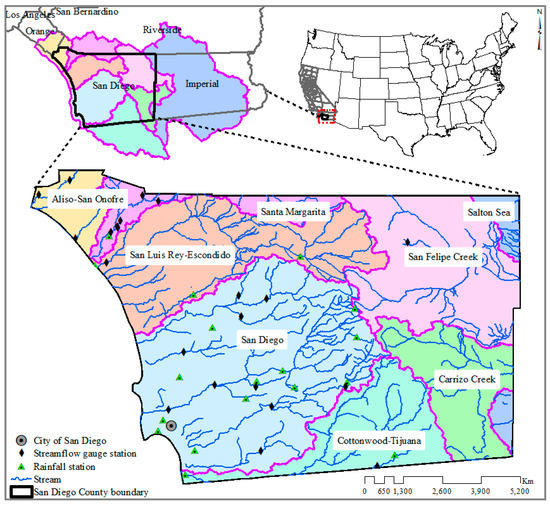