A Quantitative Approach to Evaluate Changes in Hydrologic Conditions of Headwater Streams: A Case Study of Restoration and Recovery Following Longwall Mine Subsidence
Previous Article in Journal

Drought and Desertification in Iran

Iran has different climatic and geographical zones (mountainous and desert areas), mostly arid and semi-arid, which are suffering from land degradation. Desertification as a land degradation process in Iran is created by natural and anthropogenic driving forces. Meteorological drought is a major natural driving force of desertification and occurs due to the extended periods of low precipitation. Scarcity of water, as well as the excessive use of water resources, mainly for agriculture, creates negative water balances and changes in plant cover, and accelerates desertification. Despite various political measures having been taken in the past, desertification is still a serious environmental problem in many regions in Iran. In this study, drought and aridity indices derived from long-term temperature and precipitation data were used in order to show long-term drought occurrence in different climatic zones in Iran. The results indicated the occurrence of severe and extremely severe meteorological droughts in recent decades in the areas studied. Moreover, the De Martonne Aridity Index (IDM) and precipitation variability index (PVI) showed an ongoing negative trend on the basis of long-term data and the conducted regression analysis. Rapid population growth, soil salinization, and poor water resource management are also considered as the main anthropogenic drivers. The percentage of the rural population in Iran is decreasing and the urban area is growing fast. Since the 1970s, the usage of groundwater in Iran has increased around fourfold and the average annual decrease in the groundwater table has been around 0.51 m. The results of the study provide a better ex-post and ex-ante understanding of the occurrence of droughts as key driving forces of the desertification in Iran. Additionally, they can enable policymakers to prepare proper regional-based strategic planning in the future. Desertification cannot be stopped or managed completely, but could be mitigated by the adoption of some proposed sustainable land management strategies. View Full-Text
Keywords: desertification; aridification; drought; groundwater; water scarcity; salinization; Iran desertification; aridification; drought; groundwater; water scarcity; salinization; Iran
►▼ Show Figures 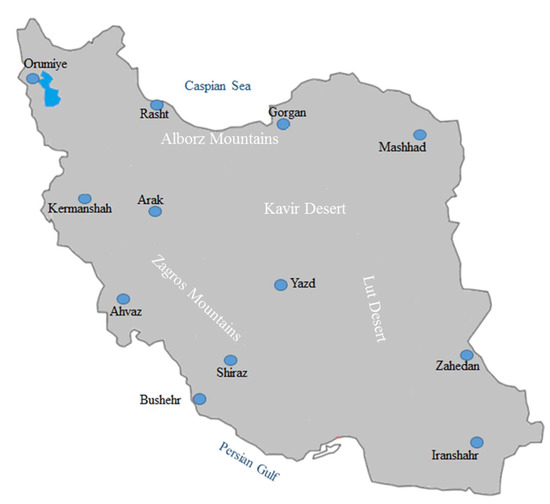