Properties of emulsions such as stability, viscosity or color can be influenced by the droplet size distribution. High-pressure homogenization (HPH) is the method of choice for emulsions with a low to medium viscosity with a target mean droplet diameter of less than 1 µm. During HPH, the droplets of the emulsion are exposed to shear and extensional stresses, which cause them to break up. Ongoing work is focused on better understanding the mechanisms of droplet breakup and relevant parameters. Since the gap dimensions of the disruption unit (e.g., flat valve or orifice) are small (usually below 500 µm) and the droplet breakup also takes place on small spatial and time scales, the resolution limit of current measuring systems is reached. In addition, the high velocities impede time resolved measurements. Therefore, a five-fold and fifty-fold magnified optically accessible coaxial orifice were used in this study while maintaining the dimensionless numbers characteristic for the droplet breakup (Reynolds and Weber number, viscosity and density ratio). Three matching material systems are presented. In order to verify their similarity, the local velocity profiles of the emerging free jet were measured using both a microparticle image velocimetry (µ-PIV) and a particle image velocimetry (PIV) system. Furthermore, the influence of the outlet geometry on the velocity profiles is investigated. Similar relationships were found on all investigated scales. The areas with the highest velocity fluctuations were identified where droplets are exposed to the highest turbulent forces. The Reynolds number had no influence on the normalized velocity fluctuation field. The confinement of the jet started to influence the velocity field if the outlet channel diameter is smaller than 10 times the diameter of the orifice. In conclusion, the scaling approach offers advantages to study very fast processes on very small spatial scales in detail. The presented scaling approach also offers chances in the optimization of the geometry of the disruption unit. However, the results also show challenges of each size scale, which can come from the respective production, measurement technology or experimental design. Depending on the problem to be investigated, we recommend conducting experimental studies at different scales. View Full-Text
Keywords: µ-PIV; PIV; scaled disruption unit; free jet; velocity profile; confinement; high-pressure homogenization; orifice µ-PIV; PIV; scaled disruption unit; free jet; velocity profile; confinement; high-pressure homogenization; orifice
►▼ Show Figures 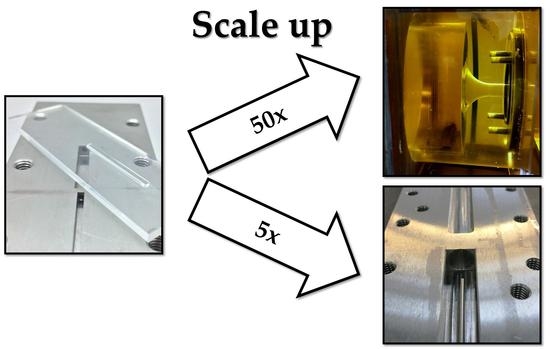