For the preparation and characterization of several layer double hydroxides (LDH) with inorganic interlayer anions (carbonate and nitrate) and nanohybrids, two organo-LDHs were studied in detail. The dodecylbenzene sulfonate (DBS) was used as an organic interlayer anion to modify the hydrophilic nature of the interlayer. The aim of the modification of the layered double hydroxides (LDH) was to change the hydrophilic character of the interlayer to hydrophobic with the purpose of improving its ability to adsorb several (anionic and cationic) dyes from water. These compounds have been used as adsorbents of amaranth (Am), diamine green B (DGB) and brilliant green (BG) dyes. Adsorption tests were conducted using variable pH values, contact times and initial dye concentrations (adsorption isotherms) to identify the optimum conditions for the intended purpose. Adsorbents and adsorption products were characterized by several physicochemical techniques. The results of the adsorption tests showed that the organo-LDH nanohybrids could be efficient adsorbents in the removal of studied dyes from water. Thus, it can be concluded that nanohybrids studied in this work might act as suitable supports in the design of adsorbents for the removal of a wide spectrum of dyes with the aim of reducing the adverse effects on water resources. View Full-Text
Keywords: layered double hydroxide; hydrotalcite; nanohybrid; dyes; adsorption; amaranth; diamine green B; brilliant green layered double hydroxide; hydrotalcite; nanohybrid; dyes; adsorption; amaranth; diamine green B; brilliant green
►▼ Show Figures 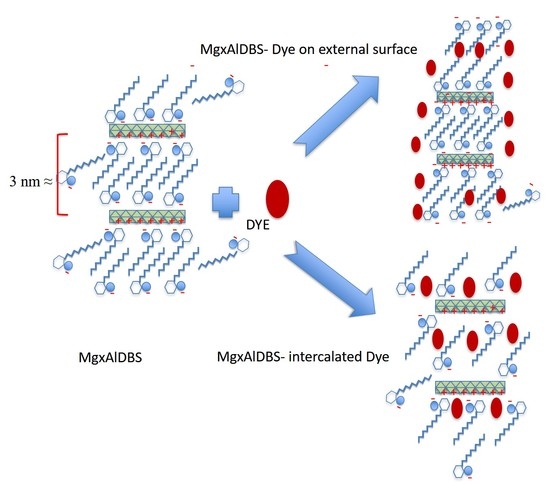