Phosphorus as phosphate and nitrogen as ammonium or nitrate are the main nutrients in wastewaters and agricultural sludges. They runoff easily to waterways and cause eutrophication in water bodies. However, ammonium and phosphate could be precipitated simultaneously and used as recycled nutrients. In this research, dolomite calcined at 650 °C, 750 °C, or 950 °C and commercial MgO were used as precipitants in simultaneous phosphate and ammonium removal from synthetic (NH4)2HPO4 solution and agricultural sludge. Calcination at 750 °C was the preferred option as dolomite was decomposed to MgO and CaCO3 for optimal struvite precipitation. Molar ratios of 1.1–1.6:1–2:2 (Mg:P:N) were employed in the experiments. Very robust ammonium removal was obtained with MgO (57%), dolomite 650 °C and dolomite 750 °C (75%). MgO removed almost all phosphate, while dolomite 650 °C removed 65%, and dolomite 750 °C removed 60% (70% from agricultural sludge). Some part of the phosphate was adsorbed, most likely by CaCO3, during dolomite precipitation. Struvite was the only identified reaction product in all samples after 24 h of precipitation. Calcined dolomite had great potential in ammonium and phosphate precipitation from both synthetic waters and agricultural sludges and the precipitates could be used as recycled fertilizers. View Full-Text
Keywords: dolomite; precipitant; struvite; ammonium; phosphate dolomite; precipitant; struvite; ammonium; phosphate
►▼ Show Figures 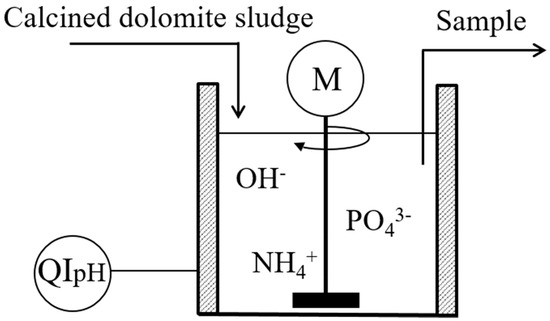