Insights into Elemental Composition and Sources of Fine and Coarse Particulate Matter in Dense Traffic Areas in Toronto and Vancouver, Canada
Next Article in Special Issue

The Use of E-Cigarettes among High School Students in Poland Is Associated with Health Locus of Control but Not with Health Literacy: A Cross-Sectional Study
Previous Article in Journal

Homeostasis in oral environment is mainly provided by saliva, produced constantly by large and small salivary glands [1]. Although 99% of saliva consists of water, it contains also inorganic and organic substances which affect its physicochemical properties [2]. Inorganic components such as sodium, potassium, calcium, magnesium, chlorine, fluorine, iodine, bicarbonates and phosphates are present in saliva in ionic form. Organic saliva components include carbohydrates, lipids, hormones, proteins and non-protein nitrogenous substances. [2]. Individual elements occurring in saliva play a strictly defined role in the proper functioning of the whole organism, nourishing and protecting the surrounding tissues. Saliva glycoproteins moisturize the mucosa and provide protection to oral mucosa against mechanical damage. The presence of buffering bicarbonate and phosphate ions enables to neutralize acids derived from food or that are product of bacterial metabolism, which maintains saliva’s adequate pH value. Saliva contains also salivary amylase, a protein with enzymatic properties and elements presenting antimicrobial activity such as immunoglobulins A, lysozyme, lactoferrin, histamine and leukocytes [2,3]. Moreover, a variety of antioxidants are also present in saliva [4,5,6,7], and the saliva produced by the parotid glands has the highest antioxidant capacity [8].
One of the conditions for maintaining oral environment homeostasis is the balance between ROS (reactive oxygen species) production and the activity of antioxidant systems present in saliva [9]. ROS are mostly generated in cells as a by-product of the mitochondrial electron transport chain, which is dependent on the metabolic status of the cell [10]. Production and effective removal of ROS is crucial in signal transduction, immune defense, matrix remodeling and apoptosis [11]. Low levels of ROS are essential for physiological processes and maintenance of cellular homeostasis [12,13,14]. However, ROS are also an important effector of cell viability control by inducing a cytostatic effect and modulating cell metabolism and gene expression [11]. The excess of free radicals, especially reactive oxygen species, can lead to oxidative stress, which might become the cause of general and local diseases such as periodontitis, diabetes and rheumatoid arthritis [9,15]. Oxidative stress may lead to the destruction of periodontal structures by the degradation of the extracellular matrix of periodontal tissues, and it promotes inflammatory reactions in periodontitis [16,17,18]. Human cells and tissues are protected from the toxic effect of free radicals by special mechanisms including antioxidant enzymatic and non-enzymatic systems. Antioxidant enzymatic systems include peroxidase, catalase, superoxide dismutase and myeloperoxidase, whereas antioxidant non-enzymatic systems include uric acid, reduced glutathione, acute phase proteins, cysteine, ascorbic acid, alpha tocopherol, beta-carotene, retinol and methionine [5,6,7,12,15].
Diverse factors may impact the whole oral environment and composition of saliva is among the most important. Factors that may affect saliva composition include genetic diseases such as Turner syndrome [19], general diseases or tobacco smoking and electronic cigarettes usage [20,21]. Electronic cigarettes are mechanical devices that can be divided into two categories: closed-system and open-system. Closed-system devices tent to resemble traditional cigarettes, are usually disposable and are available in a limited variety of nicotine concentrations and flavors, whereas open-system e-cigarettes are larger in size than traditional cigarettes, can be refilled with e-liquids which are available in a huge variety of flavors and nicotine concentrations and are not disposable after usage [22]. Electronic cigarettes were initially presented as a less harmful substitute for tobacco smoking. However, taking recent research into consideration, this view is controversial [23,24,25,26,27]. It has been proven that electronic cigarettes have a negative effect on oral mucosa leading to death of oral epithelial keratinocytes and periodontal fibroblasts [28,29,30]. The cytotoxic effect is related to oxidative stress and increased concentration of proinflammatory cytokines [30,31]. Chemical compounds found in tobacco smoke and e-cigarettes liquids can dissolve in saliva, leading to disorders in its biochemical composition [21,32,33].
The aim of this study was to assess the influence of electronic cigarettes usage on the antioxidant capacity of saliva.

This study included 110 patients: 35 patients using e-cigarettes (e-cigarettes users), 33 patients smoking traditional cigarettes and 42 non-smoking patients (non-smokers). They were students at the Medical University of Gdansk and young patients, who volunteered for a periodontal examination in the Department of Periodontology and Oral Mucosa Diseases. All participants were generally healthy people aged 20 to 30. Patients with periodontitis and diseases which might interfere condition of oral mucosa like diabetes, disorders of salivary secretion, oral mucosa diseases and people taking medications permanently and treated with antibiotics or steroid preparations in the last 6 months and patients consuming alcoholic beverages were excluded from the research. E-cigarettes users had been using open-system electronic cigarettes with a small nicotine concentration for at least 6 months. Traditional cigarettes smokers were smoking at least 10 cigarettes per day for at least 6 months. People smoking both traditional and electronic cigarettes were not included in this research. The study was conducted in 2018–2019. The study protocol has been approved by the Ethics Committee of Medical University of Gdansk, Poland (NKBBN/161/2014). Ethical aspects of the research followed the World Medical Association Declaration of Helsinki.

Mixed unstimulated saliva was collected into a sterile silicon Corning-type test-tube from all patients who participated in this study. Saliva was collected in morning hours, two hours after the last intake of food or drink. Unstimulated salivary samples were obtained by expectoration in absence of chewing movements.
The samples were clarified by centrifugation (2000× g; 10 min) and immediately stored for the subsequent determination of uric acid, hypoxanthine, xanthine, TAOS (total antioxidant status) and TEAC (Trolox equivalent antioxidant capacity).

The whole mixed unstimulated saliva was analyzed in the biochemical laboratory of Conservative Dentistry Medical University of Gdansk and Department of Biochemistry, Medical University of Gdansk, Poland.
To determine nucleotide metabolite concentration, saliva samples were extracted with 1.3 M HClO4 (1:1 volume ratio) and centrifuged (20,800× g/10 min/4 °C). The supernatants were accumulated and brought to pH 6.0–6.5 using 3 M K3PO4 solution. After 15-min incubation on ice, samples were centrifuged at (20,800× g/10 min/4 °C), and the supernatants were analyzed using high-performance liquid chromatography (HPLC) as we have described previously in detail.
Determination of sixteen nucleotides, nucleosides and bases was carried out using high-performance liquid chromatography and its application to the study of purine metabolism in hearts for transplantation [34].
Liquid chromatographic evaluation of purine production in the donor human heart during transplantation was performed [35].
The total antioxidant status (TAOS) in saliva was measured by the 2,2′-azino-bis(3-ethylbenzothiazoline-6-sulphonic acid; ABTS) assay, which was based on the capacity of saliva to scavenge the ABTS+ radical. The relative inhibition of ABTS+ formation, after the saliva addition, is proportional to the antioxidant capacity of the sample 1. For the measurement of the total antioxidant status in saliva, 15 µL of saliva was diluted with 180 µL phosphate buffer (0.076 M NaH2PO4 + 0.23 M Na2HPO4 in pure water), and then, it was incubated for 10 min at room temperature in a 96-well plate with a 5 µL reaction mixture containing 7 mM ABTS and 2.45 mM potassium persulfate (solved in phosphate buffer: 0.22 M NaH2PO4 + 0.37 M Na2HPO4) solved in pure water, pH 7.2. Prior to testing, the reaction mixture was incubated overnight, placing it in the dark at room temperature. The absorbance in the test and control samples (15 μL saline instead of saliva) was read at 630 nm, using a BioTek microplate reader. Results expressed as a percentage inhibition of the reaction were calculated as follows: TAOS [%] = 100 × (Ac−At)/Ac, where Ac is the absorbance of the control sample absorbance and At is the test sample absorbance.
To calculate Trolox equivalent antioxidant capacity (TEAC), a calibration curve for Trolox standard solutions was prepared. Volumes of 15 µL of 30, 100, 500 and 1000 µM Trolox standards were diluted and incubated with reaction mixture in the same manner as in saliva. Antioxidant concentration, as mM Trolox equivalents (TEAC value), in the saliva samples were calculated on the basis of a linear regression equation obtained from the plotted Trolox calibration curve [36].

The statistical analyses have been performed using the statistical suite StatSoft. Inc. (Tulsa, OK, USA) (2014), STATISTICA (data analysis software system) version 12.0. (2014) from www.statsoft.com and Excel. The significance of the difference between more than two groups was assessed with the one-way analysis of variance (ANOVA Kruskal–Wallis). In the case of statistically significant differences between two groups, post hoc tests were utilized. Correlations were assessed with Pearson and Spearman tests. In all the calculations, the statistical significance level of p < 0.001 and p < 0.0001 has been used.

Electronic cigarettes usage adversely affects the antioxidant capacity of saliva, in comparison to non-smokers, to the same extent as smoking traditional cigarettes. This might present an important clinical risk of oral cavity disorders. Further longitudinal studies on a larger group should be conducted in order to assess how the changes observed in the antioxidant capacity of saliva translate to oral health.

The study was conducted according to the guidelines of the Declaration of Helsinki and approved by the Ethics Committee of Medical University of Gdansk, Poland (NKBBN/161-386/2017, approval date: 11.09.2017). 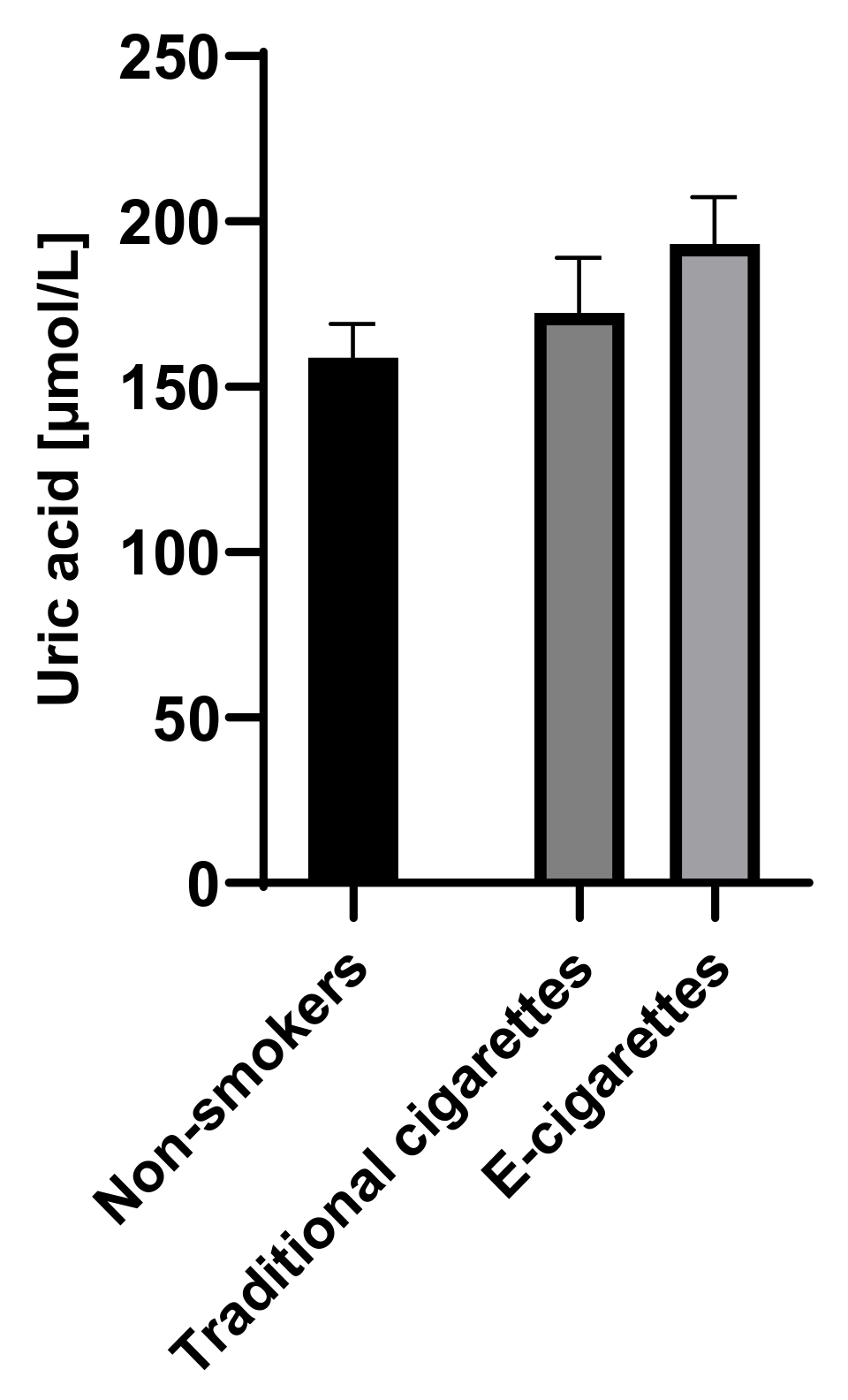 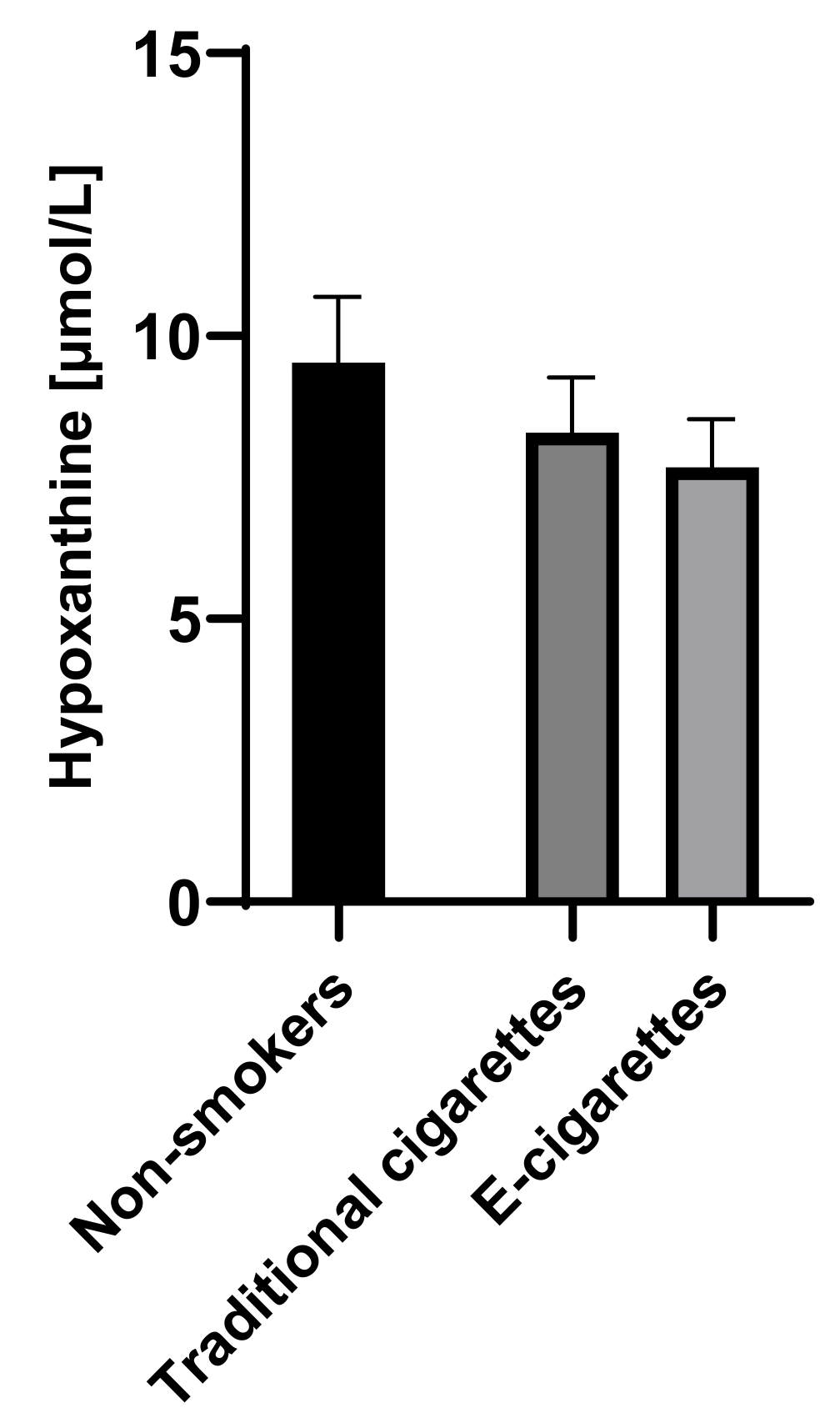 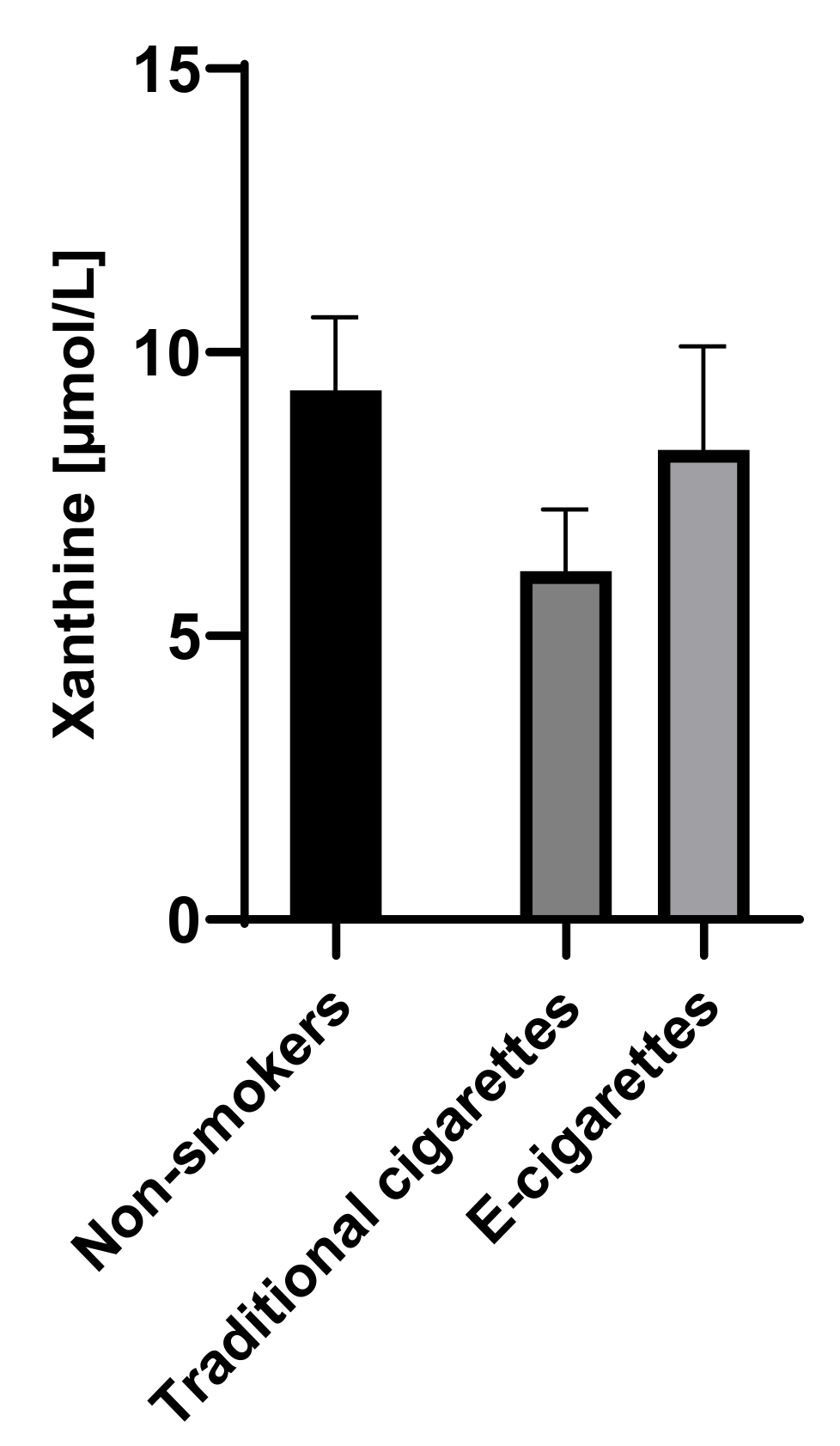 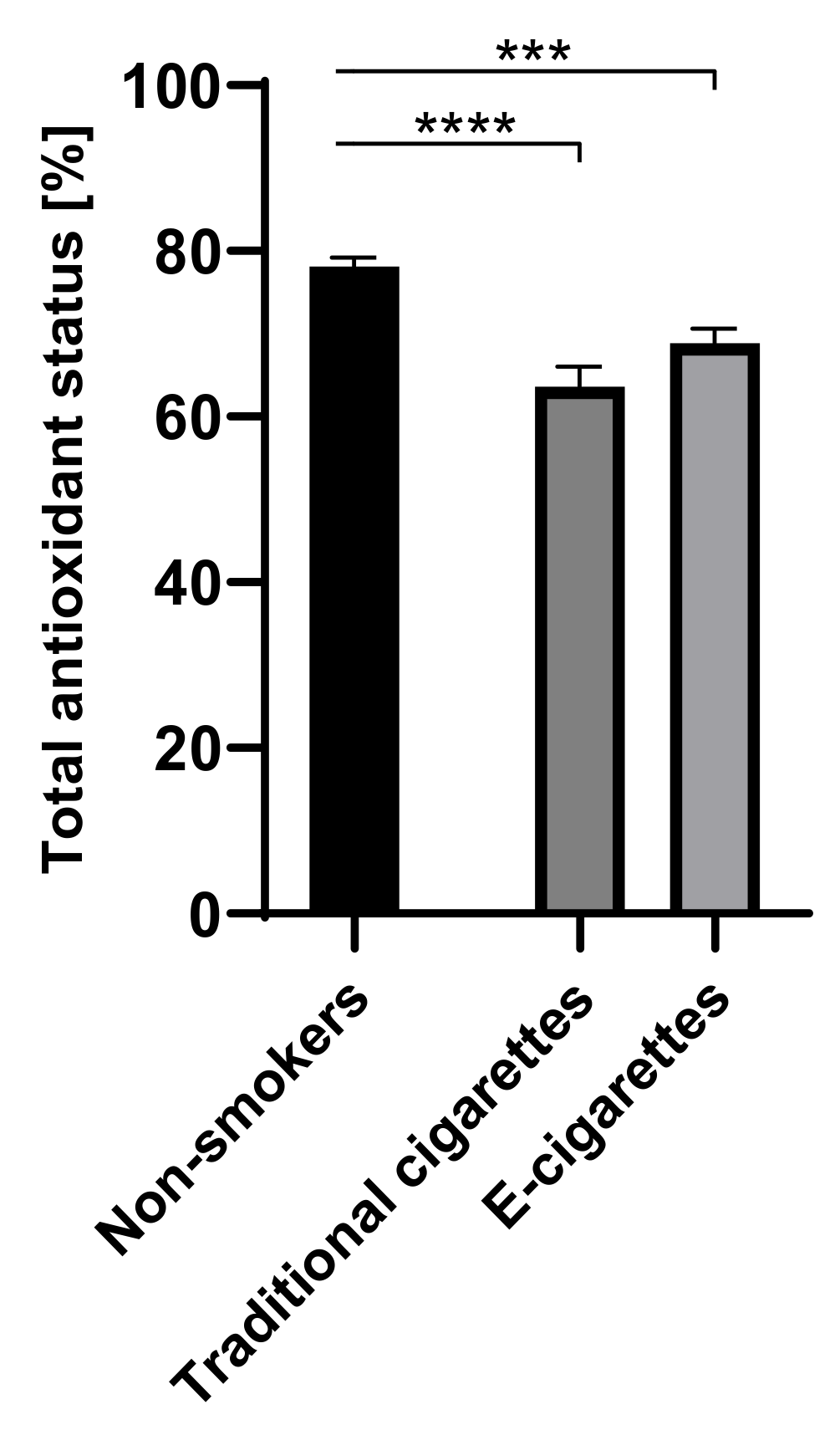 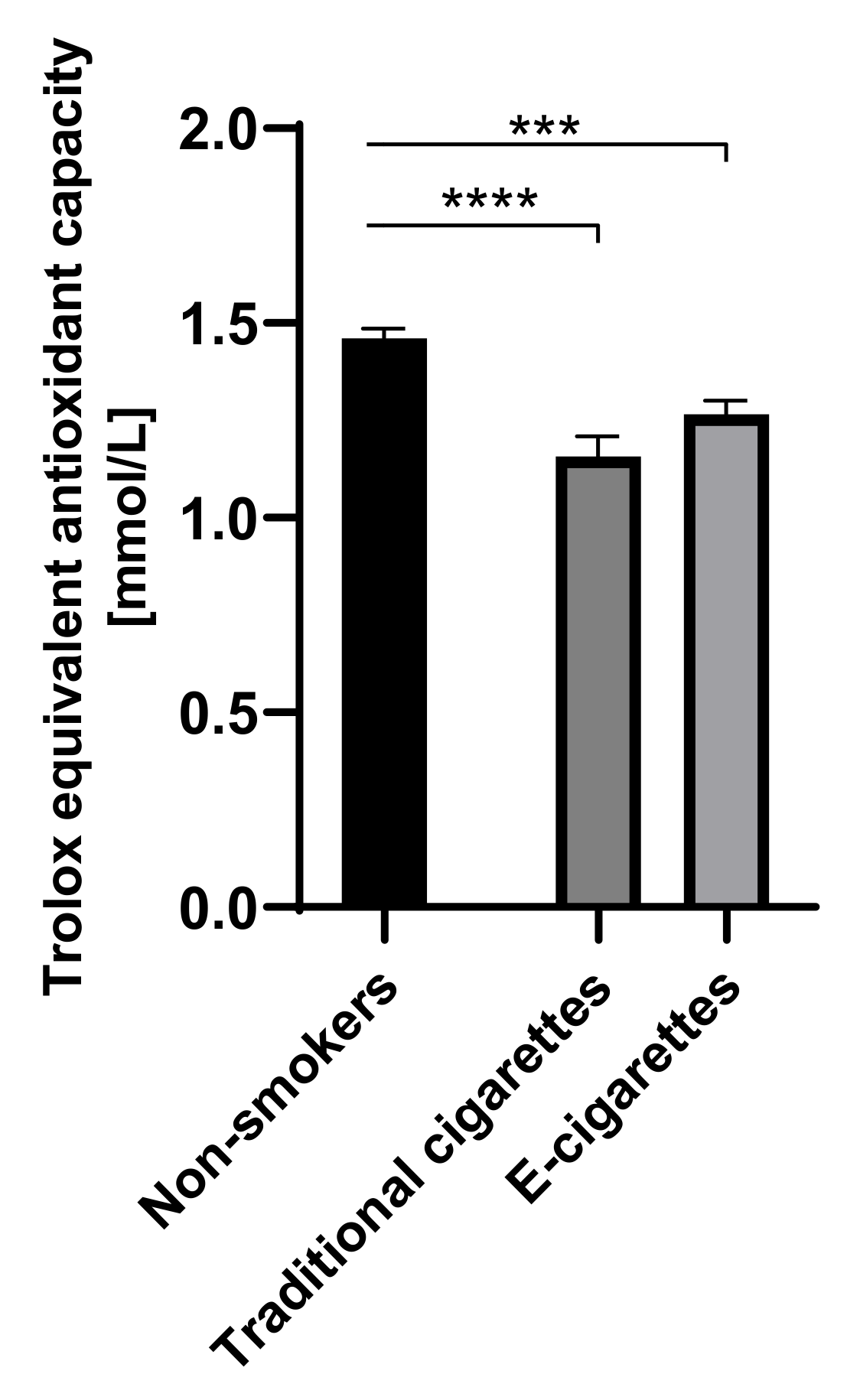 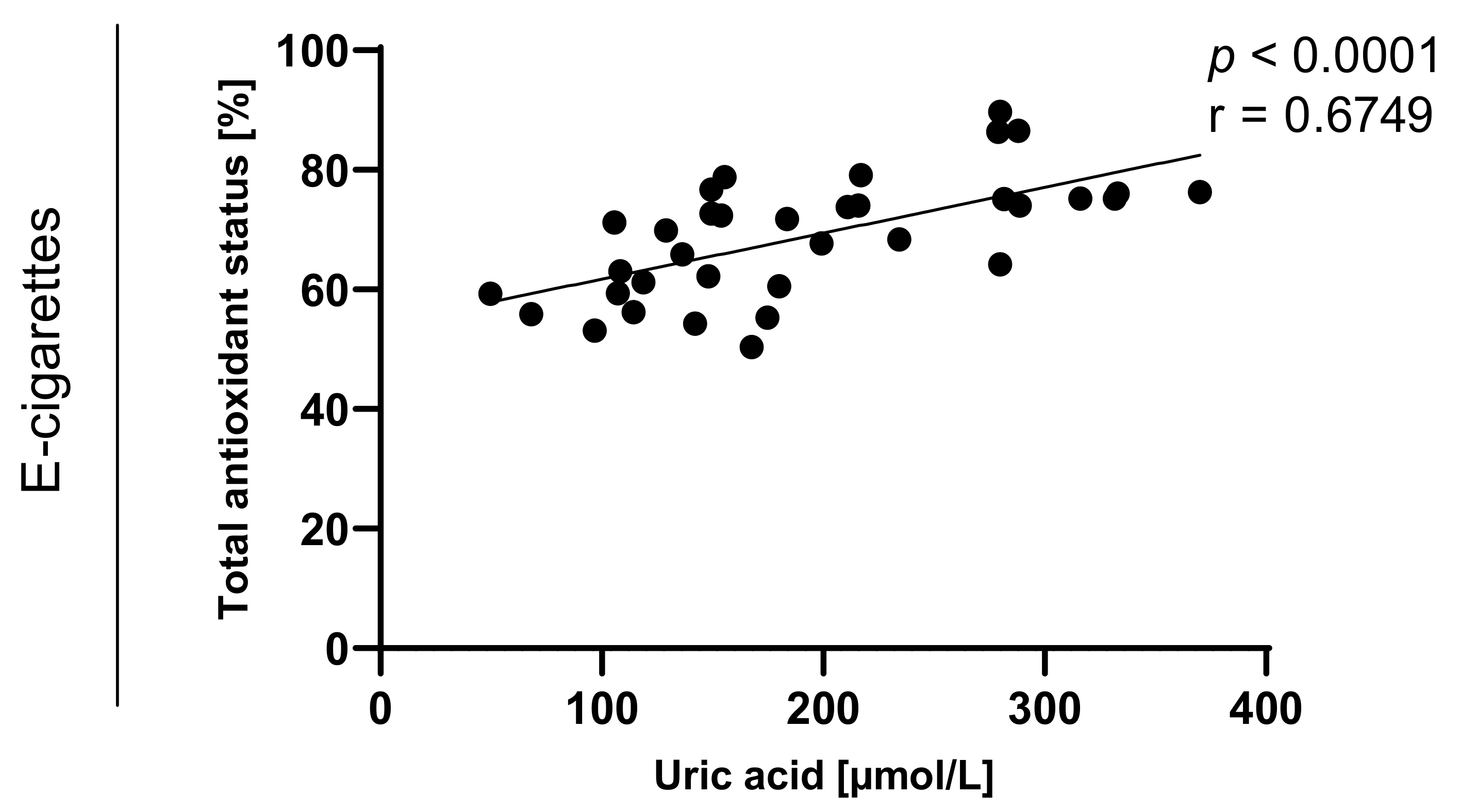 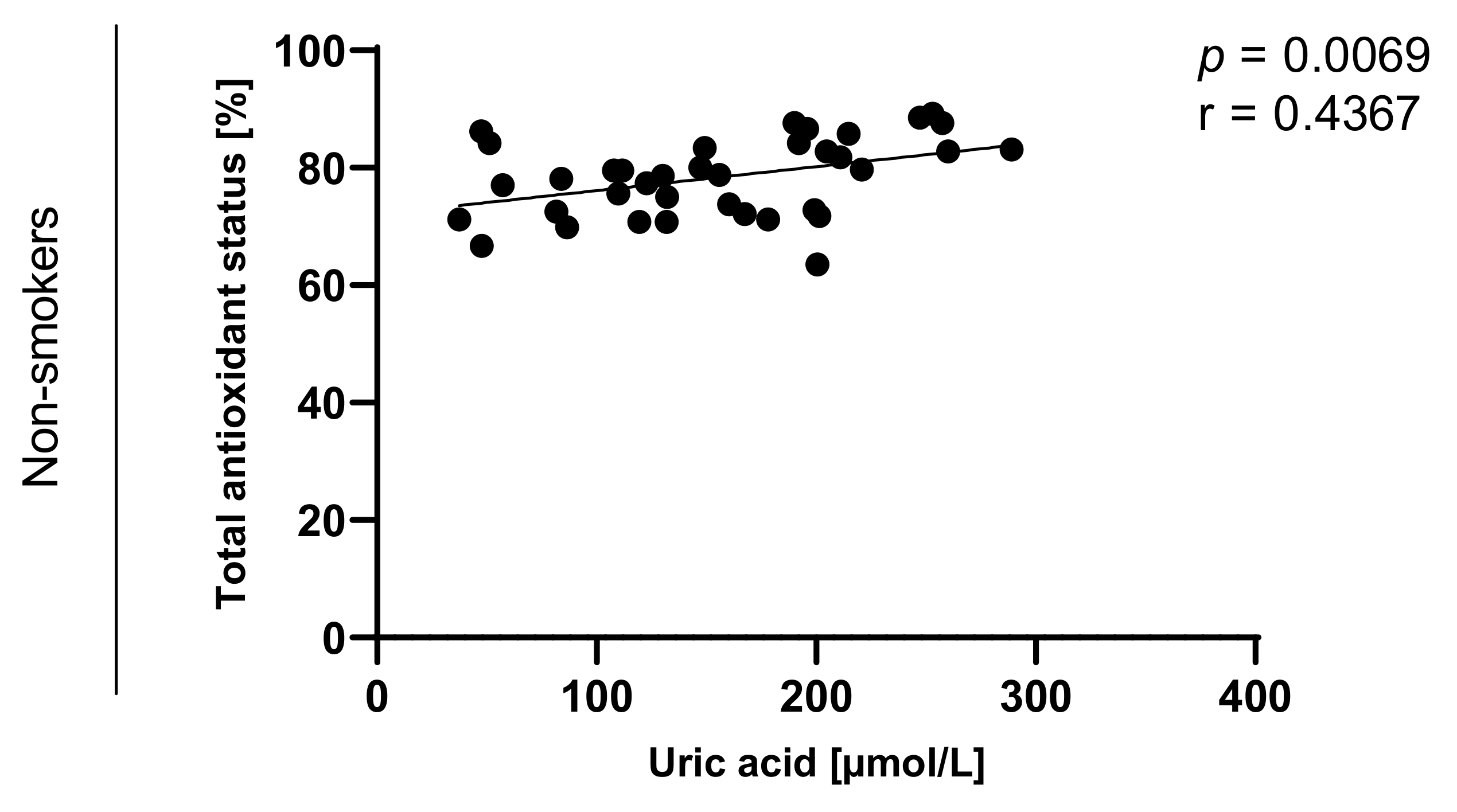