Morpho-Functional Alterations in the Gills of a Seawater Teleost, the Ornate Wrasse (Thalassoma pavo L.), after Short-Term Exposure to Chlorpyrifos

Chlorpyrifos (CPF) is an organophosphorus insecticide commonly used for domestic and agricultural purposes. The risk posed by environmental contamination from CPF is well acknowledged, and it has been detected worldwide in aquatic habitats and coastal areas. In addition, due to its slower degradation in seawater compared to freshwater, CPF is of particular concern for marine environments. Here, we investigated for the first time the morpho-functional alterations induced by CPF on the gills of Thalassoma pavo, a widespread species in the Mediterranean Sea. We tested the effects of two sublethal concentrations (4 and 8 µg/L) after 48 and 96 h. Our study demonstrates that the alterations induced by CPF are dose and time-dependent and highlight the harmful properties of this insecticide. After exposure to the low tested concentration, the more frequent alteration is an intense proliferation of the primary epithelium, whereas after exposure to the high concentration, the primary epithelium proliferation is less extensive, and the most evident effects are the thinning of secondary lamellae and the ectopia of chloride and goblet cells. CPF also modulated the expression of Na+/K+-ATPase. Dilation of lamellar apical tips, pillar cell degeneration, and appearance of aneurysms are often observed. View Full-Text
Keywords: organophosphorus pesticides; seawater fish; gills morphology; ultrastructure; confocal microscopy; Na+/K+-ATPase organophosphorus pesticides; seawater fish; gills morphology; ultrastructure; confocal microscopy; Na+/K+-ATPase
►▼ Show Figures 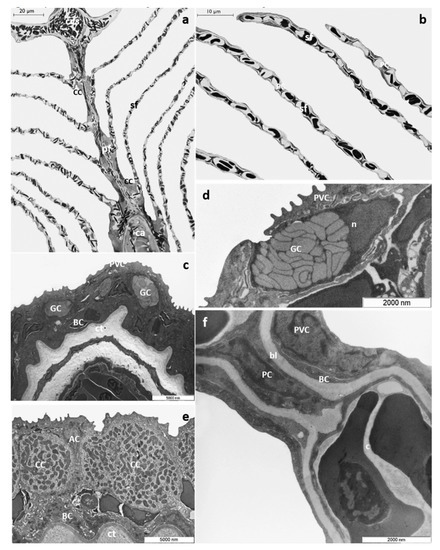 
Macirella, Rachele, Vittoria Curcio, and Elvira Brunelli. 2020. "Morpho-Functional Alterations in the Gills of a Seawater Teleost, the Ornate Wrasse (Thalassoma pavo L.), after Short-Term Exposure to Chlorpyrifos" Toxics 8, no. 4: 97. https://doi.org/10.3390/toxics8040097