The efficacy of hemoperfusion (HP) in patients with acute paraquat poisoning (PQ) remains controversial. We conducted a multi-center retrospective study to include acute PQ-poisoned patients admitted to two tertiary medical centers between 2005 and 2015. We used the Severity Index of Paraquat Poisoning (SIPP) to stratify the severity of PQ-poisoned patients. The indication to start HP was a positive result for the semiquantitative urine PQ test and presentation to the hospital was within 24 h. Early HP was defined as the first session of HP performed within five hours of PQ ingestion. A total of 213 patients (100 HP group, 113 non-HP group) were eligible for the study. The overall 60-day mortality of poisoned patients was 75.6% (161/213). Multivariate Cox regression analysis showed no statistically significant difference in 60-day survival between HP and non-HP groups (95% confidence interval (CI): 0.84–1.63, p = 0.363). Further subgroup analysis in the HP group showed early HP (95% CI: 0.54–1.69, p = 0.880), and multiple secessions of HP (95% CI: 0.56–1.07, p = 0.124) were not significantly related to better survival. Among acute PQ-poisoned patients, this study found that HP was not associated with increased 60-day survival. Furthermore, neither early HP nor multiple secessions of HP were associated with survival. View Full-Text
Keywords: paraquat; intoxication; hemoperfusion paraquat; intoxication; hemoperfusion
►▼ Show Figures 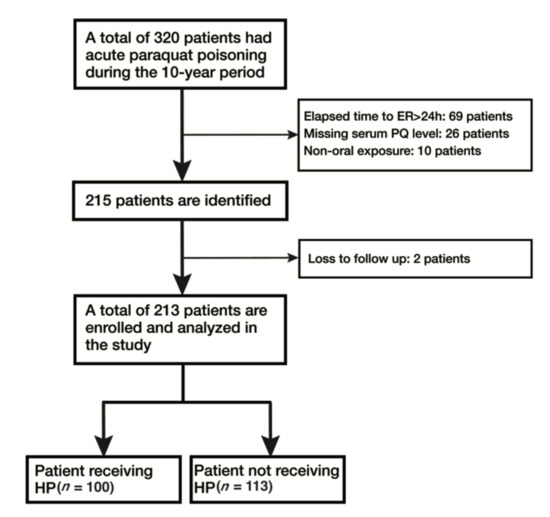