Use of Personal Care Products and Semen Quality: A Cross-Sectional Study in Young Danish Men
Previous Article in Special Issue

The Immunotoxicity of Chronic Exposure to High Levels of Lead: An Ex Vivo Investigation

Recent research has helped clarify the role of cadmium (Cd) in various pathological states. We have demonstrated Cd involvement in pancreatic cancer, as well as the bioaccumulation of Cd in the pancreas. Bioaccumulation and increased toxicity suggest that Cd may also be involved in other pancreas-mediated diseases, like diabetes. Cd falls into the category of “hyperglycemic” metals, i.e., metals that increase blood glucose levels, which could be due to increased gluconeogenesis, damage to β-cells leading to reduced insulin production, or insulin resistance at target tissue resulting in a lack of glucose uptake. This review addresses the current evidence for the role of Cd, leading to insulin resistance from human, animal, and in vitro studies. Available data have shown that Cd may affect normal insulin function through multiple pathways. There is evidence that Cd exposure results in the perturbation of the enzymes and modulatory proteins involved in insulin signal transduction at the target tissue and mutations of the insulin receptor. Cd, through well-described mechanisms of oxidative stress, inflammation, and mitochondrial damage, may also alter insulin production in β-cells. More work is necessary to elucidate the mechanisms associated with Cd-mediated insulin resistance. View Full-Text
Keywords: cadmium; insulin; diabetes; hyperglycemia; hyperinsulinemia; lipogenic; β-cell toxicity cadmium; insulin; diabetes; hyperglycemia; hyperinsulinemia; lipogenic; β-cell toxicity
►▼ Show Figures 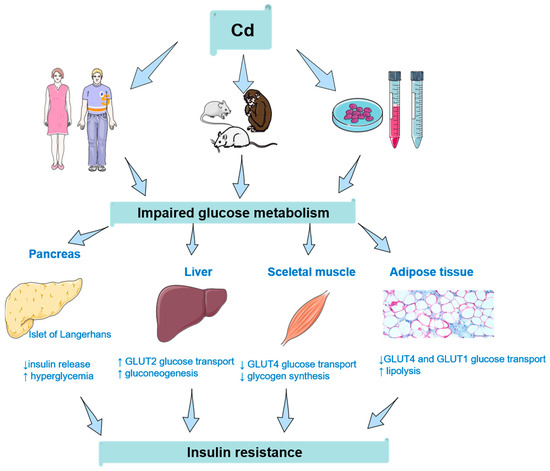