Methods for the Identification of Outliers and Their Influence on Exposure Assessment in Agricultural Pesticide Applicators: A Proposed Approach and Validation Using Biological Monitoring

Roundup®, but Not Roundup-Ready® Corn, Increases Mortality of Drosophila melanogaster

Genetically modified foods have become pervasive in diets of people living in the US. By far the most common genetically modified foods either tolerate herbicide application (HT) or produce endogenous insecticide (Bt). To determine whether these toxicological effects result from genetic modification per se, or from the increase in herbicide or insecticide residues present on the food, we exposed fruit flies, Drosophila melanogaster, to food containing HT corn that had been sprayed with the glyphosate-based herbicide Roundup®, HT corn that had not been sprayed with Roundup®, or Roundup® in a variety of known glyphosate concentrations and formulations. While neither lifespan nor reproductive behaviors were affected by HT corn, addition of Roundup® increased mortality with an LC50 of 7.1 g/L for males and 11.4 g/L for females after 2 days of exposure. Given the many genetic tools available, Drosophila are an excellent model system for future studies about genetic and biochemical mechanisms of glyphosate toxicity. View Full-Text
Keywords: Roundup®; glyphosate; LC50; Drosophila melanogaster; herbicide tolerant; genetically modified food Roundup®; glyphosate; LC50; Drosophila melanogaster; herbicide tolerant; genetically modified food
►▼ Show Figures 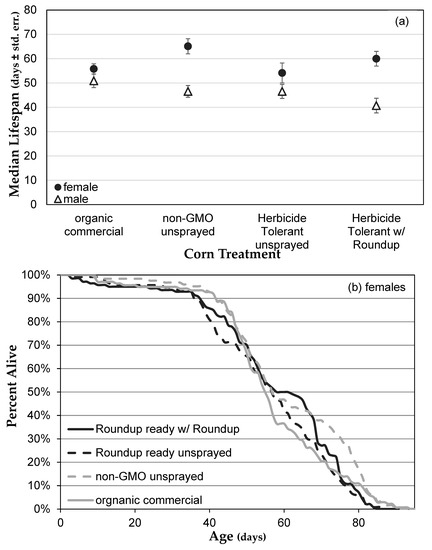